How did that delicious craft beer in your tulip glass get there? Sure, you know how it was created.You are an educated homebrewer. But I am not talking about the process of making the beer. Most of us have got that down (or are working on it).

I am talking about the systems in our country that get the beer from the tanks of your favorite craft brewery to your local bar or your fridge at home. In the US this is called the three tier system.

All alcohol sales, including your delicious double dry hopped IPA, are strictly controlled by our government. (insert witty political commentary). My recent career choices have put me right in the middle of the whole thing.

So how does the three-tier system work? And how, as a dedicated consumer, does it affect you?

The three tier system was born after the very dark and sad time known as prohibition.

I am gonna keep my shit together through tears and rage and touch upon it briefly.

What were the leading causes of prohibition? 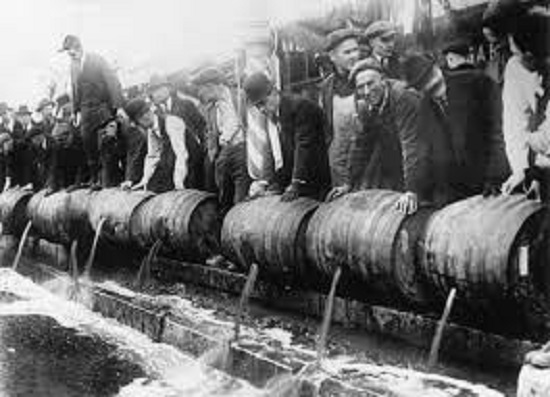 Lack of restrictions in the alcohol industry

With no middle man between alcohol makers and consumers, over consumption was encouraged. The more you sell, the better, right? Which leads to the next cause.

It occurred not long after women gained the right to vote

Women of the time were looking for an increase in national attention on family values. Alcohol was seen as the driving force keeping men at bars and away from their families. Why? Because of the lack of restrictions that lead to overconsumption.

Then, happy days, it was repealed! Cue my happy dance.

Why was prohibition repealed?

Organized crime was out of control

If alcohol was back under government control, it could not be used as the income of crooks.

This country was in the grips of the Great Depression

Tax revenue from alcohol sales could go a long way to helping our economy.

They had the ear of politicians, as per the usual.

What good came out of prohibition?

(Yes there was some good)

What bad came out of prohibition?

So there we have it: alcohol and more important to us, beer, is now legal again.

But the government can’t just say “Hey you can drink again and everything’s just hunky dory.” Nope, they had to add regulations to make sure we as consumers were protected.

The new system our elected officials came up with created three layers (tiers) to set up a safe and efficient method of getting beer into your glass.

So what is the 3-tier system exactly?

1st tier — The supplier or producer

2nd tier — The distributor or wholesaler

There are a few exceptions that can be found within our system. For example, a brew pub that makes and serves beer on premise without dealing with any middle man.

Also, smaller breweries can chose to self-distribute within their local area. The ability of a pub or brewery to serve their own product without going through a distributor depends on the volume brewed yearly and the state they operate within.

For example, in New York State: Breweries that brew under 75,000 barrels a year may sell their beer directly to retailers within their area.

There are still some archaic laws on our books. As a homebrewer, I’m sure you celebrated when the last states in the union finally legalized homebrewing. (Alabama and Mississippi in 2013).

Here are a couple other strange laws that are still on the books:

There are also groups looking to move our system forward within the laws of their state. Here are few examples:

I have worked in different tiers within this system and I think my experiences can shed some light on this system we all answer to.

First, and for the longest period of my career, I worked in the retail tier. I have worked in multiple bars around NYC.

I often went through rigorous training on how to serve customers properly and safely. I find serving safely is the first priority with education on what is being served taking a back seat.

And then we come to my current position. I am a sales representative for a brewery, which puts me right between all levels of our system.

I walk into bars all day and talk to buyers (I know, my life is hard) trying my best to convince them to purchase my products or increase their purchasing of my products.

If they agree with what I have to say, I then go to my distributor representative and ask them to order the beer I sold into the bar.

But there is so much more to it than that…

Sometimes, I even have to walk back into their warehouse and track down my product, point to it so they see they actually do have it, get them to bring it to the entrance, throw it in my car, and hand deliver it to an account.

Based on both my experience and my research, here are the pros and cons of our 3-tier system:

What are the benefits for each tier in the system?

What are the drawbacks for each tier in system?

So is the 3-tier system good for consumers?

You are getting a wide variety of products to your tulip glass thanks to our system.

But, are you getting the variety you would pick for yourself? Probably not. The craft manager at your local distributor does not have the same taste as you. He or she might not even know how beer is made! (Gasp) Seriously I met one… (Not in my city).

Are you missing out on that amazing brewery across the country because your local distributor didn’t want or need to bring them in? Again probably. Getting beer across the country is a huge challenge only large distributors are prepared to do that and they are only going to do it for beer they really love and support.

You have variety because the system prevents the big guys from owning the whole industry. But, are you paying too much for your favorite doppelbock because of dealings between everyone who has bought and sold the product before you? One more time, probably. More pockets to fill requires more dollars.

The system is simple in concept, but can become complicated in practice. It is not all good and not all bad. As consumers are we happy with it? How can we change it if we aren’t? My opinion? Go out, research (aka have a beer), be an informed consumer and let your voice be heard!

Katie has a passion for all things beer. She worked at The Bronx Brewery as the Tasting Room supervisor and helped develop homebrew classes to be taught there. She came to homebrewing through the Cicerone® program. She is a Certified Cicerone® but does not plan on stopping there. She also has taken the BJCP exam. She teaches children’s dance classes in her spare time and used to be a professional dancer herself. Katie resides in NYC where she makes it work in her small apartment with plenty of help from her boyfriend Jon and the homebrewery cat Merlin.