If you have been in a book store (or been online for that matter) and looking in the Food & Spirits section, you will no doubt find a growing amount of beer books.

Recently, author Dave Law sent us a copy of his new book “The Homebrew Handbook”. I have perused through a few of these, and I have my issues with many of them. Would Dave’s book shine through or would it come through as an also-ran?

Let me explain that I’m not against books

I should tell you that my first true exposure to homebrewing came via “The Complete Joy of Home Brewing” by Charlie Papazian. This book really captured my attention. It kept me company on a business trip, and I breezed through it in a weekend. I was hooked.

Charlie helps you take your first steps into home brewing, teaches you the basic equipment you need to know, and encourages you all the way through that first batch. He also helps you get acquainted with the various ingredients you can use, the different styles, and the all important mantra “Relax. Don’t Worry. Have a home-brew.”

Since that book, I have tried out many other books. Some were slated just towards equipment making, some just towards recipes and clones of commercial beers. A common denominator is the vast amount of assumptions made by these authors.

While I no doubt think that they believe in their product, they too often leave us fledgling home brewers (who AREN’T making their own recipes so are relying on repositories such as these books) behind by assuming we automatically know how to scale recipes based on percentages and automatically know which yeast would pair best with the recipe.

Heck, if it wasn’t for Charlie Papazian, I would have to go figure out which of the 5 different DME-Grain conversion calculators are the most accurate.

That’s a little more trial and error than what I want in a book I purchased to use right away.

As I flip through the book, what I appreciate first off is the author’s thought process on what you need and what is “nice but not necessary”. Dave doesn’t go overboard in necessities, but also is realistic in that not everyone is going to want to build their own kettles/fermentors/stirring mechanisms.

He takes a very realistic approach for newly minted all-grain home brewers, and this is much appreciated.

I should take a moment and mention that this book is 100% geared towards all-grain brewing. If you haven’t made it that far in your brewing, then the intro to this book is a nice, simple, precise primer for helping you make that jump. Aside from some personal dislikes in layout and font choices (this isn’t really that kind of review), the book is a solid addition to anyone’s home brewing library. That is to say, if the recipes hold up.

Putting the Book to the Test 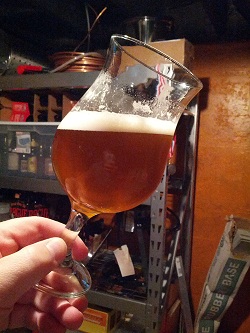 My attempt at the Saison

The proof, as they say, is in the pudding. In this case, we have 75 recipes with which to try the abilities of these recipe designers so as to add to (or subtract from) their merit as published authors.

There are a wide variety of options to try in The Homebrew Handbook, from traditional pale ales and bohemian pilsners to european malt bombs to hopped up IPA’s. One of my favorite Belgian styles to date (#2 in my list in fact) is a nice Saison. It’s such a nice sessionable ale to help cut the heat of summer. As I hadn’t brewed one in a while, and my taste buds (as well as my wife) were strongly encouraging me to do so. I decided to go with Dave’s Saison recipe.

You will have to go get the book for the full recipe, but I would like to point out a few “interesting” points. According to the late Michael Jackson, a Saison is a “Seasonal summer style in the French-speaking part of Belgium. A sharply refreshing, faintly sour, top-fermenting brew, sometimes dry-hopped, often bottle-conditioned, 5.5 – 8 by volume.” Some common adjuncts include orange peel, coriander and ginger. Many of the other “spicy” notes come from esters during fermentation at higher temperatures.

This particular recipe, built on a 5 gallon(US) scale, included the peel of two oranges. As you can imagine, this upped the citrousy tones. However, this wasn’t enough, so Dave included the peel of one lemon as well, which added some acidity to the mix. Just to make sure that we don’t miss out on the spiciness of a good Saison, we are instructed to add some black pepper.

In my opinion, this was a stroke of genius. The pepper comes through about the middle of the palate and gives you a measure of allure missing in some of the commercial varieties on the shelf.

Then things get weird.

According to the stock recipe, a relatively small amount of star anise is added. If you aren’t familiar with star anise, I have two words for you: black licorice. This comes through quite prominently in the nose as well as the finish of this beer.

Right after kegging, the anise was quite evident, a punch in the face if you will. I’ve let it sit for about 2 weeks, and the anise has mellowed some, but it’s still there, and unfortunately takes enough away that it’s hard to get through more than one glass before switching it up.

The book is very well put together, and has more than a few pluses to Dave’s credit. It’s definitely a book to consider if you are looking to add to your home brew library. Does my experience of the Saison shelf this book permanently? I would say no. I’ve got 74 other potential gems to get through. As for the Saison, well I would consider brewing it again, conveniently misplacing the star anise.

Billy (other Billy, Wd, etc.) is a transplanted Southern boy currently living in Southwest Missouri. Since being exposed to the homebrewing community, he has been building his passion for the full variety of beer styles. Not one to be tied down to one style, he continues to branch out in brewing styles, making each recipe his own, building a base of recipes for all to enjoy. Look out for building projects too, as RIMS has become a fascination of this fledgling homebrewer.