The 5 Strongest Microbrews – In a Can

What comes to mind when you think of beer in a can?

I think light, yellow, and flavorless. With a few good brews in me, I’ll call it drool or piss water.

Good beer, i.e. microbrews or craft beer, is served in elegant bottles. Cans are reserved for that inferior crap and their only use is as a signal for beer we don’t want to buy.

But all that is changing.

You may have heard the news, but close to 100 craft breweries now can their beer. This is due to the fact that:

But what about that metallic taste? Don’t worry about it. Modern cans have a spray coating so the beer never actually touches the metal.

Let’s blow the f’ing lid of the stigma attached to canned beer. We’re going to turn the stereotypes on their head and show that just because it’s in a can doesn’t mean it’s light and watery.

So proving that that big beers do come in cans, here are the 5 strongest canned microbrews:

Note: The research comes from the database at CraftCans.com, a great site that is dedicated to the canned craft beer revolution. 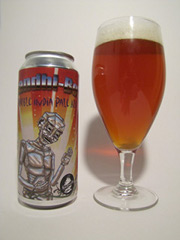 “Gandhi-Bot is an intensely hopped Double India Pale Ale brewed with a blend of three varieties of American hops. 85 IBUs, this beer is brewed for those of us who need an aromatic and flavorfully hopped beer.”

“We brewed this beer originally at the end of 2008 as a farewell to growler sales. As usual, we underestimated the demand for the first Double IPA in Minnesota. We brewed the beer again in the spring and released it as a draft only beer. It was originally called 16 Grit, a size of abrasive grit used at the old Abrasive factory that once stood where the brewery now resides.” 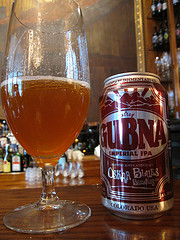 “Emphasizing that complexity of character can arise from simple elements, this ale is made with 3 malts and 1 hop.Post-fermentation dry hopping allows the 10% ABV monstrosity to gently coax the citrus rind and grapefruit aroma to join the 100 IBUs already present. This beer will greet you with a pungent citrus blast, provide a spicy yet round middle and finish with a brisk, clean bitterness.”

“The Very Noddy Lager was a special brewing made for Doug Booth’s 40th birthday. They took the Black Noddy recipe and doubled up on hops and malt, calling it an Imperial Schwarzbier. This beer has a big, rich chocolate-colored head, and pours an attractive opaque black. It smells like cocoa powder, and bitter chocolate, and tastes of rich roasted malt, chocolate and coffee, with a hint of dark cherries. This is a powerful brew, at 10.5% alcohol by volume, and while you can certainly taste that, it’s more subtle and drinkable than you’d expect.” 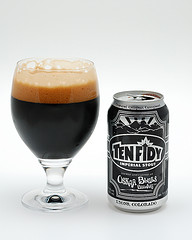 “Ten FIDY Imperial Stout – This titanic, immensely viscous stout is loaded with inimitable flavors of chocolate-covered caramel and coffee and hide a hefty 98 IBUs underneath the smooth blanket of malt.  Ten FIDY (10.5% ABV) is made with enormous amounts of two-row malt, chocolate malt, roasted barley, flaked oats and hops. Ten FIDY is the ultimate celebration of dark malts and boundary-stretching beer.”

With the big rush into canned beer there’s no doubt this list is time sensitive and will be replaced any day. But here on 6/2/2010, it is a damn fun thing to look at.

What do you think of craft beer in cans? Have you had any of these metal monsters?

Raised in Virginia, lives in Southern California. He swears he's the only "malt head" in SoCal, the land of hops. Billy is a BJCP judge, award-winning homebrewer, and lover of all things fermented.