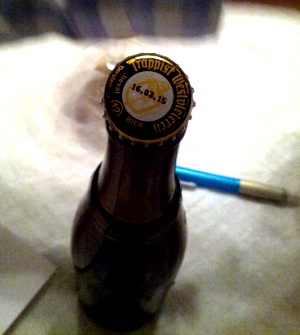 “Westy 12” as it’s known by most, is continually near the top of beer rankings, occupying the top seat the majority of the time. But how much of that is due to its scarcity?

Westy 12 is brewed by the Belgian monks of St. Sixtus Abbey. It’s only available at the Abbey, so not many people get to try it. Cases go for hundreds of dollars on eBay and a one-time release in the U.S. last year fetched $85 for a six-pack.

How did I get a chance to try it? My good buddy Chris went to Belgium last year and brought some back. He was kind enough to share it with a few of us. You’ll remember him and Jeremy from the IPA Blind Tasting we did a little while back.

I invite you to read Chris’s excellent post on Pintwell for the details of our blind tasting including all of the beers that we tried and how they scored.

If you want the short version: Westy 12 wasn’t picked as the top beer by any of the five people involved. The winner was La Trappe Dubbel (my personal favorite as well). Admittedly not exactly the same style as Westy 12, but in the same family.

Westy came in around third place. I must say that it was very difficult for me to pick a winner out of the top 3. They were all excellent. Looking at my notes, what stood out to me about Westy was its superb aroma. It has a very strong berry & grape nose. I described it as similar to “juicy juice.” Jeremy said “Laffy Taffy.” We meant this in a good way. It was a tough call between Westy and the La Trappe, but I felt the La Trappe had more depth of flavor. The St. Bernardus was excellent too, but personally I felt it had too much alcohol.

So is Westy 12 an incredible beer? Yes. Should you kill yourself trying to get it? No. Try it if you have the chance, but there are other beers that are just as delicious.

Have you tried Westy 12? What did you think?