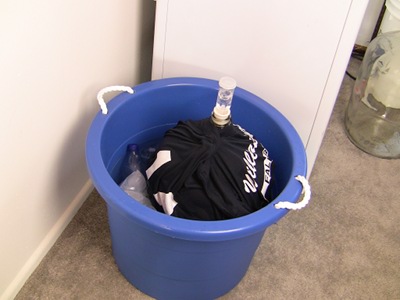 Fermenting your homebrew at the right temperature is one of the critical factors in making good beer. Let the temperature get out of whack, and the yeast will punish you.

Since 95% of homebrewed beers are ales, temperature control is usually not an issue. Ales are perfectly fine fermenting at room temperature between 70-75 degrees F. It’s when you use lager yeast that things get tricky. These Eskimos like to work between 50-55F. That’s tough for a homebrewer without specialized equipment.

My latest homebrew is a Kolsch, which uses an unusual blend of ale and lager yeast (White Labs WLP080). It still requires lower temperatures, 65-70F, but that is much more manageable than 50-55F. I aimed for 63-65F because reviews said that the strain works best in that range.

A swamp cooler is a crude fermentation chamber used to keep lower temperatures. It is usually made out of a cooler, bin, or other large container. The idea is that you put your fermenter into the container with cool water and use ice packs to maintain low temperatures.

As you can see in the picture below, my swamp cooler consisted of:

I kept the shirt wet for the evaporative cooling effect. The picture below shows the inside of my set up: 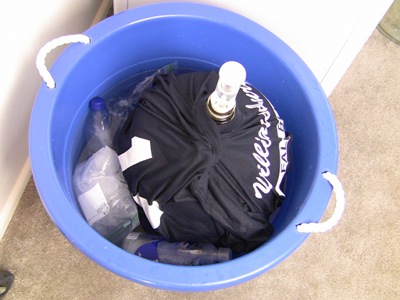 The goal was to rotate the frozen objects in and out to try to maintain my temperature range between 63-65F. There were 2 main challenges with this:

#2 was my biggest concern. It’s often said that preventing wild temperature fluctuations is more important than the temperature itself. Making it more difficult was the fact that I was out of the house 8-9 hours per day with no Keebler Elves to manage my swamp cooler.

Here are the readings for the first 2 1/2 days.  WARNING: DO NOT LET YOUR KIDS LEARN CHARTING FROM THIS P.O.S.! The time axis is not to scale and I mainly took readings on the high side. Still, it is telling… 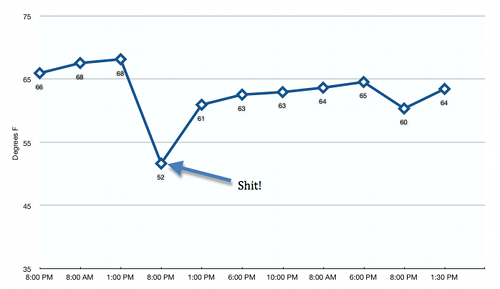 At first I was worried that I wouldn’t be able to get the temperature low enough. 2 water bottles brought it down to 66F from room temperature (72F), but it went no lower.  Frustrated, I replaced the 2 water bottles with 2 new ones and 2 Ziploc bags.

Oops! 52 degrees! At least I knew it could go low enough…

Once I got the routine down it wasn’t hard to keep the temperature between 60-65F. The beer is 1 1/2 weeks in and I’ve maintained that range the entire time. Not the ideal consistency, but acceptable.

If you (or someone else) can be around enough to rotate ice packs, then this is a great way to do cooler fermentations. Just be forewarned that anything in the 50-60F range will require very close attention. I actually think this tub type arrangement is a better strategy for fermenting ales between 65-70F. This is much easier to maintain and will yield cleaner tasting beer (less esters) than one fermented at room temperature or above.

Will I do it again? Damn right.

But I have big plans for upgrading the next one. (Hint: it involves a cooler).

Here are some more Fermentation Chamber Options that might be helpful, and some Keg Jackets to further research.

Have you tried anything like a swamp cooler to lower your fermentation temperature?