Spiced Porter for the Winter Holidays

In my last entry, I mentioned that I named a beer after my cat, Duncan. Well, in a roundabout way, I did. I modified a recipe from a friend who called it “King’s Porter.” And since porters are a dark beer, and my cat is black, and since King Duncan is a character in my favorite Shakespearean play, I thought calling my recipe King Duncan’s Holiday Porter was a good idea.

It’s good to be the king

The point is, it’s a special spiced beer that suits the Thanksgiving and Christmas seasons very well. It can serve as a dessert beer or as the perfect toast to the festivities. And it’s a welcome change from the mulled cider, sparkling champagne, and (heaven help us!) eggnog which all seem to flood the final weeks of every year.

I’m usually not a big fan of flavored beers. I do make a lemon wheat every summer, and I’ve experimented with a vanilla milk stout, but aside from these, I steer clear of pumpkin ales, fruit additions, and most other things that seem to be designed to hide the fact that I’m drinking beer. If I want something that’s flavored with chocolate and raspberry, I’ll order cheesecake. Still, when it comes to offering a beer for a party or family gathering, going the extra mile shows you care.

A special seasonal beer should be A) special and B) suitable for the season. So with those criteria in mind, I set about thinking of the aromas and tastes that defined the season. Here’s what I came up with:

Okay, scratch that last one; no one wants sticky pine sap on their hands, much less in their beer. But I had a pretty good list otherwise. Those flavors evoked warmth, festivity, and some beautiful nostalgic feelings. I wanted to combine those in a rich, roasty, dark beer. 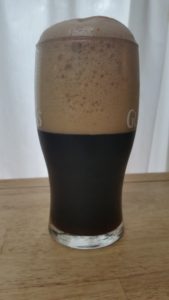 It has an aggressive head

Additions in beer can be tricky. Too little can result in a lack of the very influence you want. Too much can completely ruin a beer. I’ve had fruit beers that tasted more like wine coolers, and citrus IPAs that I was tempted to name after Duncan’s litter box. Yeah, “catty” is a thing that happens with overusing certain hop strains, and catty doesn’t mean the beer is making slyly malicious comments behind someone’s back. I’ve also found that it’s easier to tweak additions when there’s too little rather than when there’s too much. Think of cooking; if a dish needs more salt, or more oregano, you have a sense of how much to add. But if there’s too much salt or oregano, how much should you take away next time?

I got lucky and managed to get it right the first time with this porter. But I was being extremely conservative with the additions, as you’ll see in the recipe below. Another advantage I had was knowing my base recipe was good. Working with that solid foundation gave me more confidence in choosing the proportions of the spices.

While everyone’s tastes and preferences are different, the BJCP Style Guidelines for spiced and seasonal beers make it clear that the underlying beer style should be enhanced and complemented by the additions, not overwhelmed by them. The beer itself should always be the star of the show, with the spices and fruits providing some grace notes. This is another good argument for “less is more.”

Another factor, for me, was that I wanted to use more than one addition. A small amount of cinnamon might get lost in a robust porter, but combined with nutmeg and cloves, the three could band together and stage a hostile flavor coup. I took that into consideration when choosing the measurements, too. 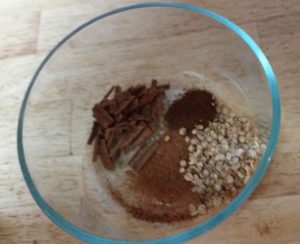 I’m in the habit of brewing 2.5 gallon batches as well as 5 gallon ones. I like the variety this gives my pipeline, and it doesn’t overwhelm me with too much of one style at a time. Another advantage for me is that I can test new recipes and techniques without ending up with 5 gallons of a less-than-desirable beer. My 5 gallon batches are reserved for the tried-and-true stalwarts at Fedora Brauhaus. Also, for a specialty beer like this, a small batch is all I need to get through the holidays.

If you’re interested in scaling up to 5 gallons, simply double the ingredients. I would caution, however, that while this will work nicely with the base ingredients, I can’t vouch for how well the spices will work when doubled.

1 fresh cinnamon stick, broken (I use a meat mallet to break it into coarse shards)

Flavor (add to beer at bottling):

You can see that the brewing aspect of this recipe is fairly routine. I do like to mash this one at a slightly higher temperature than my usual 155F. Mashing at a range between 158F and 160F brings out the malty flavors and gives a better mouthfeel to the finished product. For this year’s batch, I fermented in a controlled environment at 60F. I recommend brewing this in the summer, to give it a few months to condition and mellow. This batch was brewed on August 10 and bottled on August 30, conditioning in my basement until ready. Even then, I would have preferred a longer conditioning time.

The key to timing the spice additions is brevity. As with the amounts themselves, a little too much can become way too much very easily. I recommend adding them no more than three days before bottling. Remember, we’re looking for something subtly evocative of coming home for the holidays, not National Lampoon’s Christmas Vacation.

It may be too late to add this recipe to your celebrations this year. But the base porter can be enjoyed any time, and even serve as a springboard for other additions, such as chocolate, vanilla, or fruit (I know I said I’m not a big fan of flavored beer; that’s just me. If you want to do it, go for it!).

And maybe, come next summer, you’ll remember this recipe, and you’ll put it together for the 2018 holidays. I hope you do, and I hope it gives you and your loved ones as much pleasure as my family and I get from it.

Have a safe, happy holiday season filled with the warmth of family and friends. Enjoy whatever you’re drinking responsibly, and have a prosperous, healthy new year!