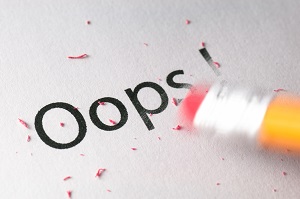 Earlier this month I brewed my first sour beer. I have read books, taken classes, and tasted many a sour beer (good and bad). None of this adequately prepared me for brewing my first sour, but it did give me the confidence to try.

Before I get down to how it all went wrong, you should know something about my home brewery:

I am a female homebrewer who brews with my boyfriend, Jon. I would like to follow that sentence with the fact that brewing a sour was my idea! (Look forward to more articles zooming in on this topic of women in brewing.)

For our first attempt at a sour beer, we decided our best course of action was to use a kettle souring process. We had a few reasons for using this technique:

We wrote a recipe for a sour smoked saison we named “Smokezon Mother Pucker”.

Probably way too much going on for one beer, but why the hell not, right? If you’re gonna do it, do it all the way.

We figured this would be a two day project. A Sunday/Monday deal. Mash one day, boil 24 hours later.

Or so we thought…

The first issue arose during the mash. Our strike temp was too low, so we had to add extra liquor to increase the temperature.

We were aiming for a lower mash temp for a very fermentable wort, considering this was supposed to be a saison. However, we were still too low. After boosting the temperature we continued on with the hour-long mash.

Lesson: Missing the mash temperature is not the end of the world. Have extra hot water at the ready just in case. The problem was easily resolved. No need to stress, yet.

We were eager to use our newest pieces of equipment on this brew day (because why not complicate it even more?).

We got a Chugger pump for Christmas and chose to use the pump to vorlauf and transfer to the kettle. During the vorlauf process, we also wanted to mash out and halt all enzymatic activity before starting the souring process. When I say we, I mean Jon — he was very determined. But it made sense. We didn’t want conversion of any sort still taking place and also didn’t want anything else odd in our beer, just the sugars and the lacto we would be adding soon.

To use the pump we had to remove the mash tun lid for recirculation and then prime the pump.  Before doing so, we added hot liquor to raise the temp to mash out during the vorlauf process.

But, as soon as we started the pump we lost 10°F.  As a result, we had to add even more hot liquor to get closer to mash out temps and recirculate even longer. Then we had to sparge properly, all of which took well over an hour. Fun.

Lesson: If you are using new equipment, be prepared for unexpected results. It’s best to try out new gear on a familiar recipe versus something experimental. 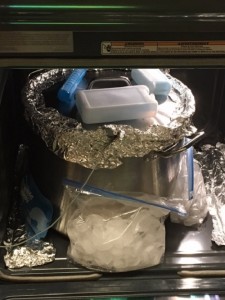 Our attempt at chilling the pot

We didn’t think ahead enough about chilling the wort to the correct temperature for lactobacillus action. We knew we would need the temperature much lower to get the lacto going, but didn’t contemplate how exactly we were going to do that.

In retrospect, we should have either used our immersion chiller to get the wort down close to 110°F or run the wort through the plate chiller (also a new toy) on the way to the kettle to get to that temp. Instead, after transferring to our lidded kettle that had been purged with CO2, we let the wort sit there for a couple of hours.

Not the worst thing ever but a real pain in the ass at the end of our mash day.  Eventually, we hit the right temp. We tossed in a healthy handful of wheat malt and sealed everything up with foil.

Lesson: Go over your plan before starting. Write it down and make sure it’s realistic.

We had tested using our oven with a lamp in it as a means of temperature control. We added a pot full of water to see if the temp held steady. We used a single, 150-watt bulb, left the pot in overnight and it worked. The temperature of the water dropped to 108°F or so, which was a little bit lower than we wanted after twelve hours, but close enough for us to know it was a usable option.

On the day of the real brew, we decided to up the temperature control by covering all the vents of our oven with foil. This proved to be over doing it.

Initially, the temperature seemed to be holding well around 115°F, but when we woke up the morning after the mash we were up around 123°F.

We knocked the temp down, uncovered a few vents and let it go for the rest of the day.

We took our pH that morning using test strips and it was right around 4.5 — exactly where it was the night before.  We took the pH again when we got home that evening (when we were planning on boiling) and it had still not budged, 4.5 again, and there was little noticeable sourness despite a clear change in odor and some visible signs of activity.

This was likely because we hadn’t given the lacto that is naturally found on the grain husks the right environment in which to work.  We wanted more sourness and realized we needed to let the souring process continue.

Lesson: Once you have tested a method, don’t changed it. Adding more variables will create inconsistencies.

Side Mistake: Well it was a good night, I think…

I came home somewhat, let’s call it over-indulged, that night. I don’t remember why or how, perhaps after-work beers. Regardless, there was no brewing happening Monday night no matter what the pH was.

So we had to wait until Tuesday night. When I got home Tuesday afternoon I took the pH.  It finally dropped — 3.8. Not as low as I was hoping. Then I tasted it. Quite sour. We were a go for our boil, Finally!

Mistake #5: Read up on your yeast strain!

We used Wyeast Belgian Saison yeast. Now, maybe using this yeast in and of itself was not a mistake, but after researching it and speaking with a number of people about their experiences, we found it is notorious for stalling out after initial fermentation.

This yeast gave us some trouble. Our OG was 1.064 and the yeast managed to get us down only to about 1.048 before stalling for a week.

We went back and forth with what to do. Finally we decided to use a packet of Belle Saison dry yeast we had in the fridge to jump-start our fermentation.

Perhaps it was the low pH or perhaps it was only having fermentation going at room temperature, but either way we needed to get things moving.

Even with the second pitch of yeast things went very slowly. We added heat by wrapping the fermenter with an old heating pad from my dancing days.

The beer finally finished around 1.014. Not as dry as we wanted, but it no longer tasted like drinking lemonade, so we went with it.

Lesson: Research any new ingredients you are going to use. Ask around.

We made this beer for an event: the Homebrew Jamboree that was part of NYC Beer Week. I knew about this event for months in advance. We gave ourselves plenty of time to make this beer, but who brews this much of an experimental beer for an event? It could have gone terribly, terribly wrong… and nearly did.

(We did have a backup plan. We had a few other beers in kegs that we could have brought if it came down to it.)

That being said, it ended up a success!

I know it does not sound like that’s possible, but the beer came out very nice, if a bit over sour. It was a big hit at the Jamboree. We kicked our five gallon keg and got tons of compliments.

I feel like the most important point to make is:

Lesson: I liked our beer and I had fun making it. (Whether Jon thinks so or not, since he gets the brunt of my stress most brew days). Isn’t that why we all homebrew? To make something WE want to drink? To stress over all these “mistakes” isn’t necessary.

A wise man once said something about relax… don’t worry…