Sometimes I’m asked if brewing beer, like breaking up, is hard to do. I always say, “I wear loafers because I don’t feel like bending over to tie my shoes. If brewing were hard, I wouldn’t bother.” But the real answer is that it’s not difficult; it’s challenging. Whether you’re using HME kits or brewing original all-grain recipes, there’s always something new – be it ingredients, styles, equipment, or improvements on your process. What keeps the hobby interesting for me is the wide-open possibilities for experimentation. 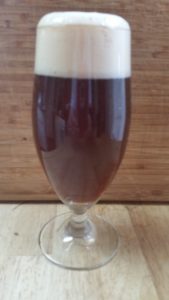 Okay, I know that, back in my January article, I warned about going Mad Scientist, but that was advice for first-time brewers. With just a little experience, you can don the lab coat and goggles, brush up on your maniacal laugh, and confidently risk blowing up the neighborhood for the sake of experimenting with your beer.

I wanted to try my hand at brewing a smoked beer, and I wanted to smoke the grains myself. When I mentioned this to someone, he said, “Why smoke your grains when you can buy smoked malt?” To which I replied, “Well, why brew my own when I can buy craft beer?” That guy missed the point entirely. This was a new challenge for me and something that would continue to keep homebrewing interesting.

As I looked further into the project, I discovered a few things:

My equipment – From BBQ to Beer

There are a couple different designs for smoking, as anyone who barbecues will tell you. There are vertical smokers, with the heat/smoke source directly below the food. There are in-line smokers, with the fire kept in a side box and the smoke drawn horizontally and up through the cooking chamber via a chimney. And if you don’t have one of these rigs, you can still use a traditional kettle grill, banking the coals and wood to one side and keeping the meat (or in my case, the grains) off to the other side. It’s even possible to smoke using a gas grill. A little DIY with some aluminum foil results in a handy tray or perforated packet for holding the wood. Use offset heat, same as with a kettle grill, and get ready for some smokey goodness.

All these options will work, you just need to know your pit. If you’re new to this, I’d recommend smoking some meat first, to get familiar with the equipment and get comfortable with what you need to do to maintain proper temperatures. Oh, and you’ll have barbecue, too. Win!

I have a very good vertical smoker. It’s helped me make mouth-watering ribs, savory smoked chickens, and even a few crowd-pleasing Thanksgiving turkeys. I was confident it would fit the bill in smoking my grains.

Before I put on the lab coat and goggles, I needed to pick a style. For some reason, I’ve had good luck with ambers, and I also thought this classic style would naturally embrace the smoke, instead of the smoke seeming tacked-on. I wanted the whole thing to be a unified experience. In plain English, I wanted to avoid the beer-drinking equivalent of a cheap toupee.

So I had to start with the recipe. It needed to be a good beer on its own. After all, there’s no sense enhancing a sub-par product. I could have used one of my other amber recipes, but I really enjoy recipe formulation (there’s that experimentation again). Also, this would give me another nice recipe in the pipeline, even without the smoke. Who doesn’t want to split 2-for-1?

I brewed the beer as a stand-alone and was very pleased with it. I couldn’t wait to see how it worked with the smoke. But I had to decide which wood to use. After consulting the BJCP Guidelines again, I felt hickory would give it the proper barbecue feel I was after. Hickory smoke has an association with ribs, which would be my first choice for a food pairing. It would also enhance the flavors of the base beer and balance well with them, creating a full, complete taste experience.

When I smoke meat, I use wood chunks. Smoking ribs or a turkey takes hours, and chunks last longer. One thing you don’t want is to keep opening the lid to add wood. That just allows smoke and heat to escape. You ain’t cookin’ if you keep lookin’.

But for this, I opted for hickory chips. I felt I’d get better heat control, and for a short-term project like this, chips were probably more economical. I soaked the chips in water overnight. Waterlogged wood chips smolder and smoke and are less likely to flare up and burn quickly. 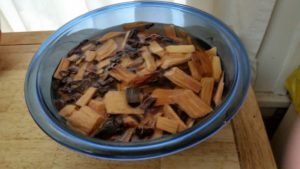 I was pleased to see that all my grains fit in an aluminum roasting pan. This was only a 2.5 gallon batch, so if I wanted to brew this on a larger scale, I’d either need a deeper pan, or else I’d have to divide the grains into two pans and do them separately. This is where a larger in-line smoker would be handy, since I could do both pans at the same time and get more consistency throughout the grain bill. I’d have a tough time convincing my wife it was essential brewing equipment, though.

I had mentally set my ideal temperature for 100 degrees. I didn’t want to scorch or burn or cook my grains, and I figured 100 degrees wouldn’t be much different than holding them in my hand, temperature-wise. This didn’t work out, as the amount of charcoal I needed to keep the chips smoldering raised the average temperature to around 130. Sometimes experimenting can make a mad scientist sweat right through his lab coat.

No harm was done at this temperature, as it turned out, and I was careful to gently stir the grains every ten or fifteen minutes, to keep the ones at the bottom from scorching. I also figured it would distribute the smoke more evenly throughout the grains, though I wound up smelling like smoke, and I was only standing nearby. 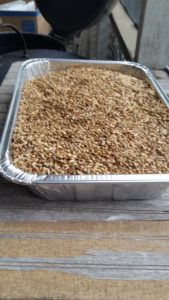 In addition to stirring, I kept a spray bottle of water nearby to spray the grains occasionally. This kept them from parching. It also came in handy to quell flare-ups. Even after soaking overnight, the chips can ignite and start to flame. So if you’re using a vertical smoker or a kettle grill with offset coals, be watchful and be ready. You don’t want to be running around like the Keystone Kops while your grains scorch and burn.

The amount of smoke concerned me. This wasn’t like smoking ribs, when the more smoke you have at the outset, the better. I wanted a more uniform amount throughout the process. I worried that too little would result in a wimpy flavor that wasn’t worth it, and that too much would overpower the malt profile or, worse, give it a bitter, acrid taste that would ruin it.

My original plan was to smoke the grains for an hour, but after 45 minutes, the coals began dying, and I began losing heat. Rather than add more coals for a mere 15 minutes, I removed the grains and let the embers die out.

For better or worse, this phase of the experiment was complete. Thankful that the villagers hadn’t stormed my property with torches and pitchforks, I returned the grains to their zipper bag to await brew day.

The beer turned out very well. The aroma was a gentle mixing of the dark roasted Amber malt, the satisfying bread-like smell of the Biscuit, and the intriguing, primal smell of the hickory smoke. The blend of flavors while drinking was well-balanced and satisfying, like drinking a refreshing beer by a bonfire. I had done it. Starting with a base recipe that satisfied me, and smoking my grains myself, I had created a beer that invokes barbecue, campfires, and warm summer evenings. My inner Mad Scientist chortled with glee.

Yes, it’s a little more work over a longer period of time. Sure, there’s an extra investment in charcoal and wood chips. And it’s really tough to find a hunchbacked assistant who will work on weekends. But all those things just make this beer that much more satisfying when I drink it. And if your friends are impressed that you brew your own beer, imagine how impressed they’ll be with home-smoked beer. Trust me; eventually they’ll come to welcome the flashes of lightning and claps of thunder that keep occurring whenever you make it.