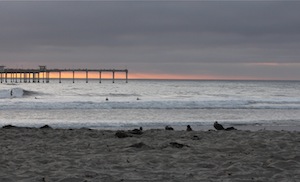 When you hear talks about the best beer cities in America, the same names always come up: Denver (represent!), Portland, Philly, Asheville, and San Diego.

I recently had the pleasure of visiting the last one as my girlfriend and I took a much needed vacation to Southern California. It was our first time there, and I wanted to see what all the beer talk was about.

Now I do want to point out that this was not a dedicated beer trip but rather a couple’s beach vacation where beer played a side role. I didn’t do any private tours or interviews and I missed a lot of great beer venues. Besides, who can afford to do a beer-only vacation? I’m jealous of you.

We stayed in Ocean Beach which is a hippie surf-bum area (we’re not big on fancy resorts). Other people criticize it for being dirty, but I think it has character. 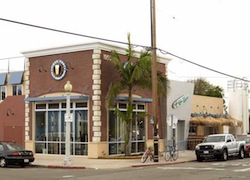 Besides the beach, the best part about this place is that Pizza Port Ocean Beach was only 3 blocks from our hotel. Pizza Port has a few brewpub locations and they are owned by Port Brewing, the same company as The Lost Abbey. They all make fantastic beer and Pizza Port Carlsbad in particular tore it up last year at the Great American Beer Festival.

The OB location is no slouch itself. They have some delicious big hoppy beers in the traditional west coast style and even a tasty little summer ale called Osprey. The place seems to be a hit because it gets absolutely slammed at night and it’s hard to find seating, even with the cafateria style community tables.

We loved Pizza Port OB and went there a few times. 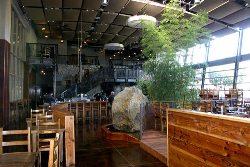 My mother lives in Carlsbad not too far from the Stone brewery, so we took the train up there for lunch and a tour. I’ve heard this place is impressive, but holy shit.

Huge granite boulders, fire pits, trees in the dining room – it’s quite a spectacle. Outside there is a 1-acre garden with a babbling brook and a nature trail. You won’t find a more relaxing place to drink a beer.

We ate outside where I had to quickly down a 9.2% Japanese Green Tea IPA before catching the tour. The beer is a collaboration between Stone and two Japanese breweries with the proceeds going to the Japanese relief efforts, so I felt good about my buzz.

The Stone brewery is just as impressive as the dining area and garden. If you’ve been on any craft brewery tours, you can tell that these guys are big. It’s a 55,000 sq. ft., 120 bbl facility. The tour guide was entertaining and at the end they give you free tasters of the Pale Ale, Smoked Porter, IPA, and Arrogant Bastard.

The place is a gem, and my Mom even bought me Arrogant Bastard socks from the gift shop. How cool is that?

Pizza Port and Stone were our main destinations, but when we weren’t on the beach or visiting landmarks we did check out some other good beer stops. Here are notes on locations & beers:

What did I think of San Diego?

San Diego really is a great beer city and beautiful overall. I compare everything to Denver, and I still think we have the edge in beer. I’m also curious as to how what breweries people count as in San Diego. Stone and The Lost Abbey are a good 30 miles from downtown San Diego so if you applied that same radius to Denver you would include Boulder and Aurora (Dry Dock).

I do think San Diego has an edge with the average bar’s beer selection. That’s really a great way to judge a beer city – not by the craft beer geek bars, but by what’s on tap at the “Average Joe” bar. From our experience every restaurant had a least a few great craft beers on tap.

So San Diego has some great things going on and I can’t wait to return. I love the Rocky Mountains but growing up on the East Coast, sometimes I need some beach to go with my beer.