We’re full into summer now, and full into the excuses to take a break from brewing.

To paraphrase Eddie Cochran, there ain’t no cure for the summertime brews. It’s difficult to get enthused about spending five or six hours making a hot environment even hotter, especially when it’s so handy to buy a couple of six-packs of a good craft beer.

I used to take a vacation from brewing in the summer, too, but my pipeline suffered drastically. Then I found there are things you can do to tailor your brewing to the conditions. Getting an early start, before the temperature really rises, is one way. There are also styles that are meant to ferment in warmer temperatures. And finally, you can reduce your brewing time by using extracts.

Extracts?! Did he say extracts?! Heresy!

Woah, hold on. I still prefer all-grain recipes, so don’t break out the pitchforks and torches just yet. But even though AG definitely gives you more control over your ingredients, the idea that you can’t make good beer from extract is strictly the phonus bolonus. Some homebrewers only use extract recipes, and their beer is fine. Better than fine, in fact. Extract recipes have done well in competitions.

And the important thing is, you’ll be brewing.

Say it with a saison

It’s one thing to say that a yeast or a style can be fermented “hot.” It’s another to find ones that thrive in higher temperatures. One such style (and the accompanying yeasts) is a saison.

Not only can a saison be fermented in the 70s, 80s, or even 90s, the resulting flavors and high, effervescent carbonation make this style one of the best beers for summer and early autumn imbibing.

I created a saison recipe using extract, and I get such a great combination of black pepper, citrus, and bubble-gum, it’s a shame I only make it once or twice a year. I call it Saison D’etre. That’s an obvious rhyming play on the term “raison d’etre.” But while the latter means “purpose,” the name of my beer translates to “season of being.” And that’s appropriate, I think. It’s time for summer to be the season of being a brewer.

The raison for the saison

When my daughter got married a couple of years ago, she asked me to brew some beers to serve at the rehearsal dinner. I agreed, even though I thought it was a little crazy to rehearse dinner (I’ve been eating dinner for years, and I’m pretty good at it). The Saison D’etre was one of the beers I made.

I brewed it in late May, to be ready by early September. Even though I usually ferment in my Silence of the Lambs-looking basement, I felt the mid-to high 60s was too cool for this style, so I brought it upstairs. I kept it in the closet where I keep some of my brewing equipment. At that time of year, the ambient temperature was in the mid-70s. 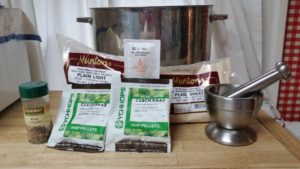 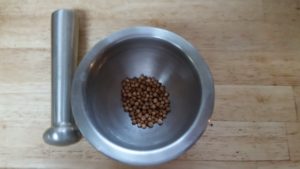 For this article, I brewed a batch on May 20th. The notes which follow are from this batch.

I ended with three full gallons of wort, which I chilled to 74 degrees before pitching the yeast. I began my brew day at 8:15 am, and ended at 10:50 am. This includes pre-and post-washing, and putting everything away. Quite a difference from a five or six hour all-grain brew day.

After primary fermentation, the temperature dropped to the 73F range. My FG was 1.010,  slightly lower than anticipated. My ABV on this batch then became 6.5%; slightly higher than projected, but still mid-range for a standard saison.

I bottled the batch on June 6. I prefer to bottle this style, because I can increase the carbonation by batch priming, rather than trying to get proper carbonation from a keg. The style calls for a volume of 3.2, rather than the usual 2.5 range of many other styles. The resulting effervescence in the finished beer enhances the aromas and flavors.

Two years ago, when I brewed this for the rehearsal dinner, the time of year and temperature conditions were remarkably similar. I might have felt more confident had the temperature spiked in the low 80s, but I was forced to rely on the weather. Still, beer happens, doesn’t it?

I was very nervous, not only because I wanted the beer to turn out well for my daughter and her fiance’s dinner, but also because complete strangers would be drinking my beer. What would they think of it?

I needn’t have worried. I was pleased with how it turned out. It paired well with the food, and at the end of the evening I was approached by a guest.

“They tell me you brewed this beer?” he asked.

“I thought it was great! Blue Moon is one of my favorite beers, and this reminded me a lot of Blue Moon.”

Okay, yes, my homebrew was compared to a “crafty” beer, brewed by a huge beer conglomerate. But consider this: