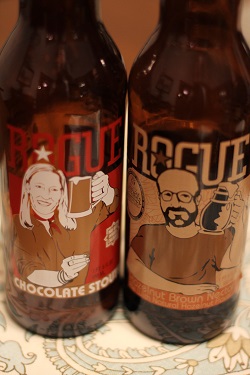 Not long ago I was listening to the Jamil Show Pale Ale episode on The Brewing Network.

At one point Jamil went on a tangent (this happens a lot) about a beer blend he tried at the Rogue Ale House that blew his mind. It is a 50/50 mix of Rogue Chocolate Stout and Rogue Hazelnut Brown Nectar.

I was a little surprised to hear Jamil (who is a professional brewer) recommend a beer cocktail. Brewers tend to frown upon adulterating their beer by mixing it with something else. So when he praised this beer mixture, I figured it must be good. He made the blend for the co-hosts and they all agreed it was fantastic.

So the other night I picked up a bomber of each beer and poured half of Sebbie (the woman on the chocolate stout bottle) into a glass along with Chris Studach (the guy on the brown nectar bottle) on top (this sounds kinky).

IT WAS SO GOOD!

Seriously, this blend is delicious. The chocolate, hazelnut, roasty, caramel flavors all complement each other beautifully. It’s sweet but not too sweet thanks to the stout. I honestly enjoyed this blend better than either beer on its own. Tasty McDole even called it a “panty dropper” – hear that fellas?

It turns out this Rogue Chocolate Stout and Hazelnut Brown Nectar blend is a favorite at Rogue and there is even a name for it – Snickers. I didn’t think of it tasting like a Snickers Bar at the time but thinking back on it I can see the resemblance.

When digging around online about this beer cocktail I came across another Rogue creation called Spontaneous Sebbie. It’s a blend of Rogue Chocolate Stout and Hanssens Oude Kriek.

I already had the stout so I figured why the hell not? I tossed an Oude Kriek into my basket along with the other two beers. 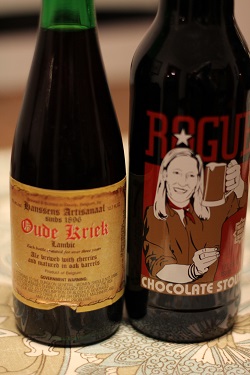 Not bad, but not as good as the Snickers. Spontaneous Sebbie makes for a good dessert beer. The cherries and chocolate go well together. But Hanssens Kriek is an awfully sour beer and the Chocolate Stout is awfully roasty. These two characteristics didn’t jive and the blend had a pretty rough finish.

So try Spontaneous Sebbie if you get a chance but don’t expect too much. The Snickers on the other hand is a must try. Has anybody had one? What did you think?