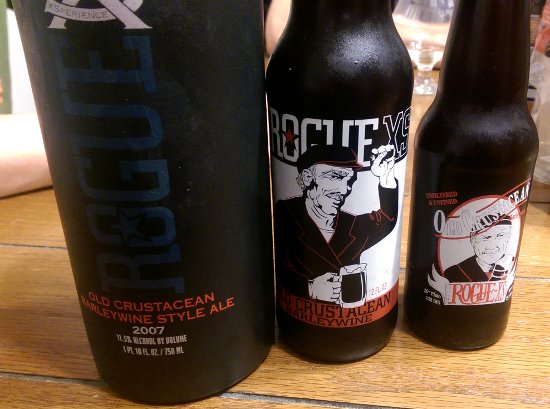 It’s extremely educational because learn how the beer changes over time. Don’t forget that most beers are best fresh. Only certain styles should be aged. That doesn’t mean you can’t do a vertical with any style, just don’t expect most beers to improve. In a really geeky sort of way I’d love to do a vertical of Pliny the Elder. IPAs should never be aged (to improve the flavor that is) but it’d still be interesting to see how the beer evolves.

If you’re like me and are low on both planning abilities and willpower, you don’t have a beer cellar packed full of vertical tasting opportunities. Fortunately for people like us there are companies who “Cellar the beer so you don’t have to!”

In this case it came directly from the brewer. Rogue sells a 3 year vertical of their Old Crustacean Barleywine. There is a 2007, 2003, and 1999 included. It comes to about $120 for 9 bottles, which includes 3 bottles of each vintage. If you get two of your buddies to go in on it with you you’ll get three bottles (one of each vintage) for $40. Pretty damn good deal if you ask me.

Imbibing with me were my usual drinking buddies Jeremy and Chris from Pintwell. Here’s what we thought.

2007 – By far this was the most bitter of the three. Surprisingly harsh. Jeremy picked up a good deal of oxidation on this one. I did not, though I’m not very sensitive to it. That’s the fun part about tasting critically with other people. It helps fill in the gaps.

2003 – The thing that jumped out to me was the alcohol flavor. It was the booziest of the three. Not hot, just a nice & smooth warming alcohol presence. Still a fairly intense bitterness despite being over a decade old. To be honest it was a bit of a turnoff.

1999 – The old guy. They’ve sure grown the bottle size since then. I actually enjoyed the ’99 the most. The bitterness was low on this one and not harsh like the others. It didn’t completely hide its age. The flavors were somewhat washed out. You could tell they just didn’t pop like they used to. Still, it’s amazing that a beer this old can hold up so well. That is brewing prowess.

It would have been nice to put a fresh one next to these older bottles but we weren’t able to find any around town. I think it’s a January release so it’s no surprise there weren’t any left. I’ve had a fresh Old Crustacean before, although it’s been some time. I remember it being very much an American Barleywine – big hops, low on yeast character, and a nice warming sensation. You won’t be disappointed either way – fresh or aged.

If you’re beer tasting are the same old same old this is a good way to spice it up. I wish more breweries would offer this type of package. Who knows how many old bottles they have left so if you’re thinking about doing this vertical, I would jump on it.