After I brewed my Oktoberfest, my mind started wondering to big beers. You know, those beers that look forward to after shoveling the snow in December or January. Those beers that warm your bones as you sip it next to the fire.  After brewing a Belgian Stout a few days prior, I felt the need to brew up a nice Imperial Porter.

Somehow with all the crazy attention Barrel Aged Stouts and Pastry Stouts receive these days, Imperial Porters have pretty much gone to the waste side. This was my effort, however minimal and innocuous, to bring more attention to this wonderful beer style.

One of the biggest challenges for a pro brewer or homebrewer has to be brewing big beers.

For the argument sake, I am classifying ‘big beers” anything with a starting gravity over 1.080. There has to be an easier way.

Reiterated mashing is a process in which you create a wort from your first runnings and then use that wort as your strike water for essentially your second mashing.

My first try at reiterated mashing 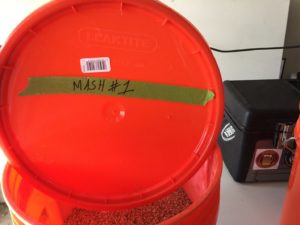 I first started doing reiterated mashing a couple years ago. I attended Hopvine Brewing Co. with my homebrew club for American Homebrewers Association’s Big Brew Day. The generous brewmaster from Hopvine, Ken McMullen, donated up to ten gallons of wort that he had previously run off. The wort was a nice simple Rye Pale Ale that came in at 1.056 Original Gravity(OG)

I decided to add about twelve pounds of grains to the wort and that was the creation of what became known as Fifty Shades of Gorbachev’s Birthmark, my 10.5% ABV Russian Imperial Stout. This beer won an interclub competition and was scaled up on Ken’s system and at Hopvine.

My second try at reiterated mashing 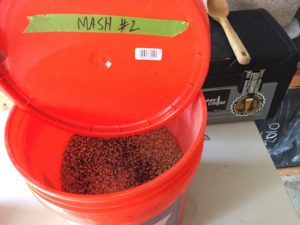 Mash #2 contains the dark malts that transform this otherwise IPA/Pale Ale to an Imperial Porter.

My second time doing a reiterated mash started early in the morning on a particularly warm August Sunday. I was out in my garage by 7 AM ready to start my brew day. I needed to make sure I separated my grains even prior to milling them.

The first mash was essentially a cross between an IPA and a Pale Ale. Since I was only interested in the starting gravity after all of the grain was mashed, I did not bother to take any gravity readings with my refractometer. After the hour passed with the first mash, I quickly squeezed my BIAB and dropped in my second set of grains for Mash #2. I was on my way to finishing this beer. 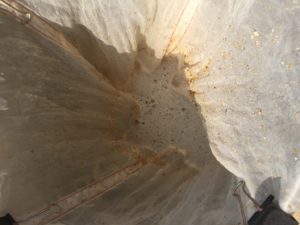 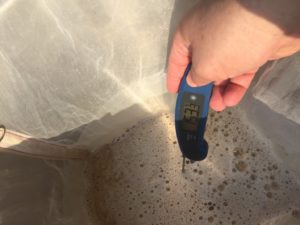 My hop additions were an ounce of Northern Brewer at 60 minutes and Yakima Valley Hops’ Experimental #472. Their hops have been in my freezer waiting for a beer like this. Interesting note on this particular hop; it has notes of citrus fruit such as grapefruit when used with lighter malt, however, the flavor transforms to coconut and whiskey once dark malts are added to the grain bill. White Labs – London Ale WLP013 was my yeast of choice for this brew day. After making a starter the day before, this wort was ready for a healthy pitch. 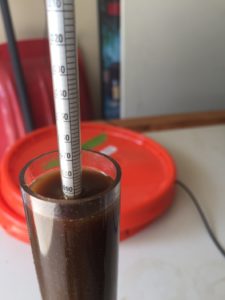 Overall, I was very happy with the process of Reiterated Mashing. Sure I did add an extra hour to my brew day. That was the one drawback, but that was quickly forgotten about when I realized my numbers for my Original Gravity were dead on; 1.092 O.G.

Reiterate Mashing will help any brewer who finds it easy to max out their mash tun or make it impossible to lift their BIAB with twenty-five pounds or more of grain. Even with a hoist set up, you have to still lift the BIAB out of the kettle. Reiterated Mashing makes this process just that much easier. Consider reiterated mashing the next time you craving kicks in for a big beer.