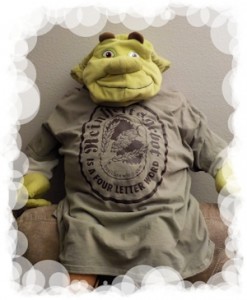 Reinheitsgebot is a four letter word

“Reinheitsgebot is a four letter word”. I think most homebrewers would agree.

The Reinheitsgebot, otherwise known as the German Beer Purity Law, outlaws ingredients other than the basic barley, hops, water, and yeast in beer. This contradicts the fundamental spirit of homebrewing.

We hate being restricted by rules. Generally we want to brew with anything and everything that we can think to add. Sure, we love our barley, hops, water, and yeast, but we also crave the freedom to add our spices or our coffee or our Jalapeños or our maple syrup or apricots or even our bull testicles.

Don’t tell us what to do. We’ll add what we want to our beer. Screw you, Reinheitsgebot.

I wholeheartedly agree with the sentiment on the shirt. Otherwise I would never have paid hard-earned money to the good people at Basic Brewing Radio to purchase it. (shirt available at their online shop if you want one too) ….

Let me utter a word of caution for beginning homebrewers …. just because you can add bull testicles to a beer doesn’t mean that you should right away.

I think one of the biggest mistakes I made as a beginner was adding maple syrup to a beer before I fully understood how to brew with basic ingredients. Honestly, my second batch of beer was one of the worst things I ever tasted. I added too much maple syrup, and it turned out tasting way too much like rubbing alcohol.

To be very honest, I fully believe that even experienced homebrewers should brew mostly with the basics. Sure, add spices here or there. Add your fruit and vegetables and chocolate and coffee and whatever you want, but do so with caution. Trust me, too little of a “strange” ingredient is better than too much. I fully believe that a beer should taste fundamentally like a beer regardless of what non-standard brewing ingredient you add.

Personally, I love most of the great fundamental classic styles of beer. By far, my favorite recipe book (brewing or non-brewing) is Zainasheff’s and Palmer’s Brewing Classic Styles. I don’t follow the recipes word-for-word, but I do pay attention to the ingredients and ratios. I’ll tweak, but I won’t drastically deviate from the spirit of the style. The only competition awards I’ve won were on a German Maibock and a German Altbier, which for the most part followed the Reinheitsgebot. I think I did well brewing these beers, because I love to drink these kinds of beers.

More importantly, these recipes give you a chance to learn how to learn to brew beer before you go off and do anything crazy. 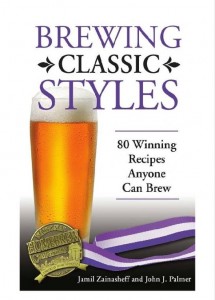 At the same time, though, I do love to experiment. I couldn’t be a homebrewer who didn’t have the right to brew a Popcorn Jalapeño Ale.

But, thank you too, Reinheitsgebot.

What do you think?

I’m wondering … did you (like me) start deviating from the basics too early in your homebrew “career”?

What is the weirdest ingredient you’ve brewed with, and how did it turn out?

Generally speaking, do you tend to brew more of the classic styles … or do you mostly love to experiment with other ingredients?

Leave your comments below …