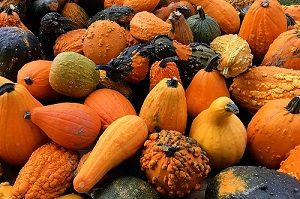 Autumn is upon us. With the coming harvest, crisp mornings, colder nights, and fireside, family get-togethers, comes the time of year to brew one of my favorite seasonal beers: Pumpkin beer!

Pumpkins have been used in American beer recipes as an alternative fermentable source since the colonial days.  When you are deciding what ingredients you’d like to incorporate into your next Pumpkin Brew, it’s important to stick to a few simple basics in getting the style on point.

An Ace of a Base

It’s important to start with choosing your base style of beer.  Many beer styles are adaptable as a base for pumpkin ale.  For example, the roasted nature of porter or stout makes an excellent complement to the spices added to pumpkin ale.

If you’re like me and enjoy the delightful Belgian styles and yeast characteristics,  the esters from the yeast couple with the pumpkin to make a unique and flavorful experience.  Certain yeast styles can bring out notes in the beer of anise, clove and ginger that can compliment the beer spice profile.

My base beer tends to be amber, full of crystal malts and carapils for body, and utilizing Maris Otter and Light Munich as the base. Maris Otter and Light Munich are malts that tend to be slightly darker than other pales, but which have a very satisfying bready and toasty character.  These two have a strong malt backbone to support the pumpkin and spices and lets the orange color shine through.

The purpose of your grain and base selection is to showcase the pumpkin and spices to create a balanced finished profile.

Many people ask if they should use real pumpkin in their beer recipe and I must say that I feel there is no other way!  Although th 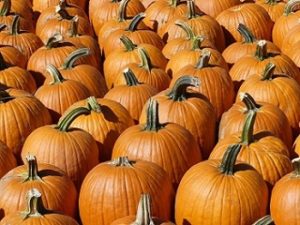 e pumpkin may not add many dominate characteristics to your beer, it will possibly create a smoother mouth feel.

When selecting pumpkins, make sure to use  crookneck pumpkins or Cinderella pumpkins.  The tradition jack-0-lantern pumpkins have very little flesh and low fermentable sugars.  Typically you want to shoot for a pound of pumpkin per gallon.

Canned pumpkin works well for brewing out of growing season or in preparation for an upcoming Autumn/Oktoberfest time.  Just be sure that you are looking for 100% pumpkin and not pie filling loaded with additives that you don’t want in your beer.

You need to prepare the pumpkin a few days in advance of the brew day. Using a large knife, halve the pumpkin, remove the seeds, and cut the halves into pieces about 6 inches (15 cm) long. Cover some cookie sheets with aluminum foil, arrange the pumpkin pieces on the cookie sheets, and sprinkle them liberally with brown sugar.

Roast in the oven at 375°F (190°C) until soft. This usually takes two to three hours. During roasting, the brown sugar will melt and caramelize onto the pumpkin, providing extra flavor. Remove the pumpkin from the oven and let cool. Then peel off the pumpkin skin, dice the flesh into large cubes (being sure to save the juice for its color and flavor), and store in a covered bowl in the fridge.

On brew day, let the pumpkin warm to room temperature and put it in the kettle for the duration of the boil.  You can really add the pumpkin at any time during the boil, typically 5-15 minutes before knockout.  To avoid a mess in the kettle and clogged valves or siphons, put the pumpkin into either a large fine-mesh bag designed for fruit or a hop spider equipped with a paint-straining bag.

Spices can also be added at almost any point during the brew process, but they are usually added at the end of the boil or before bottling to help preserve the flavors and aromatics.  Different recipes call for different spice mixes, but I like to use lots of cinnamon, ginger, and nutmeg, and a touch of fresh vanilla and allspice.  Saigon or Vietnamese cinnamon is an interesting one to use having a strong, rich, and sweet flavor.

Spices can be added directly to the boil with a few minutes left, where you run are unable to flavor exactly to taste. If adding before bottling or kegging, or into a secondary fermenter, it is recommended to make a spice extract with a strong clear alcohol like Vodka or grain liquor.  Typically you let it soak the spices for 2 week and just add small increments of the extract to taste. Remember, you can always add more spice, but you can’t take it out!

Here are links to 3 Great Pumpkin Beer Recipes to get your creative juices flowing: