Let’s stop and take a second to appreciate the wave of great pilsners coming to market.

Not too long ago a tasting of this caliber wouldn’t be possible. We’d have Pilsner Urquell, Bitburger..and..umm…some other others?

We’ve come a long ways. In the picture below you can see a few classic German & Czech pilsners next to a bunch of great craft offerings from the U.S. Are the American breweries outperforming the classics?

We’ll see in a second. First the lineup. 11 beers total: 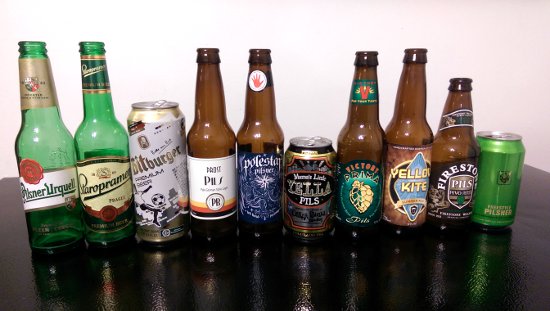 The Pintwell guys and I were really looking forward to this one. In case you’ve missed the articles, we do these blind tastings from time to time, like our IPA blind tasting and Westy 12 blind tasting.

Personally I prefer the more moderate styles though. The IPA tasting in particular left me with a hop-headache after all those monsters. Pilsners are much more tame.

Thoughts going into it

It’s fun to pick a horse beforehand. My money was on these three: Prost Pils, Pivo Pils, and Prima Pils. All beers I’ve thoroughly enjoyed and recommend regularly.

But would the blind tasting show that I actually don’t like these beers as much as I thought?

To be completely honest there were three winners. On any given day any of these 3 could be my favorite. I feel more comfortable saying this because these three were without a doubt the best three in the bunch, and we all agreed on that fact. They are:

If we absolutely had to pick a winner between the three of us it was Polestar because Chris and both had it as a #1. A few of my notes on these:

Seriously, they were on a whole different level. They stood out like a sore thumb. Here’s how the rest of my rankings shook out:

My biggest disappointment was in Prost Pils. I’ve always talked that one up and though it could win the whole thing. 2nd to last!? C’mon, Prost!

It was painfully obviously though, when drank side by side with the top three beers, that it’s just not as good. Our notes said it tasted like a corn tortilla. It would go great with Mexican food.

Pilsner Urquell was a mess. Tons of diacetyl and some DMS. I didn’t note the skunky flavor you’d expect with the green bottle. Of course we don’t know how this beer tasted fresh out of the brewery. It did travel a long ways. Still, it stunk. Same goes for Bitburger (lots of diacetyl in this one).

Blind tastings can really be mind-blowing sometimes, and that’s why I love them.

Are you surprised by the results? Got any pilsners we didn’t taste that you think would have earned a top spot?