One of the most foreign ingredients to get used to when starting to brew for me was yeast; there are so many different types, brands, and small nuances to figure out when it comes to choosing yeast.

One of my favourite homebrew-geek things to do is remaking beers I’ve made before, but switching out the yeast to see how I can get the flavours to change; giving me a better idea of where the flavours that I like (or don’t like) are coming from.

Last October I made a batch of an India Brown Ale with Rogue’s Pacman yeast (Wyeast 1764) and it came out great; nice & hoppy but with some nice roasty malt to back it up. My family came in from Australia for a vacation, so I kegged all 5 gallons, had a party and it was kicked in 24 hours…good feedback!

Pacman is a fairly neutral yeast, with only a hint of fruitiness, which made this brew a little drier than I had hoped for.  So began my search for a yeast that would make this beer a little rounder, but still play up the great hop profile.

While trolling the homebrew forums, I heard whispers of a new guy in the yeast biz; Al Buck at East Coast Yeast. Rumours of him having the original Chico strain were flying (apparently untrue?) and that the Old Newark Ale yeast that was being produced was the Ballantine’s strain from the now defunct brewery in NJ (true!!). Being the advertiser’s dream that I am, I had to try some of their yeast!

I contacted Joe at Princeton Homebrew supply to see if I could get my mitts on some. I was lucky that Al & Nina from ECY were just about to drop off a batch that included the Old Newark Ale (ECY10), Bugfarm V (ECY01) & Saison Brasserie (ECY08). I ordered one of each and eagerly awaited their arrival! 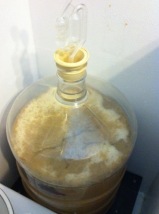 I brewed up a batch of the IBA, and I excitedly pitched the Old Newark into the 1.065 OG wort. It took off like crazy for the first couple of days (at ambient house temp of 76 – a little over the recommended temp, but no space in the kegerator!), thank goodness for blow off rigs! Within 5 days it was burnt out down to 1.020 (6.0% ABV), got about a week of dry hopping with Columbus hops and then it was ready for kegging and a homebrew festival!

I got loads of great feedback on this one from the attendees at the festival (we placed 2nd in the judges vote!), and those that have tasted both versions far prefer the ECY10 version over the Pacman; a much fruitier, yet still dry beer, and the yeast seemed to really showcase the hops beautifully! I loved how this turned out so much, I used it again just last week in my April group brew recipe for the American Wheat – fermenting away at 67 degrees (recommended range is 60-68) and it smells great so far!

I highly recommend checking out East Coast Yeast’s yeasties if you’re in the Princeton NJ area (only being sold at Princeton Homebrew for now – shipping will begin again in the fall). You will thank me 🙂