by Karl S Updated on May 5, 2021 American Beer Brewing Recipes

How’s it going? My name is Martin Keen, and I think I’ve got a fun one today. So I’m going to brew what is essentially the base of an English Porter, but it’s going to have peanut butter and milk chocolate in it as well.

Let’s get this thing mashing. So I’m brewing a full five gallon batch today. I don’t always do that, but this was just too good. An opportunity to pass up, not to do a full batch.

Got my grains here. I’ll talk about what’s in here in a moment, but I am going to be mashing this at 152 Fahrenheit or 67 Celsius. Gosh, it’s been a long time since I’ve had the mash tun full all the way at the top like this.

It’s one I’ve already brewed as part of my Homebrew challenge.

There are three additional ingredients that I’m going to be adding into this to get the peanut butter, the milk, and the chocolate. So while this is mashing, let’s chat about what that is.

So yeah, the base for this recipe is my English Porter recipe, and that is what’s in the mash right now. So this is an original gravity of around 1.051 when everything is in there.

Base malt for this one:

So that’s the Porter part to get the peanut butter part? Well, I got something pretty cool for that.

Now the obvious ingredient would be to put some actual peanut butter into the beer. Trouble is peanut butter is quite oily and oil and water. Don’t really mix.

There are ways that you can reduce the amount of oil in your peanut butter, which I think involves something about tipping from one container to another, over a lot of time, like weeks and weeks. And I’ll eventually kind of dry out, sounded like a lot of work. So I’m using something else.

PB2, this is powdered peanut butter. And I have two pounds of that. This because it’s powdered, it isn’t so oily. So it should mix better in with the beer. You can put this in at various points. I’ve seen people put it in at the mash, in the boil, even in the fermentor, I’m going to be electing to put this into the end of my boil.

Testing testing one, two. Now the last ingredient that’s fermentable in this beer is this. This is lactose. This is milk sugar. And unlike a lot of sugars, this is not something that’s going to be consumed by the yeast. So it will still be present in the, in the finished beer. So that’s going to give a little bit of sweetness to the beer and a creamy mouth feel, which is what I’m looking for.

The last missing piece of the puzzle, cocoa nibs. These are dried seeds from the cocoa plant and they really add, well, just a delicious chocolaty flavor to any beer and they smell absolutely delicious.

The wort to a boil now,… So let’s talk about what’s going in the boil and when. My main bittering hop is EKG East Kent Golding. This will go in at 60 minutes into the boil. I’m also going to add EKG in with 10 minutes to go as a flavor hop addition.

Yeah. East Kent Golding can go on and give you sort of lemon, herb citrusy kind of flavors, quite subtle and is to be quite a busy 10 minutes. Cause that’s also when I’m going to be adding in like two pounds of PB2 and my one pound of lactose

So I’ve taken a gravity reading and my original gravity, I was looking for 1.052 actually about 1.060. Um, the reason for that I think is the PB 2.

I wasn’t really sure how to account for that in my brewing software, beersmith. So I didn’t have it affect the gravity at all the calculations. And I guess it has a, um, a few points and there is sugar in there. So I am expecting that to fermented out and contribute to the alcohol of this beer.

The other thing that’s going to contribute to the alcohol of this beer is the yeast itself. I am using London Ale. This is wYeast 1028. Now you may have noticed that I’m not using my usual spike brewing fermenters. They are both full with other beers.

So I am now using my fermzilla all rounder and something different about this all arounder from when I’ve used it before. And that is, I am modifying it to hook it up to my glycol chiller. 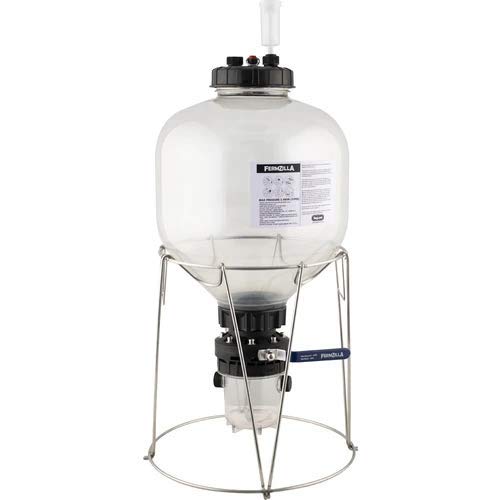 For brewers that want all the advantages of a conical fermenter without the price tag of a stainless steel unit. Allows you to dump trub, harvest yeast, carbonate, and serve – all in one vessel!

So Kegland provides something called a temp twister that allows you to flow glycol into your firmzilla. You just have to modify the cap here to allow the input and the output, and then also add in a thermal well as well. So it’s just a case of drilling a couple of holes. It was pretty straightforward.

So I’ll now be able to send glycol in and out of here and regulate the temperature. And I do have one more little bag of tricks as well to maintain the temperature in this and that is this insulated jacket.

This is new for the firmzilla and this just slides over the top. I’ll get the this in place. Before I put this on.

The last thing that I still need to add, or the cocoa nibs, I’m going to add these in just as fermentation is dying down. So I’ll keep an eye on that when the fermentation is about complete I’ll add those four ounces of cocoa nibs in.

So brew day is complete, and I can’t wait to give this one a try.

Where’s the peanut butter? All right, great. Good. I’ve got you covered here too got a peanut butter cup, so that’s perfect. So let’s take a look at the appearance.

First of all, are you on looks well, a little lighter, a little lighter, but yeah, this has got a nice dark color. It’s not really black. It’s a dark Brown. It’s a good head though. A good head. A good head of milk. I know. What about the smell? So I’m definitely picking up the cacoa nips and a little bit with the peanut smell as well. What about, uh, what about your milk? Oh, I got the same thing. Yeah. Whatever he said. Yes, absolutely. Let’s give it a try.

Yeah. Well, it’s still going. It’s still good folks. You know, what I’m getting from this is, you know, do I get the milk and the chocolate I’m getting the lactose tastes definitely, definitely. You get that sort of Milky mouthfeel and the cacoa really coming through with chocolate.

But actually it’s quite well balanced because you do have peanuts. Um, you do have that Milky taste and you definitely have the chocolate as well. It’s really quite delicious without being sickly sweet. Well, I’m pretty pleased actually with how this turned out. It’s a bit of a shot in the dark combining all of these ingredients together, but it’s ended up being quite well balanced in that all of the three flavors that we’re looking for really are incorporated in there.

Well, with that said, we’ve got to do the most important thing now, the cheers. So thank you for watching. And Cheers!

What a pro you took the sip as well. Some people cheers and then put the drink down, professional at work.