Imperial Stouts. Eight per cent IPAs. Kick-ass barleywines. We love our high-octane beers, and since we’re in control of the recipes and the process, we can tailor them to our liking.

But summer is coming. Do you want to serve such a potent beer to your guests at your cookouts? Is that what you want quenching your thirst after mowing the lawn during the Dog Days? What about when you settle in on Sunday afternoon to watch a little baseball?

Big beers are great, but some circumstances just don’t warrant all that alcohol. Warm weather activities call for crisp, refreshing session beers that quench your thirst, wet your whistle, and don’t go straight to your head. And with Memorial Day right around the corner, now’s the time to begin brewing low ABV summertime ales.

Turn out the “Lites”

I know what you’re thinking. Take a good beer, water it down, and voila! You’ve got a low alcohol light beer! The macros have been handing us that moldy old rubber peach for decades, and it ain’t gonna fly.

But that’s not what I mean at all. This isn’t about Sex In A Canoe beer. I’m talking low ABV styles that were designed from the start to taste good and not put you three sheets to the wind after a couple of pints. Consider these styles:

These styles (and more) can be brought in under five per cent; some are meant to be under four per cent. And for you hopheads, session IPAs can be made at five per cent or so without sacrificing flavor or the bitterness you crave. You can make these beers as tasty and as diverse as you wish.

The BJCP Style Guidelines are chock-full of traditional smaller session beers. It’s a good place to begin your research. It’s also wise to keep in mind that such styles as Bitters, Scottish Lights, and Kölsches are standard fare in pubs and biergartens, where the point is socializing with a drink in your hand, rather than drinking with your buddies at hand.

The Search for Sunbonnet

A couple of years ago, I was drinking a commercially brewed shandy. It was light and had a nice lemon tang to it. It made me think that I wanted to brew something similar, so I did some research. I was feeling stymied, though. A traditional shandy is made by adding a soft drink, such as carbonated lemonade or ginger ale to beer.

So even though they had managed to package a pre-mixed shandy, I was pretty sure my humble facilities weren’t up to the challenge. And I couldn’t be bothered with mixing after the fact. I wanted that flavor straight from the bottle.

I considered adding frozen lemonade at some point in the process, most likely after primary fermentation was done. The thing is, they’re likely to have sugars and stabilizers that wouldn’t play nice with my beer. And where was the threshold between just right and too much? Lemon juice on its own might be too acidic, and I didn’t want to chance it.

Eventually I realized that what I wanted wasn’t a clone of that shandy. I just wanted a nice, light beer with a refreshing lemon flavor. I formulated a basic wheat beer recipe, and I decided to add fresh lemon zest. After all, fresher is better. Well, the K.I.S.S. approach worked perfectly. The result was Sunbonnet Lemon Wheat, one of my summertime standards.

It’s refreshing, balanced, pairs well with a lot of picnic and cookout foods, and it’s a terrific stand-alone beer, too.

There are different approaches to zesting citrus fruit. Some people carefully peel away the rind with a knife, producing something more suitable for twisting into a gin and tonic. I find this too time-consuming, and not particularly efficient in getting the best out of the zest. Some use an actual bartending tool which achieves the same result with less risk of cutting one’s fingers. Again, this doesn’t really get the most out of the zest.

I prefer the old-fashioned, boxy-looking metal cheese grater, believe it or not. You’ll get finer particles of zest, and more surface area translates to more flavor. You’ll also greatly reduce the risk of accidentally getting any of the white, underlying pith, which is so bitter in a nasty way that just a little can ruin an otherwise good beverage. 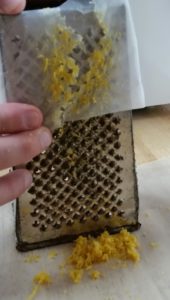 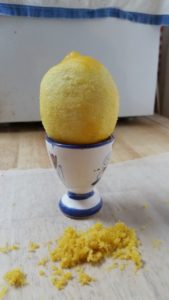 Oh, I know the objections, particularly the frustration of all that zest getting stuck between the holes. You have a real chore scraping it out to use it, and then the difficulty in cleaning up afterwards. But I’ve hit upon a simple and inexpensive method of zesting citrus (and other additions, such as ginger, for instance). Simply wrapping a piece of waxed paper around the grater and grating through it gives you greater control, more zest, and less mess.

As new homebrewers, many of us (myself included) wanted to know how to increase the ABV. After all, we were in charge, so why not really go for broke? The answer I liked best from the more experienced brewers was, “Aim for flavor and the ABV will follow.” Sort of like my dad’s advice to his Little Leaguers. Every kid wanted to be Mantle, or Mays, or Aaron. They’d be swinging out of their shoes, but Dad would tell them, “Swing for the singles and the home runs will come.”

Just as base hits can win ball games, small beers can be the summer’s hero. Oh, I still intend to brew bigger beers, even for summer consumption. After all, a big rye IPA really hits the spot sometimes. Just not all the time. For those times, keep it light and keep it flavorful.