Arachnophobes need not fear: I might have found a spider you could get along with. 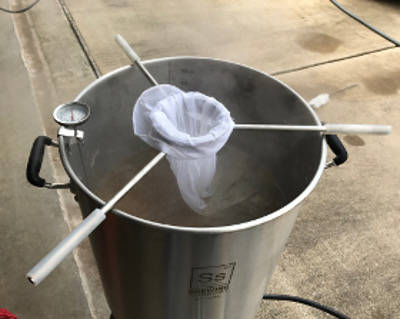 This is a kettle spider which promises to filter the hops in your boil kettle.

In a world of computerized, automatic brewing, this little gadget — at first look — might not appear very impressive.
However, after just a few brews, I won’t be going back to my old way.

The list of methods and equipment that can be used to get the “spice of beer” into your wort is a long one.

A lot of people overlook how they are adding hops to the boil.

For a long time, I assumed hops just had to be in the boil for a certain amount of time and that was that.

And though this is true, if you stop and ask yourself what you are trying to accomplish with hops and what they are doing during the boil, then a gadget like this makes a lot of sense. 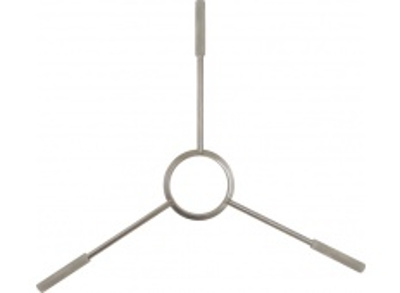 When the box arrived the Postal Service had done a number. There were huge gashes and pieces of cardboard missing and I was actually surprised to see anything in the box.

The design is quite simple: a 3.75 inch ring that has three 10 inch legs which span out to hold it in the middle of your kettle. The ring has a lip which allows you to use a drawstring, o-ring, tri-clamp, or simple rubber band to hold a bag in place during your boil.

The spider itself is held in place by silicone sleeves on the end of each leg.

The spider is made of 304 stainless steel. I didn’t try it, but I think this thing could be run over by a truck and still look amazing. 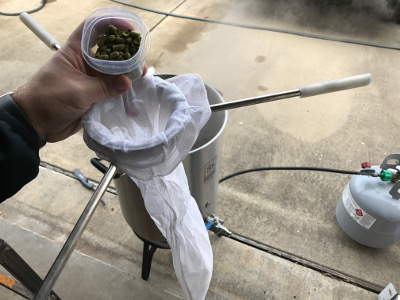 Included a 6” x 14” bag (this was for the review, it does not come with a bag) which is for an eight gallon brew kettle.

However, since I was brewing on 15 gallon kettles and only brewing five gallon batches (during testing) this bag would not work for me (the liquid level was not high enough).

I had a fine mesh bag left over from my partial-mash brewing days and that is what I used.

The bag was much better since it had a drawstring, but I made due with a rubber-band.

When it was time for my first hop additions, I placed the spider and bag into the center of my kettle and added the hops as the recipe called for.

The ring keeps the bag open during the entire boil which makes it easy to add more hops when it is time. This was nice over the socks because you only need the one bag.

When it was time to remove the hops from the boil I simply lifted the spider, allowed the entrapped wort to drain and laid it aside to finish the brew.

Cleaning was simple I just scrubbed it with all of my other stainless. The bag was a bit of a pain but always came clean, a little greener, but clean.

Thoughts after using the Hop Spider

As I stated in the intro, I love this thing. I cannot see myself having a brewday without it.

I really feel that I got much better alpha extraction from the hops because they were allowed to be “free” as compared to the socks I have always used in the past.

Plus, I like that the spider keeps your hops in the center of the kettle.

The two brews that I have used this on have actually turned out better and there is a noticeable difference in the beer.

At its price, this item is most definitely worth it and I cannot think of a reason not to get one.

Finally, this is a better alternative than the DIY hop spiders you see out there made of PVC. The PVC is known to melt and I don’t know about you, but I don’t want the moisture that accumulates on the PVC dripping back into my beer.

[Billy B’s note: Yep, I agree with Alex here. I wrote a DIY hop filter post years ago where I recommend using PVC. I no longer recommend it. If you can find a stainless steel ring to use, awesome. If not, go ahead and buy one of these spiders. Or just buy one anyways and save yourself the DIY.]

There are many ways to get hops into your beer, this is just one, but it will be the way I do it from now on.