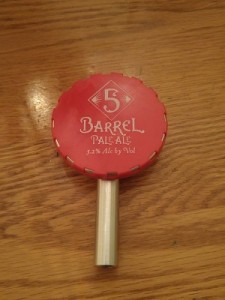 My wife is always asking me, “What’s on tap?”

As a homebrewer who kegs most of his beer, I usually have between 2 and 4 kegs at least partially full of beer at any one time.

My keggerator, however, only has two handles, and I don’t always tell my wife when I switch one of the beers.

Therefore, she has to ask. If I’m not around to ask, she will sometimes pour a beer that she regrets having to drink. She and I have very different pallets, and believe-it-or-not some beers are too hoppy or too roasty for her liking.

I married a weird one, I know.

And, I know it is a first-world problem, but I’ve been wanting an easy solution.

I’ve seen tap handles that were white-boards. I’ve seen chalk-board tap handles. Those are not real inexpensive, and to be honest, those just seem that they would smear too easily. I feel after a few erases they wouldn’t look that great.

For awhile, I simply put stick-it notes on the keggerator. Again, not really that nice looking.

Just before the end of the year, the fearless Homebrew Academy Leader forwarded me a link to the website of Keg Cap Tap, LLC. Bookmark the link … www.kegcaptap.com … and thank me later.

The idea blew me away. To me, the most genius ideas are those which you see and immediately think, “Duh! I could have come up with that!” That was my immediate thought when I saw the Keg Cap Tap.

Of course, I didn’t come up with the idea. Matt Ferris, owner of Keg Cap Tap, came up with it. 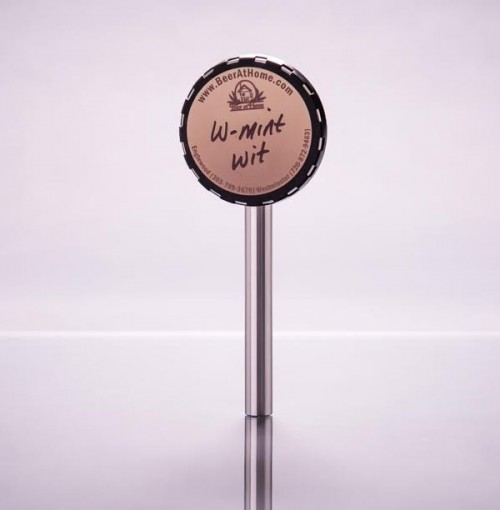 Apparently, Matt and his lovely wife had similar issues with their keggerator that my lovely wife and I have. “What’s on tap?”

Instead of living with the problem, Matt took matters into his own hands and invented a tap handle that was machined in a way to easily accept one of those round plastic caps that come on the neck of sankey-style commercial kegs. Since those are branded with the beer name, just pop it off the keg and pop it on the handle.

If you have troubles picturing what I am talking about … check out this 34 second youtube video: https://www.youtube.com/watch?v=NWr5CUlbkC8

Now, this works fantastic if you buy lots of commercial kegs. What about those of us who mostly only keg our own beer? 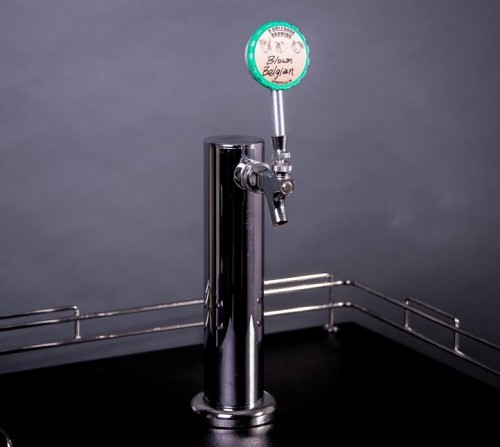 Keg Cap Tap has an answer for that.

They will sell you inexpensive blank caps to put on your tap handle. Or, they also sell the caps with a wood-grain sticker on them. Simply write your beer name in permanent marker, pop the cap on the handle.

And … even cooler … you can submit your own artwork and they will print up a bunch of customized caps. Leave enough space to write a beer name. Not only do you know “What’s on tap”, but there is a cool-factor of having your own artwork on a customized handle.

I contacted Matt, and he was kind enough to send me one of his tap handles along with a handful of blank caps and caps with the “wood grain” stickers on them. 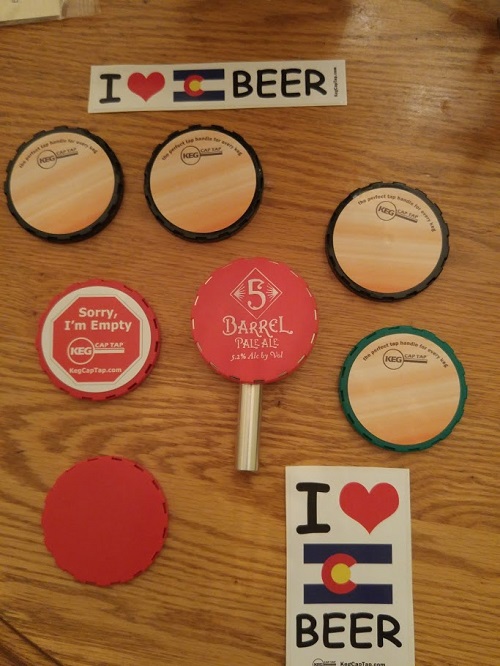 I’m not going to lie. I was pretty much sold on the product before he sent those over, but obviously, the quality of the tap handle is important.

As promised, it fit my standard 3/8″-16 UNC threaded faucets. It was very easy to screw on and off.  It is precision machined from high quality 6061-T6 billet aluminum, and very nice looking.

Note: if you have metric (10×1.5mm) faucets, Keg Cap Tap has adapters available.

All the caps pop on and off the handle easily and fit securely. Matt was even nice enough to send me a cap from a keg of Odell Brewing Company’s 5-Barrel Pale Ale. It fits just as well.

It is also available in a couple of colors, the original silver that I got, and a nice looking black.

I haven’t submit artwork for my own custom caps (yet), but I did print out a little “label” to stick onto the front of one of the caps. My in-laws got a kick out of seeing themselves on one of my taps. 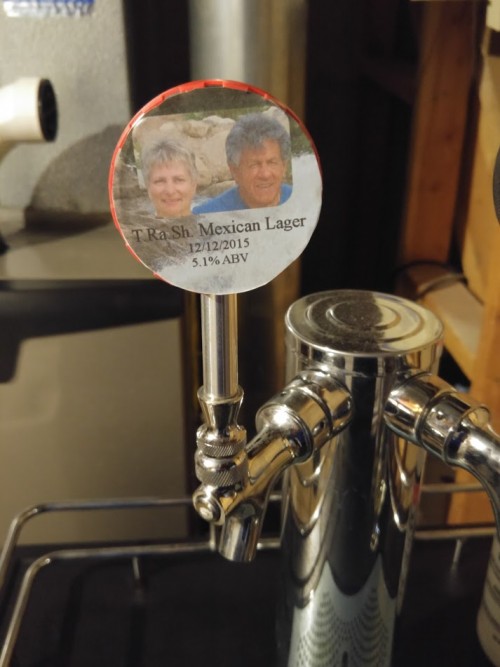 For what it is worth, Matt tells me that he and his wife use the hell out of their product. They have a two tap kegerator that is a converted refrigerator. Freezer on top and kegerator below.  They typically have two kegs on tap and have all kinds of ways they label the two taps. An example he gave me was that for parties they have a “his” and “hers” handles. I’m not sure what happens when “he” steals some of “her” beer.

They take much pride in making all of their products in Colorado. Obviously, they could make them far cheaper overseas but absolutely refuse to do so.

Matt also asked me to let you readers know that he is open to just about anything. “If a customer has an idea for a handle or something else, we will work with them to make it happen.”

And … yes … I love this product. I am going to order myself another one for my other tap. I also expect to submit some of my homebrewery artwork for custom caps at some point. My wife will no longer need to ever ask “What’s on tap?”

Go ahead and check these guys out at www.kegcaptap.com or their facebook page at www.facebook.com/KegCapTap. Matt was very responsive to my questions. Feel free to email (info@kegcaptap.com) or call (303-335-0739) the company if you have questions.

Or … better yet … leave comments / questions below so that others can see the answers. I’m sure Matt will be by to answer any questions you have.

By the way … if you want to be able to use the occasional Sanke-style Keg in your ball-lock keggerator … see Billy’s awesome post “Convert a Sanke Keg to Ball Lock“.

So, what do you think? Are you impressed by this idea as I am? Do you have questions or comments? How do you let people know “what’s on tap”?

*A sample of this product was provided for review purposes