It’s July and time for our third installment of the Homebrew Academy Group Brew.

Unlike the previous group brews, , American Wheat and English India Pale Ale, a fruit beer is a wide open category and really up to the brewer. Based on the BJCP 2008 style guidelines “The fruit should complement the original style and not overwhelm it. The brewer should recognize that some combinations of base beer styles and fruits work well together while others do not make for harmonious combinations”.

If you’re new to the Group Brews, it is where we pick a beer style for the month and any homebrewer who wants to participate brews their own variation. You post your recipe in the comments of the post, and then return to the post and comment on how your beer turned out. Be sure to have fun with it.

Some commercial examples of fruit beers that you may have tried: 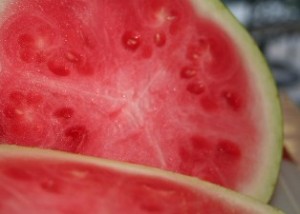 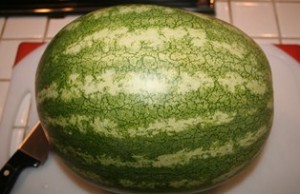 For my beer, I have chosen to brew a Watermelon Wheat. I have only tried one watermelon beer and that was Hell or High Watermelon from 21St. Amendment and to be honest, I don’t event remember what it tasted like. None the less, this idea sounds like a fun summer beer to brew.

7.5 Lbs that will be cut into chunks and frozen (no rind).  The watermelon will be thawed and added at about day 3 or 4 during fermentation.

Since this is a totally new recipe for me, I may dry hop after fermentation is complete. This will be a “Game-Day” decision depending on the taste and aroma.

For the basis of this group brew, you should shoot to get the beer in your glass in about 6 weeks, fruit beers make great summer brews.

Bring on the fruit!