I grew up in a big family. I have three brothers and one sister (so, naturally, she outnumbered us), and I’m the fourth of five children. Thus, I have some experience being both a little brother and a big brother. One thing younger brothers do is compete with their older brothers. It’s not always a rivalry; it’s just a way to be your own person.

For instance, my oldest brother plays the guitar. And so does my younger brother. But Alan’s style was influenced by The Beach Boys and James Taylor. Ed’s style mirrors Van Halen and Led Zeppelin. Still, when they play at family reunions, they can riff on some 8-bar blues together and blend perfectly. 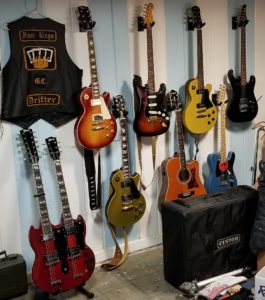 Just some (not all) of Ed’s guitars

Now you may be wondering what this has to do with one of today’s most popular ale styles. Here’s where I’m going with this:

IPAs originated in Great Britain, but England’s bratty kid brother (the good old U. S. of A.) has taken the style and made it their own. Over the past 40 years, we’ve taken a centuries-old style and told our big brother, “Anything you can do, I can do better.” Or, at least, we can put our own unique spin on it.

The style known as IPA started out as India Pale Ale. In the late 1700s and early 1800s, it was brewed as a pale ale to be shipped to India. Not only did it give officers and soldiers stationed in the Orient a little taste of home, but it gave Rudyard Kipling something else to write about. This beer was more highly hopped than other English ale styles, most likely to help preserve it on the long voyage around the Cape of Good Hope at Africa’s southern tip. 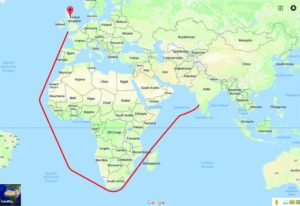 And you thought it was a long way to Tipperary!

Although it used more hops, they were classic British hops, which are mild, with Alpha Acid percentages between 5% and 9%, and notes more often associated with flowers, spices/pepper, or orange/citrus.

The traditional style faded in popularity during the early part of the 20th Century, possibly because British colonialism in India was fading in popularity. It was revived and slightly altered by the American-led craft beer revolution of the 1980s.

Yes, the bratty kid brother shook things up quite a bit when craft beers took off.

Independent breweries set the style on its ear by utilizing New World hops, specifically the strains developed and grown in the Pacific Northwest. These so-called C hops (Citra, Cascade, Centennial, Columbus), as well as other strains, are sometimes twice as high in Alpha Acid percentage than their English counterparts. They feature a wider, more aggressive bittering/flavor range. In addition to including pine/resin and earthy/musty, they expanded the fruit flavors by including tropical fruit and melon. 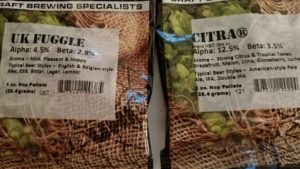 See, even the BJCP understands the dynamics of being the little brother. You have to have an attitude if you’re going to make yourself stand out compared to your big brother.

That’s not to say that we Yanks weren’t aware of our big brother’s trailblazing. Maybe your brother taught you how to throw, but you developed a nastier curve than he ever had. In much the same way, America was born on the cusp of the Industrial Revolution. These New World brewers had the advantage of developing their beer styles along with mechanical breakthroughs and hybridization that the British brewing tradition lacked. American brewers had the best of both worlds, and even now we continue to look to the traditions and styles of Great Britain for some guidance.

You know how sometimes an older brother lets his younger brother help out changing the oil in his car and it turns the kid into a total gear-head? Like, in just five years, he’s building hot rods from junkyard parts? That’s what I think of with American IPAs. The derivatives of the American version are many and varied: Belgian, Black, Brown, Rye, New England, Red, and White (but oddly not Red, White, and Blue. Give it some time, though), and the Double IPA, some featuring IBUs of over 100. 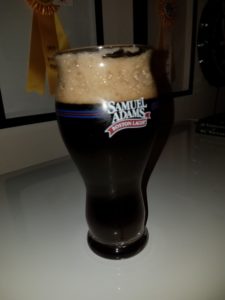 My own black IPA

There are even IPLs – highly hopped lagers that combine the smoothness of cold-brewed beer with the punch in the face of the Northwestern hops.

So the English were content with their style for over two centuries, but in only one-fifth of that time, the American craft brewers concocted not only their own stylistically distinct IPA, but came up with no fewer than nine variations. In fairness, many of them were the result of using a different yeast strain or borrowing ingredients from another classic style and hopping them up. But the point is, little brothers often feel the need to create their own unique fashion look from hand-me-downs.

I’m not saying one style is better than the other or even needs to be. Just as parents don’t have a favorite child (they don’t, right? Right?), the original British India Pale Ale and the many variations of American IPA are all valid and special in their own way. And they can all get along and play nice (unless the little twerp grabs the red car first, because the red car is mine!).

Trust me, having brothers and being a brother is great. Sure, it means taking some lumps, and giving some, too, because brothers have to squabble, tease, and taunt. But it also means that someone’s always got your back. Hey, I can poke my brothers, but let anyone else try it, and they’ll have to answer to me. And no one knows better than I do that sharing a beer with your brother is one of life’s special moments.