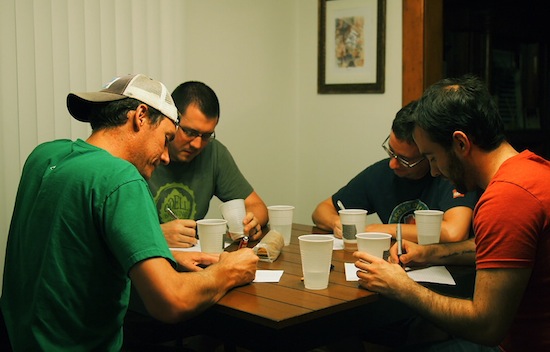 A blind tasting is the great equalizer.

Take away the hype, the label, the expectations, and you’re left with what matters most – the flavor. IPAs are perhaps the most hyped beers due to the popularity of the style and America’s “hop mania”.

To find out what is really the best tasting IPA, I hosted a blind tasting with three other people last week. There was myself, Chris & Jeremy of Pintwell.com, and Sean (@beertographer). Chris and Jeremy are fellow BJCP judges. Sean is a homebrewer who is starting his own brewery and has a ton of tasting experience.

Here are the beers we tried. Our focus was on double IPAs because those are the ones that are most often talked about (e.g. Pliny, Heady Topper) although we tossed a couple standard IPAs in there as well:

We conducted the tasting without having any idea of what beer we were drinking. This was quite a challenge because we didn’t have an extra person to conduct the tasting, but our beer-soaked brains managed to figure it out. We didn’t judge the beers to any sort of style guidelines. It was simply based on how much we liked the beer. We also refrained from talking about the beers while tasting to reduce bias. 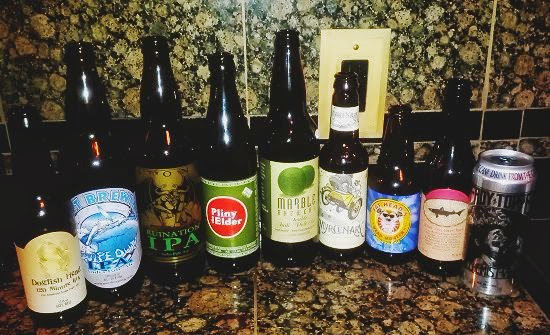 The moment you’ve all been waiting for, the winners!

Myrcenary won it! Are you shocked? Not shocked?

Personally this was my favorite IPA going into the competition and I was happy to see that it came out on top (It was first for me as well as overall). My notes recorded a “bright, fresh, lemony-citrus hop character and great balance.” The balance and depth of flavor is what really won it for me. Many of the other beers had a harsh bitterness and just pounded you with hops. Myrcenary seemed better crafted.

My personal second favorite beer was Wipeout and third was Heady Topper. They are both excellent as well and it was very close between the three.

You’re probably wondering where Pliny is on the list. Me too! I was surprised that I rated it near the bottom. To show that the sentiment wasn’t universally shared, however, Jeremy rated Pliny as his favorite. Such is the subjective nature of beer drinking.

We didn’t rank beyond the top three spots, but they were all pretty close. There were really no losers in the bunch. The 120 minute is not a bad beer but it stuck out like a sore thumb because it’s much more like an American Barleywine than an IPA.

The tasting was an enlightening experience and I suggest you try it sometime. I’d certainly like to do it again with another beer style, perhaps Russian Imperial Stouts.

What did you think of our results? Were you surprised?