Why You Should Seriously Consider Induction Brewing 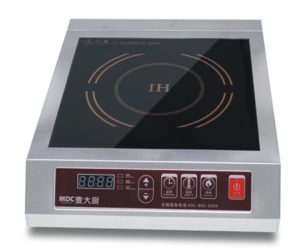 From talking to other homebrewers, I sense many of us went through the same and somewhat predictable progression when it came to getting our wort to a boil.

Most of us started out on our kitchen stoves and realized bringing 3.5 gallons (or more!) of wort to a boil was a lengthy task. We quickly learned that we needed more power.

In fact, I was ordering my Bayou propane burner within hours of pitching yeast into my first batch! But firing up a burner indoors is consider “dangerous.” Oh, bother….

After we toughed-out a few batches with the propane burner, battling the extremes mother nature threw at us, we started to wonder how we could get back in the house to make our beer. These thoughts lead us into the realm of electric brewing.

Electric brewing used to be a rather scary idea. Fearful of the unknown, homebrewers would assume liquid and electricity are bound to result in electrocution.  Or an even worse assumption, high-voltage heating elements will scorch the wort! A few pioneers emerged and theelectricbrewery.com was formed to enlighten all homebrewers on the benefits and how-to’s of brewing with electricity. Some of us who are less electrically inclined, were still left out in the cold, literally and figuratively.

But thankfully there was some new technology emerging to solve our dilemma – induction cooktops.

Induction cooktops generate eddy currents which react with ferromagnetic (iron) in the cooking vessel. This reaction directly heats up the cooking vessel. By design, induction heating is a more efficient transfer of electricity to heat compared to a typical heating coil in a stove or hotplate.

Induction cuts out the ‘middle man.’  The downside is that your brewing vessel must be ferromagnetic, or contain iron, and have a flat bottom.  An easy way to test for this is to see if a magnet will stick to your brewpot.  If it does then you are good to go.

Initially the problem with induction technology was that it was very expensive and cost prohibitive for brewing. Many induction cooktops powerful enough to heat up 6-11 gallons of wort cost hundreds, if not thousands of dollars. These high energy units were only marketed and used by restaurants.

That was until recently, when a new model came on the market significantly cheaper than the others.  Enter the Mai Cook Stainless Steel 3500W Electric Induction Cooktop.

This unit runs off of a 20 amp 240 volt circuit and with patience and some brewpot insulation, is capable of brewing 10-gallon batches.  If you only brew five gallons at a time, you have more than enough power with this unit.

So now that you are aware of what an induction burner is, and how it might be useful in your brewery, you want to know how well it works, right?  Here is how long it takes for me to heat things up:

This is pretty good considering I start to heat while I am sparging, so much of this time is occurring while collect wort into the kettle anyways.  I also measure these numbers without any insulation on my brewpot, which can be really useful, especially when boiling 11+ gallons.

So if you are looking for a relatively economical way to get back to brewing indoors, induction brewing on an electric cooktop may be the route for you!

Brett is a passionate and award-winning homebrewer as well as a Certified BJCP Judge. He loves to talk about beer and DIY projects. You can find him sharing his knowledge through his personal blog and online internet forums. He lives in a Maryland suburb outside of Washington, D.C.