We finally made our first lager! That means we are in pretty deep now…

In typical Katie and Jon fashion, we couldn’t do anything too normal for our first lager. Our goal was to take a doppelbock and add the bitterness of a double IPA. A combo beer if you will, a hoppy dopplebock (because why would we just make a normal dopplebock??).

A traditional base with more modern take on the hops.

We started with some preliminary research (Google). We based our malt bill off of traditional dopplebock recipes we found and also personal preference.

Our hop profile was based off the hops we had available in our fridge that fit with our goals, aka leftovers.

So here are our ingredients and why we chose them:

A big excitement for us was trying our first decoction mash. I’ve been dreaming about it since I was a little girl!

I have judged the Dark European Lager category before in local competitions and I know the one thing I wanted from all the samples I tried was more body! So we really wanted to knock it out of the park in that area.

Decoction mashes are traditional in a great deal of German brewing. For those who have not heard of the process before here is a quick breakdown:

This process achieved two goals; it raised the temperature of the mash creating a step mash activating different enzymes along the way, and it created malt complexity because of Maillard reactions and deactivating enzymes, leaving more complex sugars in the finished wort.

We also employed first wort hopping for this beer. Definitely an old process that is coming into use again. It is meant to add a smoother bitterness, keeping the IBU’s high but reducing the biting feel.

Here is how it works:

We used half an ounce of our Pekko during our transfer for this purpose.

Our goal here was to create a smooth bitterness. We wanted the IBU’s but not for them to overpower our complex malt profile.

All of this temperature control is slightly new to us. We have been using our kegerator for ale fermentation. But lagering is a much bigger challenge.

We pitched at and fermented for fourteen days at 55°F. We had really good luck with the water coming out of our faucet for chilling, (we brewed in September) it was nice and cold!

We did a diacetyl rest for three days after initial fermentation by raising the temperature gradually to 62°F. (It is the worst off flavor to me and I was determined to not pick any up).

After all that, we dropped down slowly to 34°F for it to hang out for a long while. Aka lager.

We transferred to a keg about a month after the brew day and continued to hold it lagering. We taste tested it at this point Hot damn it was hot. Those alcohols needed some time to mellow out. 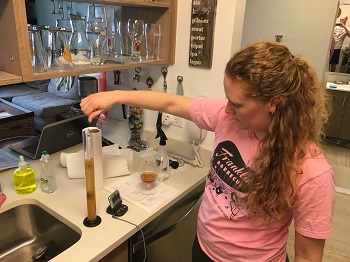 Another process we added to our already complex beer was dry hopping. We dry hopped initially with Pekko at the end of fermentation (in the carboy) then for seven days in the keg with Bravo about four months in. (Remember we were going for double IPA like hop character.)

This beer was entered into a local competition. We put it in the hybrid beer category.

It did not do so well…

The judges did not enjoy the combination of styles.

A few of the critiques we received:

We also sampled this beer at multiple homebrew club meetings and it was really enjoyed there. If we didn’t tell our friends it was meant to be both a doppelbock and an IPA they really enjoyed the beer, most noting it was a bit too bitter to be a dopplebock.

Here are our own flavor assessments, we sampled separately without comparing notes. We attempted to be as unbiased as possible, but we did know this beer pretty well by the time we sat down and wrote these out.

Medium body, some alcohol warmth, some creaminess, no astringency

Fairly good doppelbock character with a touch of sweetness and higher hops than expected for style (duh).  Floral, minty, piney hops are a bit beyond what works great with style but tasty nonetheless

Dark fruit, prune. Toasted crust. Cherry and a touch of caramel as it warms.

Prune and bread crust. A touch of toast

Drinkable but not 100% to style. More dopplebock then IPA, strong bitterness cuts what would be cloyingly sweet style. I love it!

I am very proud of this beer. It is an awesome dopplebock that has a complex malt profile from both our malt choices and our decoction mash.

It is not IPA-y enough for it to really stand out as two separate styles in one. And it is too bitter to be a true dopplebock.

But hey! I don’t always love an overly sweet beer. I can usually only drink one before palate fatigue kicks in and I end up ordering a pilsner or session IPA next.

I feel like what we did with this beer was make a slightly more balanced version of a dopplebock. Not traditional by any means, but do I want to go in for a second? Hell yes!
Here is the full recipe if you want to give it a try!