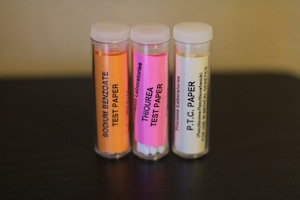 It was an ironic situation.

Our BJCP study group was holding one of its bi-weekly meetings. Studying for the exam means refining your tasting abilities. Ideally, you and the other judges are in agreement on what you smell and taste in a beer. The first thing you do after a round of scoring is compare your score to that of your cohorts and hope you’re not too far off.

Yet this particular night, we were about to prove that no matter how hard we studied, mother nature has ensured that we’ll never taste things exactly the same.

Your own pair of genes

Possession of TAS2R38, aka the PTC gene, codes for a bitter taste receptor on the tongue. In beer-drinker language, if you have the tasting form of this gene then you can taste the chemical known as PTC, which tastes bitter.

You can determine whether or not you have the gene by using PTC paper. Depending on the person, the paper is revoltingly bitter, slightly bitter, or tasteless.

I remember doing this experiment in high school biology class. I remember it because the paper was so disgusting. Curious to try again (and possibly torture my friends), I picked up some test strips for my BJCP study group.

Four of us chewed on the paper. Here’s how it turned out: 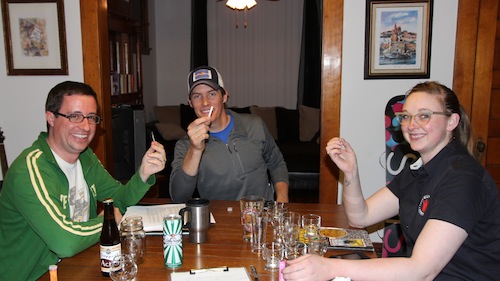 PTC party! A bunch of geeks, with the biggest one behind the camera.

Pretty interesting. Bess and I were ready to vomit while Chris and Jeremy had no reaction.

But I wasn’t done with my bag of tricks.

I also picked up some thiourea test strips, which are similar to PTC. The interesting thing about this test was that while it was still bitter for Bess and I, Jeremy and Chris found it bitter as well.

Finally we tried the weirdest one, sodium benzoate, which is commonly used as a food preservative. Reactions were all over the place. I found it mostly tasteless but slightly sweet, Bess found it moderately sweet, Jeremy found it salty, and Chris got the distinct essence of hot tub. Go figure.

Something doesn’t add up

Here’s what I find most puzzling about this whole thing. Scientist claim that this is natural selection at work – that if you can taste PTC, then you will avoid potentially toxic plants that taste bitter. In modern-day, PTC-tasters supposedly avoid bitter foods. Here’s a quote I found:

Supertasters will not consume any bitter foods, like dark-green leafy vegetables, coffee or chocolate..

First of all I don’t consider myself a supertaster, but the PTC paper was fucking gross. Seriously.

So why do I love all of those foods and of course, IPAs? Honestly I don’t know. The one thing I can say is that although they’re all bitter, the paper didn’t have one iota of the pleasure as those other foods. I won’t be packing paper strips as a snack any time soon.

Maybe you can acquire the taste for bitterness after all. Maybe the one thing stronger than evolution is India Pale Ale. I’ll buy that.