How To Brew Garlic Beer

Transcript: My name is Martin Keen. And on this channel, the Homebrew Challenge, where I brew a different beer each week until I’ve worked my way through a list of 99 beer styles.

But every now and again, I do quite like to deviate from that list. And I think that garlic beer, well, that definitely qualifies as a deviation.

I was chatting with my neighbors, Ben and Elizabeth, about strong, distinctive flavors that you can add to beer. We talked about crawfish and horseradish, and we ended up settling on garlic and looking around. I couldn’t find a lot of existing recipes for garlic beer, possibly quite understandably.

But I did find one person that tried this with an extract recipe, and that’s inspired me to have a go myself. So let’s get to it.

Now in terms of the recipe, I want us to build something fairly simple to really draw out the garlic flavors and not to strength from that with any kind of fancy specialty malt.

So for the base malt, I’m going to use good old American two row pale malt. I bought a two and a half gallon batch. So I am going to use 60% of my grist to be this pale 2 row malt. Which in my case is going to be three pounds overall.

I’m going to get a original gravity of around 10 49, which is going to give a roundabout a 4.95% beer. Okay. So that’s the base malt. Now for specialty malts.

Garlic, well, I think it pairs really well with bready flavors, garlic bread, pizza with garlic and so forth. So that’s what I’m going for with my specialty malts.

And I’m going to start off with one pound of victory malt. That’s 20% of my grist and then one pound of Carapils. The other 20%. Time crush this up in my monster mill. 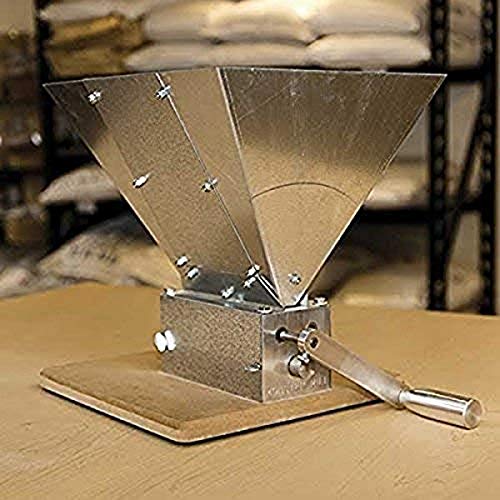 Heavy-duty triple-roller homebrew mill is designed for motorization with adjustable gap spacing for fine-tuning your crush. This is the mill if you're brewing large batches, or want to maximize mash efficiency at any volume.

I’m using the claw hammer supply system, which is effectively brew in the bag. So I can have a fairly fine crush with this.

My two and a half gallon batch. I’m adding a few water salts for my particular water. What that amounts to is that I’m using two grams of gypsum, three grams of epson salt and five grams of calcium chloride.

And then because this beer, the grist for the beer is quite light. There aren’t many dark grains. What I tend to find that I do need to adjust my pH just a little bit as well because dark grains generally bring the pH down and I don’t have any.

So I’m going to add in two milliliters of lactic acid as well.

So the first thing I need to do is to peel these things. It turns out the internet has a lot of different videos for how to best peel garlic. I’m going to give one of these a try. So I saw, I said, first of all, you just peel the outer stuff off. Then you take each of the cloves and you just put them in a jar.

And then just give it a shake for 10 seconds. Worked for some, but not for others. Not working for me.

The other tip online I saw is that you just apply a bit of pressure with a knife And it should just Peel right off. Huh? That seems to work a bit better.

Here is my peeled garlic. This is two bulbs and smells delicious. Okay. That’s going to go into the boil. For the other two garlic bulbs I’m going to roast these using my new favorite kitchen gadget an air fryer.

So I’ve preheated my air fryer to 380 Fahrenheit. And all I’m going to do is I’m just going to cut the tops off of these heads. Steak knife isn’t getting the job done. Hold on. Chef’s knife!

What you want it to do is just put these in some aluminum foil. So put this one back together and then give it a spray with some olive oil. And then this goes into the preheated air fryer for between 15 and 20 minutes.

Yes. Okay. Let’s see how that came out. Oh, look at this. And they just fall out of the casings that, Oh, it smells so good. It’s going to let this cool off before I peel them. Um, but the mash is done. So let’s get the grains out.

I have been boiling for 30 minutes and I’m only gonna make one hop addition, which is going to be right at the start here. And that is East Kent Golding. So this is primarily just going to be used as a bittering hop and it’s going to provide about 30 IBU of bitterness.

So we’ll get the beer bitter, but we’re not really going to add any sort of hoppy aroma or flavor. The garlic needs to be the star of the show.

With15 minutes to go, I’m going to add in the raw garlic. And I’m not even going to use the hop spider for this. I want to get this right maximized flavor in the boil. So it’s going to tip it right in.

Hey, nothing but garlic cloves left in the kettle after I have transferred into my fermentor. Um, I’m going to use for this beer. Wyeast 1028 This is London ale yeast, which I think will work quite well with this malt bill.

I’m at 75 degrees fahrenheit right now. That’s as cool as I could get it. So I’m just going to put this into my chest freezer for a few minutes to cool it down a little bit before adding the yeast in.

Now, the original gravity came in on the money at 1049 and, uh, this definitely smells a little bit of garlic. So I was quite curious to taste the wort, to see how much garlic flavor we got curious and also a little bit afraid.

Cheers. Oh, wow. Oh, wow. That is sweet, toasty, and garlicky. This has some promise.

Now I’ve been a bit undecided as to when to add in the roasted garlic. You could just throw it straight in the fermentor right now. Um, but what I’ve decided to do is I’m going to add this like a dry hop addition.

So I’m going to let the beer ferment. And then just before I reached my final gravity, that is when I’m going to take this and add in this roasted garlic into the fermentor and then leave it in the beer for about a week to condition just as the yeast is finishing up.

It’s been five days later now and I took a little gravity sample. It looks like we’re nearly done with fermentation. So I’m going to add in my roasted garlic, which just even just from unscrewing, this lid smells wonderfully of garlic, or this is going to be good.

The way I’m going to put this in the beer is rather than just dumping it in and potentially blocking everything. I’ve got this little bag here, which I used for cold brew coffee, and I’m just going to put it in here.

By the way, the wort prior to dumping that in, it still tastes of garlic.

Okay. It is time to taste the garlic beer. And I have a panel of tasters here from the neighborhood. Um, I should say that this beer, wasn’t my idea. Entirely responsible. So now they have to drink it. Yeah.

So first of all, does it smell like garlic? That’s I think the first thing. Oh yeah, that sounds very garlicky. No question, right. It’s smooth though. It’s not a, it’s not a harsh garlic, it’s a buttery garlic. Buttery. Yeah. All right. So we’re going to try it?

Got a good color too. Wait. Oh yeah, because we can’t see the color, but it’s a sort of a golden color. All right. Let’s go for the taste, cheers. I mean, has that, I taste the garlic at the end, like after I I’m starting to swallow it. That’s when the garlic pops. Yeah. Half, half the sippy hits you with a garlic and then it just kind of, uh, finishes earthy.

Earthy. I think that’s a really good description because the smell is very strong garlic, you know, but the taste is a little bit of garlic, but it’s, I was worried about like an aftertaste of really strong garlic, which doesn’t have that. Right.

I’m quite enjoying it. I think I am very drinkable and I, I can imagine some really good pairings with some seafood or shrimp, something like a scampi and more garlic butter. Yeah. That would be good.

There’s no reason to should’ve worked, but I think it really did, despite everything, it’s funny. Well, I appreciate the, the idea because this has come out fantastic. It really did, uh, cheers.

Try it, try it at home. Try it for yourself.