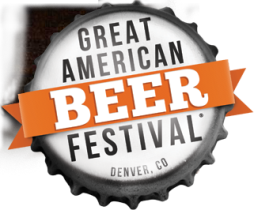 The Great American Beer Festival came to an end last weekend, and now that the fog has cleared I can recount the past week’s events.

This was my second GABF and this year managed to outdo last year.

If you haven’t had the chance to attend a GABF, it’s as much about the events outside the festival as it is the festival itself.

Here are my highlights:

Gwen Conley aka The Sensory Goddess taught 60 of us all about off-flavors in beer. That’s right, we drink bad beer for 3 hours – and it was fantastic. 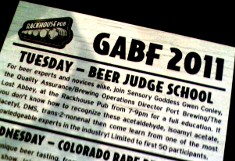 Gwen is the quality assurance director at The Lost Abbey & Pizza Port. She went through intense flavor training (boot camp in her words) which has given her tasting superpowers. I truly believe she could taste a drop of beer in an Olympic sized swimming pool.

We got much heftier doses in our training but it was still a challenge to pick up on some of the subtleties.

Terms like dimethyl sulfide, trans-2-nonenal, and isoamyl acetate put a blank look on everyone’s faces, but when Gwen described them by their flavors in beer: creamed corn, cardboard, and banana – the lightbulbs went on.

That’s a lof of what sensory analysis is – translating chemicals into flavor associations from your memory. It’s cool stuff and something I want to pursue further.

I volunteered at this event held at the Wynkoop Brewery. There only way to describe the beer list is insane. Have a look. They started something new this year where the pourers rotated stations, so although I wasn’t able to try all of the beers, I did try a bunch.

Here were my favorites:

I also finally got to try Sam Adams Utopias (even poured it for a while). It wasn’t one of my favorites but hey, it’s Utopias. What I thought was entertaining (and a little sad) was all the people coming back for fill after fill of this 27% beer when they could barely stand.
Yea, you might have a problem there buddy.

I wasn’t sure what to expect from Ignite but it turned out to be one of the highlights of the week. It was also one of the blurriest. Not only was there unlimited beer but someone had the great idea to make the Denver Off The Wagon folks chug a beer on stage – twice. For me that meant chugging Mycenary followed by Yeti.

The topics ranged from what beer and death metal have in common to beer hashtags on twitter. I hope they do it again next year. Great job Denver off the Wagon for setting this up.

I went to both the Saturday afternoon and evening sessions, with an epic round of coffee drinking in between. The afternoon one was better beer-wise but I was joined by my girlfriend and good friends at the night session  so I can’t pick a winner, not that it matters.

The beer is what mattered and here are my favorites, although I know I’m forgetting a bunch:

Beers That I Loved

See you next year

Besides the events I also got to meet tons of new people and re-connect with friends from out of town. If I missed you this year or you weren’t in town, hopefully we can grab a beer next year.

You will be going, right?