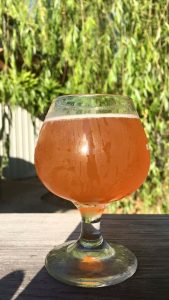 Huge IPAs. Session IPAs. Now, fruited IPAs seem to be the next trend in that beer style.

And why not? They are quite tasty!

In this blog post, we’ll discuss a juicy, fruited IPA recipe brewed in the NE style. And brewed with peaches and apricots.

The following beer was a collaboration between Mt. Carmel Brewing Company (where I am a brewer) and three other breweries (here’s the beer on Untappd). The beer was brewed for Cincinnati beer week, where 20 brewers were broken into teams of four. The teams competed in an NFL Draft-style game where style, specialty grain, local ingredient, and hops were chosen from a list. Our team picked:

Our team’s recipe? A fruited IPA in the NE style: unfiltered and hazy.

We opted for a large oat bill (15%) and used The Alchemist’s Heady Topper yeast to provider the juicy, stone fruit esters. Then, to just make it totally nuts, we did a double dry hop and fruited with apricot and peach purée. 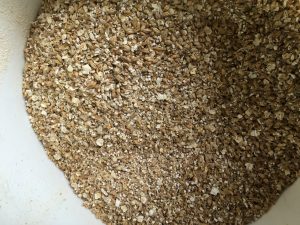 On the Pro side, we did a 4:2 combo to taste which came out to 168 pounds of apricot puree, and 84 pounds of Peach Puree. 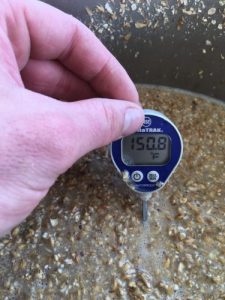 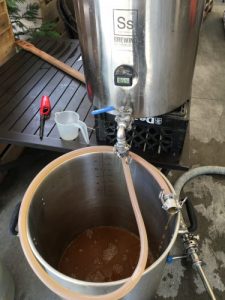 Flavor: Massive flavors of citrus, stone fruit, and tangerine, finishing with a massive apricot flavor. Hop flavor is high, and bitterness is medium low to low. Yeast flavor is apparent, layering the flavors from the hops and malt with fruity esters leaving a juicy finish.

Mouthfell: Large, creamy mouthfeel from the oats, and puree. Carbonation is medium.

Overall Impression: Hella juicy, hella brite, and hella delicious. By far one of my favorite beers I’ve tried. The apricot puree adds a level of complexity that is impossible from hops and/or yeast. The creamy mouthfeel, and apricot notes on the exhale of every sip keeps making me want to come back for more.

Overall, I was very pleased with how the beer turned out. There are a few things I would change if I were to brew it again. I would try a different yeast, preferably London Ale III. I believe the “DIPA” yeast unfortunately masked some of the hop aroma, and think a different yeast (preferably English) would let them shine more. I would omit the El Dorado hops as they gave very little, to no aroma or flavor. Finally, I would only add a bittering addition, then the remaining hops in

Finally, I would only add a bittering addition, then the remaining hops in whirlpool and dry hop. Due to the size of the system we were brewing on, whirlpool additions would have only given more IBU’s, vs. stripping the hop oils for the aroma and flavor

If you decide to try this beer out, let me know what your results are, and what you think!

Luke is a native to Cincinnati, OH, where he is the Lead Brewer at Streetside Brewery, located in Columbia Tusculum. He enjoys to brew all styles of beers but his favorite are New England style IPA’s, Gose’s and Berliner Weisse’s. Some of his notable accomplishments are being a BJCP National Judge, Certified Cierone©, and highly awarded homebrewer.