A Homebrewer Gets to Brew on a Big Boy System

Who could say no to brewing on a commercial system? Not me, that’s for sure. So when my buddy Forrest asked me to join him I cleared my schedule.

You see, he had a brew day planned at Factotum BrewHouse, a new brewery here in Denver. The concept is cool: homebrewers pay to brew their own recipe on a commercial system and then have it served in the tap room. You can read how it all works right here

Chris Bruns is the co-founder and brewmaster. He heads up the brewery operations while his sister Laura is in charge of the business side.

When Chris decided to open the brewery he knew that needed to learn how to scale up from homebrewing to brewing with big commercial equipment. So he enrolled for the Brewery Immersion Course, taught by Tom Hennessy of Colorado Boy Pub & Brewery in Ridgeway Colorado. A lot of now successful breweries got their start in Tom’s class.

He teaches the “Frankenbrew” style of brewing: a method that lets a new brewer get into the game while minimizing their investment. Instead of buying brand new, fancy equipment, you piece your brewhouse together using mostly secondhand tanks. Some of which were never even used for beer brewing.

You’re about to see what I mean in a second. As a homebrewer, I’m fascinated by the process on the commercial scale. You probably are too. And by actually brewing at that level I was able to learn 1000X more than I ever did on some brewery tour.

I’ll describe the process and show you pictures of our Black IPA brew day at Factotum.

Doughing in was my favorite part of the process. The amount of grain you use on a commercial scale is staggering. And this isn’t even a very large system – just 7 bbl (~ 217 gal batch). 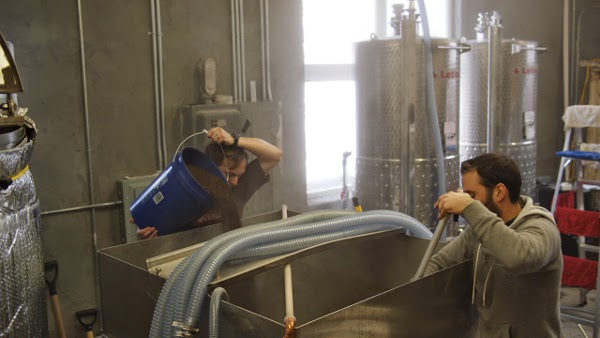 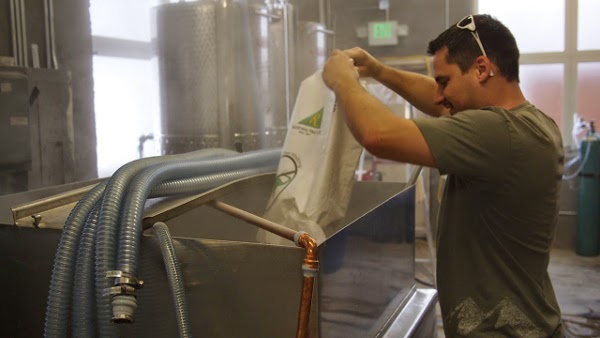 If that doesn’t look like a normal mash tun to you, that’s because it’s not. This is the heart of the Frankenbrew system. It’s actually a former dairy vat. Chris picked it up in Texas and drove it back to Colorado. Then he repurposed it into a mash tun by welding on higher walls and constructing a copper manifold that sits on the bottom and filters the grains.

It worked really well. You’d think not having a lid would result in a ton of heat loss, but we held within a degree or two of our mash temp during the hour long mash. The biggest drawback about this style of mash tun is cleaning it. You need to climb up on a ladder and shovel the grain out into trash cans. I told Chris that he is on his way to a rockin’ set of abs.

Since there is no hot liquor tank, all the hot water is heated in the boil kettle. When it’s time to sparge, the sparge water is transferred from the boil kettle to an empty fermenter (which later in the day will hold the finished wort).

Here’s the fermenter, originally intended for winemaking. Because brewery equipment is in such high demand right now (and prices are sky high) these were actually a better deal and work just fine for beer. 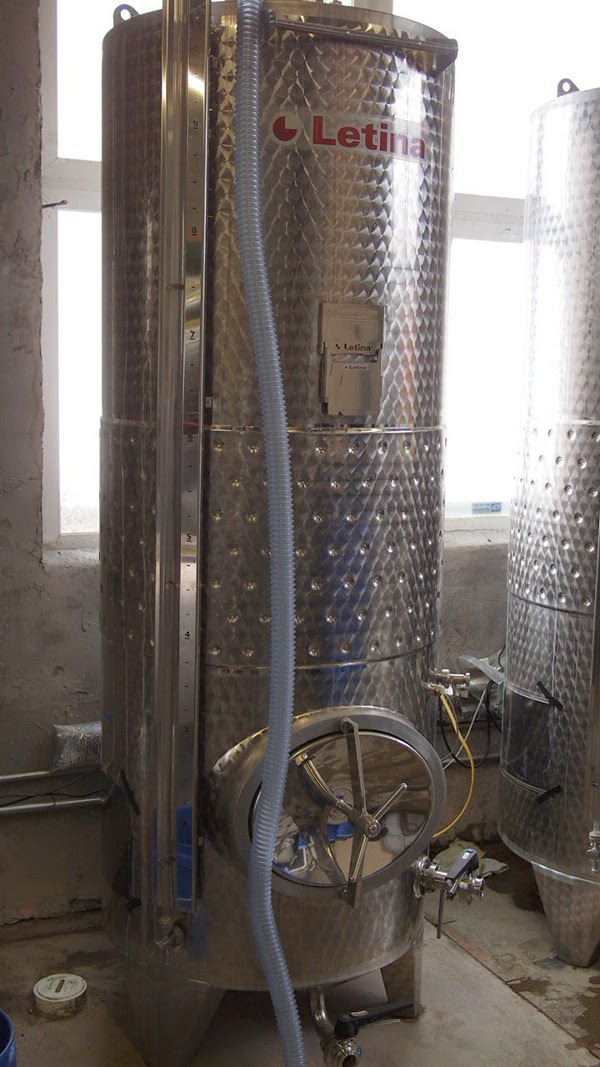 Then we did a fly sparge. We drained from the mash tun to the boil kettle, while at the same time sparging from the fermenter to the mash tun. 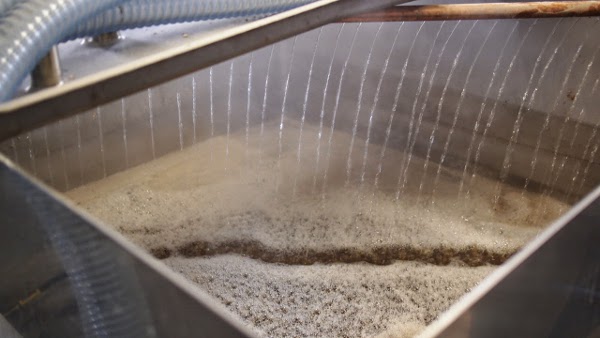 This small kettle below is used as a grant. It’s a handy device. Not many homebrewers use them, but they’re common in commercial breweries. Essentially, it allows you to gently drain from the mash tun via gravity into the small kettle. Then you pump out of the small kettle into the large boil kettle. It prevents a stuck sparge.

The trick is to pay very close attention. It’s a real balancing act because you need to prevent the wort in the small kettle from getting too low or too high, all while maintaining a 2″ water depth on top of the mash. 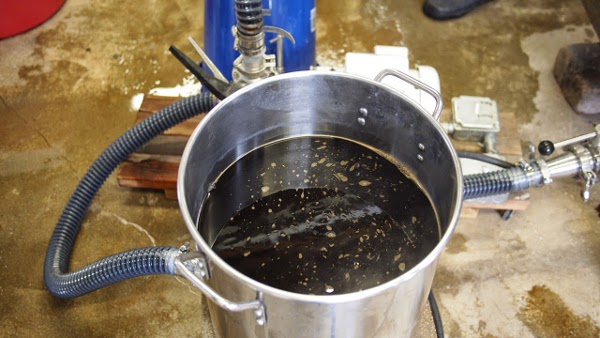 It’s incredible how compact the grain bed gets when fly sparging at this scale. You can literally slice into the grain bed and see the water level as you finish the sparge. 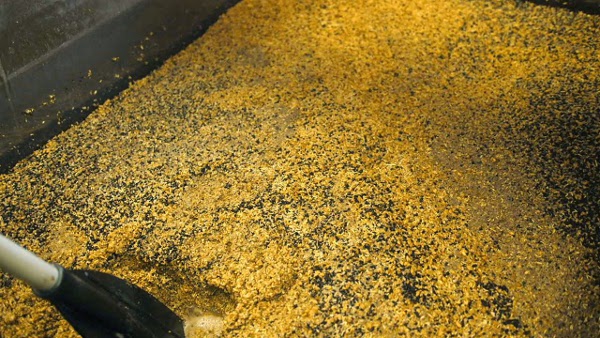 Finally, we conducted our 90 minute boil. The kettle runs on natural gas burners. There’s an exhaust pipe for the gas and a vent overhead for steam.

That’s me tossing in some Chinook hops with 10 minutes left to go: 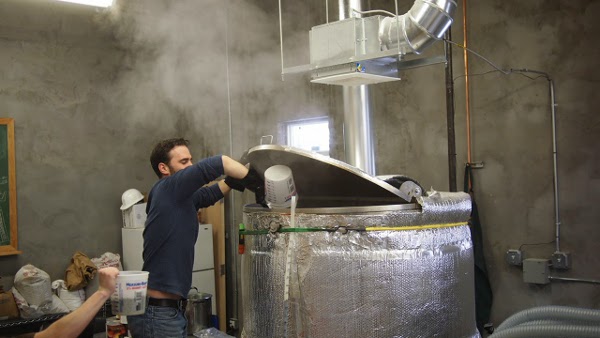 I didn’t get a shot of the chiller but it’s a copper counterflow chiller. After a 10 minute whirlpool we pumped from the kettle, through the chiller, into the bottom of the now empty fermenter. The wort hit the fermenter at about 70°F. We pitched the yeast, and that was that!

I had to bail at that point so I missed cleanup – sorry Chris.

Overall I had a blast and learned a ton. Brewing on a commercial system is both the same and different than homebrewing. The concepts are the same: mashing, sparging, boiling, etc. It’s really the equipment that makes it a whole different ball game. You need to be much more alert too. Not only does a botched batch cost you waaay more money, brewing at this scale is much more dangerous too.

If I were the brewmaster I’d have to really dial back on my brew day beverages. Fortunately Forrest and I were only assistants on this day so no such sacrifice was necessary.

I’ll post an update after I taste our beer in a few weeks. It will be VERY cool to see other people drinking it in the tap room. Which is the whole idea behind Factotum. Colorado homebrewers need to check it out.