One of the first challenges every homebrewer faces is cooling hot wort. Most of us (and probably some you now) are going through the pain of cooling your wort in an ice bath in the sink.

That is where I started. I had sticker shock when I saw the price of chillers. My first chiller was made with copper tubing from HomeDepot. It was kind of wonky, but it worked. I eventually settled on a plate chiller.

I currently use a Shirron Plate Chiller. I have used it so much that ink from the label wore off several years ago. The plate chiller is great. I have my process down and have never had the clogging issues that some people complain about.

I haven’t really thought about changing my chiller because that part of the process works. I didn’t see a reason to think about it too much.

I haven’t tried a different method in over five years, so this test will be interesting for me.

Exchilerator was kind enough to send me a counterflow chiller to test. 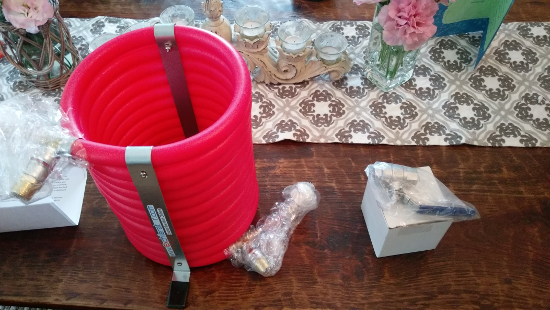 The chiller came well packed and undamaged. The fittings were all packed in bubble wrap and packing peanuts.  My first concern upon seeing the fittings is that I might break them through sheer clumsiness while brewing.

If you are thinking of making this investment, I recommend using the mounting brackets to keep the fittings from getting knocked unnecessarily.

The package ships with the following items:

The thermometer is a nice touch. I have one installed on my pump and have always found it very useful. It seems obvious, but it is even nicer to have the thermometer in the system after the wort has chilled.

It is also very handy to avoid the trip to a hardware store to buy all of the other necessary parts like the garden hose connection. I especially appreciated the Teflon tape.

After unpacking everything and taking inventory, I planned for assembly.

In total, assembly took about 15-mins. Most of the time was spent pulling parts off of my plate chiller to make it brew-ready. If you don’t have an existing setup, you probably want to think through quick disconnects.

I really appreciated that the manufacturer provides assembly videos. I found them helpful.

Overall, the assembly was easy.

Once I opened the box, I was pretty excited about using it. Life didn’t cooperate, so it took me a few weeks to find the time to test it out.

As I mentioned above, it is a little wobbly if you leave it free standing. In the future,  I will use the mounting screws to attach the chiller to a shelf to keep it stable. While I am at it, I also plan on mounting my pump.

Overall, the chiller seems well built and of a quality design.

I planned this test to be more scientific than a simple product review. It consists of a head-to-head chilling face-off. I heated five gallons of water with cleaner (I am overdue for a deep system cleaning). I then ran the test with both Exchilerator and my chill plate.

I heated the water to between 208-210 F with a ground water temp of 74. Once the water reached the correct temp, I recirculated for 10-mins. After circulating the heated cleaning solution, I cut the heat and timed how long it took to chill to 8 degrees F above groundwater temperature.

During the test, I initially intended to check the water temp at 2-min intervals and record the results. As you will see the Excillerator didn’t cooperate.

Holy crap that was fast. I was so impressed the first time through that I reheated the water so I could get video.

The good news is that they both performed very well. I typically recirculate during chilling for 15 to 20-mins. I now realize that I am wasting water.

The plate chiller performed much better than I thought.  It chilled the wort to 82F in about 6-mins. Overall, I was very happy with the performance. The Shirron Plate Chiller retails on Amazon for right around $100.

The Exchilerator is pretty spectacular. It dropped the water over 100 degrees F in the 29-seconds. It was done chilling after 2-mins. The results were so surprising that I re-ran the test to get a video because it didn’t seem believable.

The design is really great. The wort in and out with the thermometer is a great idea and very helpful. At $183 it is close to twice the price of the Shirron Plate Chiller I own.

I think the difference between 2 and 6 minutes is significant as brewing step (even more for larger batches). Being able to chill my wort in 2-mins turns chilling and filling carboys into a single step for me. At 6-mins, I would be likely to do other tasks while I am waiting for it to chill (and probably go well beyond 6-mins).

For brewers that do large batches (10 – 20 gallons), I think this would be well worth the money.  For brewers doing five-gallon batches, it really comes down how much your time is worth to you.