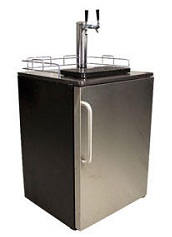 The following is a guest post from Caitlin who works for Micro Matic.

My keezer plans have become pretty popular on this site so I thought it would be appropriate to have a post on the history of the kegerator and some of the new technologies available, like the Freedom Kegerator she talks about. Considering a good percentage of my keezer parts came from Micro Matic, Caitlin is the right person for the job.

Enter Caitlin
We’re all familiar with the standard kegerator — a refrigerated compartment that houses a keg and dispenses a nice cold draft beer in the comfort of your own home. Kegerators prolong the life of your beer and can keep a tapped keg fresh for up to four months (although it’ll probably be empty by then!)

Kegerators have become a staple for today’s high-line man caves, but beer lovers of the past didn’t always enjoy this same luxury.

Although no one can really pinpoint when kegerators were invented, the earliest version of a kegerator was likely created during the early 20th century when refrigeration was commercially available for the first time in metropolitan and industrialized cities. Bars stored kegs in these new-fangled refrigerators and walk-in units up until 1919, when Prohibition started.

After Prohibition ended in 1933, and beer was made legal again, the refrigeration and tap technology existed for the creation of rudimentary kegerators. These early kegerators were used in commercial settings like bars and pubs and kept patrons coming back for more.

Fast forward a few decades to when kegerators were introduced to the home setting.

The first home kegerators made their appearance in the 1980s after a 1978 congressional act made home brewing legal again, decades after after Prohibition ended. The home brew resurgence allowed individuals to once again enjoy brewing their own beers and consuming them in the comforts of their own homes. With the home brew flowing freely once again, the need for storage and dispensing equipment was great.

Kegerators today have more advanced technology than the home brewers of the 1980s could have ever dreamed of. 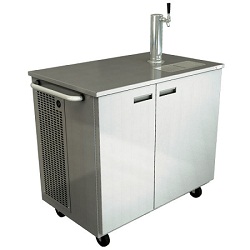 Since the 1980s, kegerator technology has come a long way. It’s become standard now to have a built-in thermostat to maintain the perfect storage temperature of beer. Kegerator tapping systems including CO2 gas cylinders, CO2 regulators, keg couplers, and draft towers have also been streamlined to provide the best possible draft beer experience.

The latest manifestation of kegerator technology is Micro Matic’s Freedom Kegerator — the world’s first battery powered kegerator. Unlike all other kegerators that require an AC power connection, the Freedom Kegerator has a rechargeable 12V battery that can maintain a chilly 38° for up to 24 hours.

This latest advancement in kegerator technology, the mobile beer kegerator, is perfect for tailgating, backyard parties, and picnics as well as commercial uses like stadiums, hotels, and cruise ships. So as you sip on your favorite draft beer, whether in the comfort of your own home or while tailgating with your friends, think about how far the kegerator has come and all the possibilities for the future of kegerator technology!

Who is using the Freedom Kegerator?

I asked Caitlin about Micro Matic’s Freedom Kegerator customers and what they thought about it. One customer is Crown Valley Brewing and Distilling from Missouri. Here is what their director of operations says about it:

“We like to have options when going out in the marketplace to demo or taste our products. Crown Valley has a variety of Brand Ambassadors but seldom do we ever have more than one rep at any event. Some of the biggest obstacles we have when doing festivals or outdoor events are packing up coolers with kegs and ice that make it very hard for one person to move around. On the smaller festivals we might go through a couple of kegs and have to handle the jockey boxes, more ice and keeping the half empty kegs cold till it gets back to the Brewery so we do not waste any beer.

I feel this unit is best used in all applications its battery powered capabilities, but especially in:

The unit has been a solid investment for a diverse company like ours, and I would recommend it for any operation that wants to spend less time doing back breaking keg lifting during tastings and smaller event.”