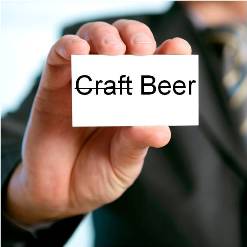 Can it all be beer, and all be great?

I look forward to the day when we can get rid of the “craft” and just call it all beer.

I say this in the wake of the Brewers Association announcement that they are raising the cap on what qualifies as a craft brewery, from 2 million barrels per year to 6 million.

You can read the article for the details, but basically the Boston Beer Company (Sam Adams) was on the verge of going over the 2 million mark until the cap was changed. Now they will not only qualify as a craft brewer for a long time to come, but they’ll avoid the higher taxes that they were facing.

A lot of people have been pissed off about this. They see it as special treatment for Boston Beer (which is part of it) and condemn the BA for playing favorites.

What do I think?

Frankly I don’t give a damn. I understand why the BA did it – statistics. But if you’re losing sleep over this,  please identify yourself in the comments so we can all make fun of you.

What I do care about is getting people into craft beer in a way that is cool and approachable and not sappy or elitist. I’ve spoken before about turning people on to craft beer and how the sappy sales pitch doesn’t work. Nobody is going to put down their Bud light and pick up an IPA because you tell them the brewer was passionate when he made it.

Don’t get me wrong. Now I care about these things. I’m glad my brewer has a face and puts his creativity and passion into what I’m drinking. But the 20 year old Billy who made a cowboy hat out of a Natty Light box? You weren’t going to sell him on “passion”.

Which leads me to my point. I don’t like the term craft beer. I think it sounds elitist and the name itself is a turnoff to people. Even telling people I prefer craft beer gives me this douchey feeling. Sometimes I’ll even say microbrew because it sounds better.

Beer should be upbeat and fun, and that’s exactly how we should sell it to people. At least in my fantasy land…

In my fantasy land there wouldn’t be craft beer, there would just be beer.

The reason we have the term craft beer is to distinguish it from the yellow fizzy stuff that occupies 94% of the market. We need this term (or a term). They are very different products, so we need to call them different things.

But in my fantasy land, all beer would be craft beer, so we wouldn’t need this stupid term.

Quick! When I say the word “beer” what comes to mind!?!

Ok, but you guys are beer geeks.

There we go. See, in my dream world Brother Bluto would immediately think of a Belgian Saison, not Bud Light.

Or if the yellow fizzy stuff still exists but as the minority beverage then maybe we can flip it. Since it’s the outlier, it gets the stupid name. YFS we’ll call it. There will be a YFS association representing the YFS brewers. What a sad and sorry bunch they are.

True, part of the definition of craft beer refers to the size of the brewery. This gets down to what craft beer means to you. To me, it’s about quality, not size.

I don’t dislike breweries just because they are big. Are they making good beer? Are they doing it legally and ethically? Cool, I’ll drink it. You might want to cover your ears, but I’ve had beers from Coors’ “craft” division that have been better than actual craft brewery beers. Small doesn’t equal good.

But I look forward to the day we can get away from this fruitless pursuit of trying to define a craft brewery. In today’s landscape with growing breweries, consolidation, and yes, breweries actually making good beer from adjuncts, the gray area is growing wider and wider.

So maybe someday my fantasy world will become reality and great tasting beer will be the default. When we think of beer, my homebrew a silky smooth porter will come to mind.

Until then, I’ll keep calling it craft beer and explain to people that basket weaving has nothing to do with it.