How Will Craft Breweries Compete Against Each Other?

725 – that is the number of new breweries in planning according to a recent Brewers Association press release.

It’s an 86% increase over last year’s figure. All of this growth in craft brewing begs the question – how will these breweries compete for the same craft beer drinker’s dollar?

The press release also reports that sales by volume are up 14% in the first half of 2011. Despite the growth in craft beer sales, it’s likely we’re reaching a point where production capacity is outpacing demand. Even the BA director Paul Gatza is skeptical about the ability of these new breweries to compete:

“Will they all make it? No, but many will if they produce high-quality, interesting craft beers and can get them to market through self-distribution and beer wholesalers and beer retailers.”

What will craft beer competition look like? Will it get ugly? Will they compete on price? Will we see less collaboration & more ad spending?

So far, craft breweries have had it pretty good…

A rising tide lifts all ships. The increased popularity of craft beer means that breweries are able to gain market share by growing the entire pie instead of trying to grow their own slice of a limited pie.

New drinkers are entering the craft beer market, mainly as converts from the macro market but from other markets as well. It’s been great for craft brewery bottom lines and consumers through better access, higher quality, and more diverse offerings.

Overall it’s in the industry’s best interest to keep growing that pie, but it’s only going to grow so fast. With all of the new openings, a brewery must differentiate itself from the rest.

So what we’re left with is a market where craft breweries must compete, not only against the macros, but against each other.

I’m jealous of all these fancy infographics around the web so I decided to create my own in order to illustrate the above concept. 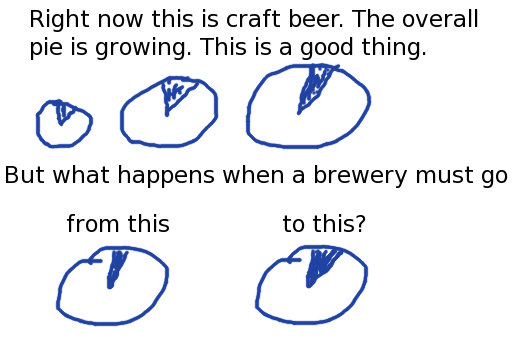 Remember, just because the overall pie is growing, doesn’t mean breweries aren’t competing against each other. It’s not enough to brew the beer, you need to sell it.

I see this already in my local market. Just a year ago it was much easier to decide where to get a beer in Denver. With all of the new breweries that have opened, that decision isn’t so simple.

It must be noted that many breweries won’t even get a piece of the pie as many will fail right off the bat (lacking exact numbers here).

But there is a question for those new breweries that do gain a foothold plus the existing breweries:

“When Joe Craft Beer 6-Pack goes to the liquor store, how will you make sure he picks you?”

Standing Out in a Sea of Beer

There are many ways to compete: quality, style range, brand image, price, location.

When thinking about this topic a book that I read in my MBA program, The Blue Ocean Strategy, came to mind. To sum it up, the theory is this:

Compete where there is no competition. If you find an untapped market space, then the competition becomes irrelevant and you experience highly profitable growth.

A tool called The Strategy Canvas is used to illustrate the blue ocean strategy. Here is an example using Yellow Tail Wine. They were able to appeal to a larger consumer group by breaking with tradition and creating a simple, fun wine brand. 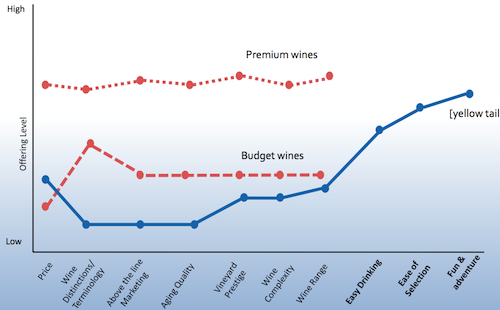 “Instead of offering wine as wine, Casella created a social drink accessible to everyone: beer drinkers, cocktail drinkers, and other drinkers of non-wine beverages. In the space of two years, the fun, social drink [yellow tail] emerged as the fastest growing brand in the histories of both the Australian and the U.S. wine industries and the number one imported wine into the United States, surpassing the wines of France and Italy.”

The wine industry is different than the beer industry, but it does get you thinking.

When everyone in town is making a great IPA, how will you compete? Start brewing sours? Whoops, every is brewing sours now too.

I believe we’ll see breweries stand out by venturing into uncharted waters. What’s in those waters I do not know, but hey, I’m not the one selling beer ; )

But craft beer is different…or is it?

I do believe that craft beer is a special industry as evident by the camaraderie, collaborations, and friendly relationships. Again, I think the best strategy these breweries can take is to keep growing the pie by pulling in people from the macro world.

To say that craft breweries will never compete against each other, however, is delusional. They’re competing right now.

It will be interesting to watch if the competition gets heated. What I do know is that as always, the consumer will win.

Let me know what you think down in the comments.