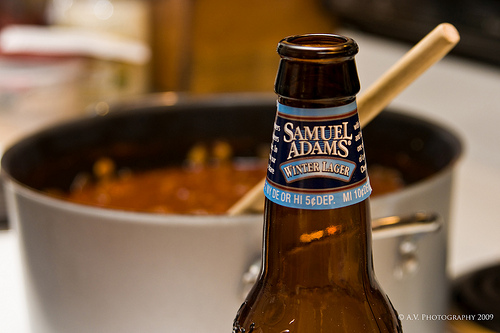 Note: This is the 5th post in a 5-part series called Beer Newbie Missions, a guide on how to like beer.

Beer is food. Have I mentioned that?

So agreeing that beer is food, it’s time to use it as an ingredient to enhance a dish. We’re going to cook with beer.

It’s not that crazy to think of cooking with beer if you consider that wine is very commonly used in recipes. They’re both just flavored liquids used to add flavor to a dish. This means you can substitute it for water or wine wherever they’re called for.  Sauces, marinades, and soups are all good candidates.

Tips for how to cook with beer:

To start off cooking with beer we’re going to make something simple and delicious. This beer chili recipe is adapted from the fantastic book, “The Naked Pint” by Christini Perozzi and Hallie Beaune.

You’ve reached the end! Congratulations on coming so far. If you’ve tried all the beer styles up until now you’re ahead of 97% of the country with your beer experience. These last brews represent some of the biggest and baddest in existence. If you can handle them you can handle anything.

As we wrap up, keep in mind that there are dozens more styles out there and it was difficult to decide on which few to feature. I urge you to keep trying new styles and the beer epiphanies will keep on coming. You’re off to a great start.

Leave a comment down below with your thoughts on cooking with beer or any of the styles listed.

Congrats again for completing the beer missions. You are officially beer geeks ; )