Step up to the plate

Okay, so you’re making progress with your homebrews. You’ve made some beers that you and your friends really like. Everyone who tasted your last IPA said you really hit it out of the park.

You feel as if you’re ready to take the next big step. Okay, maybe not the major leagues just yet. You’re not ready for brewing on a larger scale or on a professional basis, but wouldn’t it be nice to know what people outside your circle of friends or your homebrew club think about your beer? 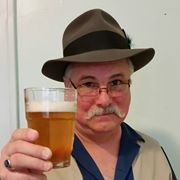 Here’s to the contestants!

There are homebrew competitions taking place all over the world all the time. The BJCP homepage has a link to sanctioned competitions. They’re a great way to have your beer rated by people trained in the craft of evaluating beer. It’s almost like having a scout come to your high school and check out your swing.

I got involved in competitions because Ed told me to. No, really.

It was my first attempt at a lager, too. My wife had bought me a refrigerator for making lagers as an anniversary present (who said romance was dead?). I took a recipe for an amber ale, switched the yeast to a lager yeast, and turned Amber’s Amber Ale into Amber’s Amber Lager. 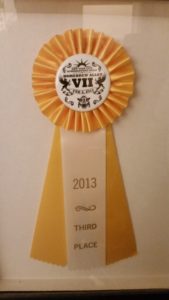 You know you want one

My brother, Ed, tasted this beer and told me he thought I should enter it in a competition. So I found one nearby and entered it. And that was it. Except that I actually won a third-place ribbon in the Dark Lager category. So, okay, I didn’t exactly hit a home run my first at-bat,but I like to think I got an RBI double.

True story; that’s exactly how it happened. It was a total fluke, as I look back on it. Not only was my first at-bat an RBI double, but I had only been trying to bunt.

So I was all ready to become the next rookie phenom. I mean, this had to be more than beginner’s luck, right? It’s easy! I can enter a bunch of competitions and win a bunch of ribbons! I’ll be an All-Star!

Woah, not so fast there, Mr. Oktoberfest. Even though I’ve entered five different beers in five competitions since then, I haven’t earned a podium spot other than that first one in 2013.

Every competition is unique; a lot of different factors come into play, and those factors are always changing. For instance:

Each category is handled by two judges. These two people sit at a table and drink beer all day, which isn’t as great as it sounds, at least not in these circumstances. They’re not just guzzling beer, of course; they’re tasting and evaluating it, using their training and knowledge to compare and rate each beer they’re given.

Their samples are shared from the same bottle. The judges mark their scoresheets and consult with each other to make sure their evaluations agree. It would be difficult to justify one judge scoring a beer several points higher than the other judge. It’s also a way for them to clarify and confirm the entry’s overall impression. Their individual scores don’t usually differ by more than one or two points, and the final score given is a mid-point grade, e.g. Judge 1 gives a beer a 35 and Judge 2 gives it a 33, so the final score is 34. Yeah, Judge 2 is a jerk.

The box score (aka The scoresheet)

Knowing how the judges evaluate the beers can provide insight, both when you’re preparing your entry, and when you’re evaluating your recipe afterward. After all, if you can think like a judge, it may help you make improvements.

At the top right, you’ll see spaces for Category # and Subcategory. As obvious as this may seem, I’m going to say it anyway: Make sure you enter your beer in the proper category and, if applicable, subcategory. You might brew the best brown ale the judges have ever tasted, but if you enter it in the British Bitter category, you just trotted out to shortstop with a catcher’s mitt jammed on your fist.

There are five categories for evaluation, listed on the right side of the scoresheet. They’re fairly self-explanatory, and they will vary with each style, as noted. So it’s good to know if the head on your beer is supposed to persist or if that style allows the head to dissipate.

Notice how those categories are arranged, too. We all should take these same steps, in the same order, when we evaluate a glass of beer.

I’ve only scratched the surface of these categories, but this should give you an idea of how completely the judges are assessing each entry.

The various categories don’t carry equal weight, as you can see. While appearance is important, it only carries 3 out of 50 points, whereas flavor, with 20 potential points, is king. So it’s sort of like a scout evaluating a prospect and saying he can hit with power from both sides of the plate, but he’s not a base-stealer. Some aspects of the game are more important than others. Still, in brewing, as in baseball, the Hall of Famers are usually 5-tool players.

Each category is assigned a number out of the potential perfect score of 50. So your beer might get 9 out of 12 for Aroma, go 3 for 3 in Appearance, 13 for 20 in Flavor, 3 for 5 in Mouthfeel, and 7 for 10 in Overall Impression. 35 out of 50 seems a little disappointing, especially since all your friends loved that beer at your last cookout.

But hold on, rookie; don’t start packing for the minors just yet. Look at the box in the lower left corner. A score falling between 30 and 37 is “Very Good” and is “Generally within style parameters, [with] some minor flaws.” That means you’re doing quite a few things right, and with a few adjustments, you’ll be game ready for another competition pretty soon. Your score doesn’t need to be perfect to do well. My third-place ribbon beer scored a 32.

While your final score determines whether you win a prize, there is something more important to be gained from competition scoresheets. I’m talking about the comments following each category. This is where the real evaluation comes into play. Numbers tell you how your entry rated as compared to A) the “ideal” example of that style and B) the other entries. But the comments address your specific entry. The numbers matter, but the comments reveal what’s important. Kind of like taking batting practice with your coach alongside you, adjusting your stance and timing mechanisms.

The comments allow you to get inside the judges’ heads and know just what they were thinking when they sampled your beer. Fruity esters in the aroma? Check the style guidelines and see if that’s a positive or a negative, and if it’s the latter, try to find out what causes that and fix it. Not enough body or carbonation? Better look into your malt bill and priming procedure.

Usually the judges’ comments are meant to be helpful and encouraging. I’ve always found them to be so. But judges are human, and they’re volunteers. And sometimes people have bad days. So while I’ve never encountered nasty comments on any of my scoresheets, I can see it happening. That would be unfortunate, but you need to try to be understanding if it happens.

Overall, though, the judges want you to do well. And they want to encourage you to do better, so their comments are geared that way. A flaw is a flaw, and if your lager shows signs of diacetyl, they’re going to point it out and perhaps even suggest ways to avoid it in the future. Even on a beer they scored low, I’ve found the judges’ comments to be encouraging. I was told the recipe for my Ordinary Bitter was on the right track, and though I didn’t expect much when I entered it, I was gratified to know they thought so. My process may have fallen short, but the base recipe showed promise.

Besides, sometimes you get a really nice compliment. My winning lager prompted one of the judges to write “Nice job!” and I lived off that comment for months. And the judge who scored my other Dark Lager at a 37 (just one point more would have put it in the “Excellent” rating) wrote “Maybe reduce the amount of bittering hops and this would be a great Dark American Lager.” Yes, that’s a subjective evaluation; that judge prefers his dark lagers to be less bitter, even though my IBUs were within the style range. But that comment made me feel accomplished and appreciated. A Certified Beer Judge told me that my beer is nearly great!

There are some unknowns and intangibles that might come into play in any competition you enter. I mentioned above that you don’t know how many beers you’re competing against for any given style, although the more popular styles, such as IPAs and Pale Ales, are likely to have more representation. You won’t know until the results are posted after the competition. But even if it’s a small field, you still have those others to beat. Not every left-handed knuckleball pitcher makes it to the majors.

It may also make a difference where in the flight your beer is sampled. Let’s say, through the random selection process, yours is first. You might think this gives you an advantage, since the score you’re assigned becomes the standard for those that follow. If you’re further down in the flight, you’re trying to measure up to what came before. Does it matter? That’s tough to say, and I would contend that the only thing that matters (as it should be) is whether your beer is a good example of that style. After all, if you’re as great as Lou Gehrig, what difference does it make that you follow Babe Ruth in the batting order?

Speaking of Ruth and Gehrig, another unknown is always going to be the level of the other competitors. As with all hobbies, there are those who really go all out. Some homebrewers have spent thousands of dollars on the latest equipment, work tirelessly to create specific chemical compositions when it comes to their water, grow their own hops, and count and name every single individual grain they use (“Wonderboy” and “Black Betty” are already taken). Some people brew more beer for competitions than they brew for drinking, and they’ve got an entire wall dedicated to their championship ribbons. I know a guy who is currently having the basement in his new house remodeled and engineered specifically for brewing. But don’t let these possibilities deter you. After all, Willie Mays had a terrible debut until he whacked his first epic homer off Warren Spahn, and we all know the rest of his story.

Believe me, it’s nice to win. Just ask Derek Jeter. I’m very proud of my ribbon, and I want to win more. And I want to improve my recipes and my process as much as I’m able on a scale that’s comfortable for me. Otherwise why spend the time and money brewing my own beer in the first place?

But the real reason I enter competitions is to get the feedback from people trained in tasting and evaluating beer. Because it’s one thing to have your dad tell you that you’re waiting on the curve pretty well; it’s another to have a major league scout say it.