As home to 168 breweries, the Great American Beer Festival, and some of the best craft beer in the country, you wouldn’t think there would be much for Colorado beer drinkers to be unhappy about. However, we are once again having the annual debate about the “Grocery Bill” which would allow full strength beer to be sold where you buy your food. A quick primer if you’re not familiar with it…

Colorado grocery stores and convenience stores cannot sell beer that is higher than 3.2% alcohol by volume. To get “full strength beer”, you must go to the liquor store.

I moved to Colorado from Virginia in mid-2010 and was unaware of this law. A friend nearly dove in front of me to block me from buying beer at King Soopers. I had no idea it was 3.2% beer.

Here’s one of the arguments from craft brewers and others who oppose the bill: Small liquor stores (aka “Mom and Pop” stores: see below) make most of their money selling full strength beer. If grocery stores are allowed to sell full strength beer, shoppers will start buying their beer while picking up dinner instead of visiting the liquor store. The small liquor stores will go out of business. Because it’s unlikely that grocery stores will stock the more limited and high-end craft beers, consumers will have reduced access to these products.

To be upfront about where I stand, I don’t buy many of these arguments and fully support the sale of full strength beer in grocery stores.

Supporters of the bill are quick to point to other states that don’t have a grocery store restriction where craft beer is thriving – California, Washington, and Oregon being the prime examples.

The Myth of the “Mom and Pop” Liquor Store

The main argument of those who oppose the grocery bill is that it would put mom and pop liquor stores out of business.

Let me tell you about these establishments… 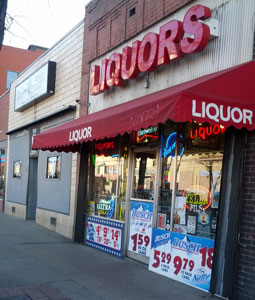 The name makes you think of a small, cozy shop where you walk in to a warm welcome from a friendly old couple that resemble grandma and grandpa.

How can we put pappy out of business?

While these places do exist, the reality is that most liquor stores are nothing like this and frankly they are horrible from a beer perspective. Walk down my street and you’ll see three within three blocks.

They are dirty, have bars on the windows, and vagrants are drinking vodka outside. The beer selection? Amidst the Bud and Coors are a couple of shelves of Fat Tire and Avalanche. Be careful though, they’re usually past their expiration date. The owners barely speak English and know nothing about their products or beer. I once made the mistake of asking for a beer made in Belgium and was pointed to Fat Tire.

These are many of the “Mom and Pop” liquor stores that we’ll lose with the grocery bill, and I won’t shed a tear when they’re gone (note: I don’t believe as many will go out of business as people predict, but that’s another issue).

Not that it matters who the owner is, but the value they offer the customer does matter. If you can’t compete on selection, customer service, or price, then why should you remain in business? It shouldn’t be because of government protection.

Will We Really Lose Access to High-End Craft Beer?

The notion that we won’t go out of our way to purchase specialty beers is preposterous. Do wine and cigar enthusiasts simply accept whatever the grocery store has to offer? No, they go to specialty shops for them.

That’s what will happen with craft beer. I would love to be able to pick up a six-pack of Odell IPA at the supermarket, and when I am in the mood for Crooked Stave I will make the drive to the bottle shop.

For me, it’s all about consumer choice. As long as there is demand for high-end craft beer (and there is), there will be a merchant there to provide it.

Overall things are pretty damn good here. I can’t complain much, but I hope for a day when obscure, outdated alcohol laws are a thing of the past. Not just in Colorado, but across the country.