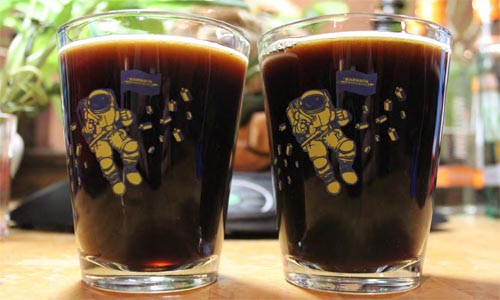 When venturing to the dark side of brewing, are you a Jedi or a Sith Lord? Darker beers aren’t the easiest to make and using the force isn’t the answer.

Brewers will often argue about the best way to use dark grains.

Well, I decided to do my first side by side comparison and see if there really is a difference.

(You can read this post in Yoda’s voice; I won’t judge you.)

Stouts need to age for them to hit their stride. When they are young, they can have a bit of an astringent bite to them. This has to do with tannins being released from the husks of dark grains along with prolonged exposure to hot temperatures. This astringency fades once the stout has aged, but is it possible to eliminate these tannins and produce a stout that is smoother in its infancy?

This is where cold steeping comes in.

Technically, dark grains do not need to be included in the mash. During the kilning process, the majority of proteins and starches are broken down which means less fermentable sugars produced during your typical mash. The high acidity of dark grains are beneficial with pH levels in the mashing process, however there are other means to alter the pH mash.

I could bore you with more technical aspects of dark grains and mashing, but that’s for another post. The purpose of this little experiment was to see if you could taste a difference in two stout recipes that used the same grain bill, mash temperature, and fermentation method. One batch cold steeped the dark grains while the other batch would be mashed regularly.

Would the cold steeped stout be smoother while it was young? 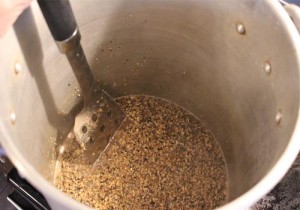 Being a bit of frugal brewer, I decided to only make 1 gallon batches of each beer and do a “split test”. I figured that was enough to have people sample it and give me some feedback without having leftovers of a mediocre beer. 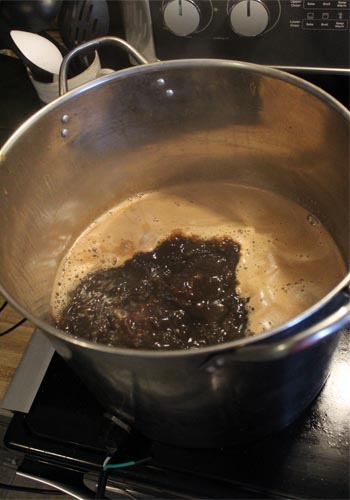 Both recipes were mashed at the same temperature and followed the same recipe. One recipe had cold steeped dark grains and the other was mashed as usual — with all grains included in the mash.

Step 1: Measure out 2 Quarts of water per pound of milled dark grains. Because this is a small recipe, I only needed 4 cups of water. 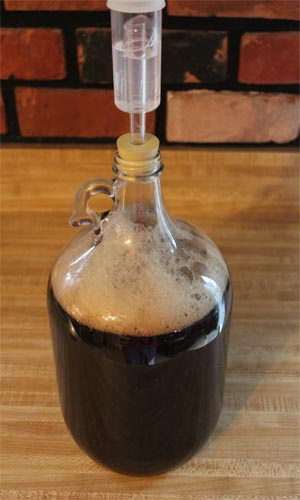 Step 2: Mix the grains and water in a pitcher, and pop it into the refrigerator for 48 hours.

Step 3: Using a paint strainer bag or fine colander, strain out the dark grain liquid and set aside for the boil.

Step 5: Add the cold steeped grain liquid at the end of the boil. Adding it early in the boil might still bring out the bitterness of the dark grains which is what we are trying to avoid. I added mine in the last 10 minutes of the boil.

Mash the dark grains, base grains, and specialty grains all together.

I had friends, family, and fellow home brewers taste both beers. I did a blind triangular taste test where I gave them two of the same beer and one of the other. I switched out the cold steeped stout and regular mash stout. I then asked them to identify the beer that was different and tell me why if was different.

I was actually very surprised by the results.

14 out of 16 people were able to identify the cold steep versus the regular mashed stout, with 93% of them reporting it as being smoother. Not only did beer self proclaimed beer enthusiasts taste the difference, but so did people who claimed they were “not much of a dark beer fan”.

I was hoping to produce a stout that tasted smooth, aged, and have people feel the same way. I was pretty shocked with not only the final product, but how obvious it was that cold steeping made for a better darker beer.

Does that make me a Sith Lord? Maybe. But it is a game changer for me in home brewing. I will use this process for all my dark beers from now on.

Try it out yourself and comment here with your results. You won’t be disappointed.