Chocolate: A Natural Fit for the Craft Beer Lover 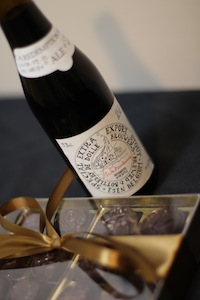 There was a time in my life when my idea of pairing beer with chocolate was drinking a Natty Light with a Kit Kat Bar.

Ok so I haven’t evolved much. My beer choices have improved but the chocolate I eat isn’t exactly artisanal. That will soon change, and I will tell you why a little later.

We shouldn’t judge, we should only present them with opportunity. Should they reject it, so be it. We’re beer geeks not beer snobs.

The truth is that we can only indulge so much. For better or for worse, craft beer has opened my eyes to other artisanal food products. Artisanal pizza, artisanal cheese, artisanal coffee, and now artisanal chocolate.

You have to pick and choose because it’s tough to do it all. But chocolate, oh sweet and heavenly chocolate, I choose you.

Why I’m a Good Boyfriend

Besides my ability to grab the remote control off the ottoman with my feet and gracefully toss it into my outstretched hand, I’m pretty good at picking out presents for my girlfriend. This is the story of how I’ve decided I need good chocolate in my life.

I met Jenny Thamer of Lioni Chocolate from her article at CraftBeer.com. Sarah loves chocolate and when I saw that Jenny lives just up the road in Boulder I knew that a great anniversary present wasn’t far away.

I gave Jenny a call and we talked about what type of chocolates to make Sarah. Jenny wanted to customize the chocolate to Sarah’s palate, so she quizzed me on what foods she likes. I honestly don’t pay a lot of attention to what food she likes (oops) so I went with what I did know – beer!

Stouts, porters, brown ales (especially nut browns) – these are all Sarah’s favorites and Jenny could mimic the flavors in chocolate. That’s when it struck me. Being a chocolatier is a lot like being a homebrewer. You use food preferences to drive your recipes. You find what people like and weave that into your beer recipes.

But here is where Billy’s present came in. Jenny is a fellow beer nut and the truffles paired amazingly well with the De Dolles Extra Export Stout she recommended. I knew I had to get more into chocolate, and especially pairing it with beer. There are just so many complimentary flavors between these two fermented foods. 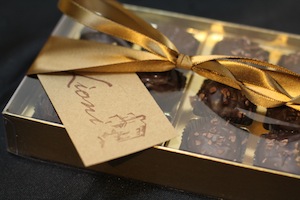 My present to Sarah - truffles from Lioni Artisan Chocolate

If you feel the same way, here’s what Jenny has to say about beer and chocolate:

My rule is to try a lot of beer with chocolate and get a feel for what you like — whether you want to find balance between opposites (white chocolate with a hoppy fruity beer) or similarities (like the caramel:bitter in the truffles and the Export Stout). I generally prefer my high % dark chocolate with a beer that is not too carbonated, a little bitter too, rich, thick and chocolately (of course). For me, the head is a good indicator — often darker the head, the darker the chocolate. Also, I always take a bite of the chocolate first and let it melt a little, then follow it with the beer.

Another good source for beer and food pairings is the little talked about, but fantastic book by Sam Calagione and Marnie Old, He Said Beer She Said Wine

. From my autographed copy (had to say it), Sam tells us:

There is probably no dessert pairing more simply perfect and decadent than a roasty stout and dark chocolate….Because the brewer can change the volume and types of dark grains for infinite variation, more bitterness, more roastiness, and more chocoalte nuance within the beer itself, there is just more opportunity for perfecting the marriage between bitter and sweet than there is with wine.

Chocolate is a lot like beer. The mass majority eats M&M’s and Hershey’s kisses, while those on the inside know there is something far greater. Ditch the Halloween candy and get the real stuff. If you don’t know where to look, talk to Jenny.

Would you like more posts on beer and chocolate? Am I the only one that’s had Natty Light with Kit Kat Bars?