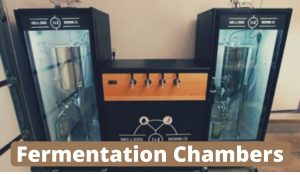 Just how important is your fermentation temperature in homebrewing? I came across a startling result from an experiment reported in the new homebrewing book Yeast, by Jamil Zainascheff and Chris White. Chris White is the President of White Labs, a brewer's yeast manufacturer. White Labs conducted a study in which two of the exact same ales were brewed, except one was fermented at 66°F and one at 75°F. They then tested for the difference in flavors. Most of the flavors that we'd consider "off-flavors" showed a moderate increase, but what was really startling was the increase in … END_OF_DOCUMENT_TOKEN_TO_BE_REPLACED 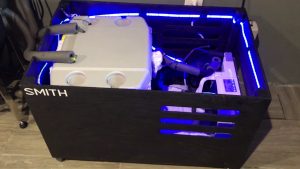 I don't know about you, but a nice cold beer on a warm summer's day is one of the best things in life! Making great beer requires precise temperature control, which is made possible with a homebrew glycol chiller. Temperature control during the process of beer fermentation is crucial in keeping the consistency of the flavor you want to achieve. Buying the high-end Icemaster or SS Brewtech chillers would be an ideal investment. But in case this is off your budget, we've written this article to help you build your own DIY glycol chiller. What is a Glycol Chiller? Special cooling systems … END_OF_DOCUMENT_TOKEN_TO_BE_REPLACED For coffee lovers out there, fermented coffee has brought a revolution to your brewing techniques. Whether you prefer pour-over, AeroPress, or cold drip brewing, fermenting your coffee can open a new world of aromas, flavors, and coffee depth. Now, what exactly is fermented coffee? How does it stand out from regular coffee? And why is coffee fermented the new craze nowadays? This guide has the answers for you! What is Fermentation? Fermentation is a biological process where bacteria and yeast break down starches and sugar into simpler substances. Beer, for example, goes through … END_OF_DOCUMENT_TOKEN_TO_BE_REPLACED 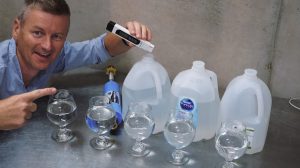 You've done the basics, learned all the steps to homebrewing, and familiarized yourself with essential home brewing gear. You've come a long way since day 1, and now, it's only natural you'd be looking for an upgrade. After all, better and upgraded homebrew gear can help you make even better, more flavorful beer. If you could make amazing beer with basic gear & equipment, how much more with an upgrade? With new flavors and beer profiles within your reach, here are 12 best homebrew gadgets to help you expand your homebrewing game Brewing Accuracy & Precision Brewing may not be … END_OF_DOCUMENT_TOKEN_TO_BE_REPLACED 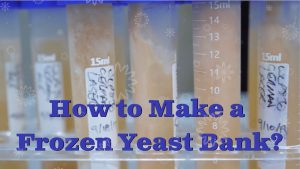 The process of making a frozen yeast bank might be apparently super-complex and scientific but it’s such a cakewalk if you get your hands on the items mentioned below. Requirements: You'll need: a pressure canner two Mason jars a 50 pack of 15 ml sterile test tubes vegetable glycerine of USP grade three lbs of dry malt extract a spray bottle of sanitizer a measuring cup an insulated box or your insulated lunchbox (pick a box that matches with your freezer's size to fit in) and some gel ice packs that can be reused Now, here are the optional items. A hand … END_OF_DOCUMENT_TOKEN_TO_BE_REPLACED 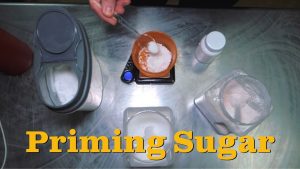 The taste and fun of the beer lies in its effervescence. Its bubbles make it fun, frothy and flavourful. The fermentation process in the first instance of preparing the beer makes it almost ready, but the bubbles are yet to be added and the product, till it’s foamy and frothy, is not fit to be called a beer. Not yet. This is where the priming sugar comes in. It is any kind of sugar that restarts the fermentation process and brings about the bubbles in the beer.   The important thing here is that priming is a process that can be easily carried out at home. Sugars of various … END_OF_DOCUMENT_TOKEN_TO_BE_REPLACED 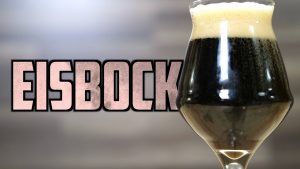 The Eisbock There are certain beer styles that homebrewers obsess over for long periods of time. I know I do. Eisbock certainly is one of those white whales that homebrewer, Martin Keen has been trying to wrap his heads around for quite some time now. He finally did it! Before we dive into the recipe, here’s a bit of history on this ever so elusive style....The Eisbock. The Legend The legend of the first Eisbock takes us back to the 1800s in Kulmbach, Bavaria at the Reichelbrau Brewery. After a long shift, an assistant brewer was instructed to bring in the barrel of Bock from outside. … END_OF_DOCUMENT_TOKEN_TO_BE_REPLACED 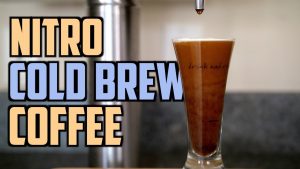 Cold Brew Coffee,.... with Nitro Anyone? I'm going to show you how you can make it, package it, and serve it so you can have it on hand at home all the time.  I'm Martin Keen and normally I'm brewing beer in my videos. But today I want to show you how to make the stuff that's coming out of the fourth tap in my bar. That is the wonder of cold brew coffee served on nitro. I'm going to show you exactly what you need to do to get Nitro Homebrew coffee at home and we'll start with what I was up to yesterday. So let's make some cold brew coffee. Now there are all sorts of gizmos … END_OF_DOCUMENT_TOKEN_TO_BE_REPLACED Cooking is one of the leading causes of fire accidents around the house. According to the reports by the National Fire Prevention Association (NFPA), these home fires can give way to thousands of home fires and fire injuries every month. If these aren't taken care of soon, it can eventually turn out to be a problem. One of the leading causes of these home fires is unattended cooking equipment. Apart from that, the unusual behavior of people, such as placing flammable equipment near the fire, is also one of the main reasons for such home fires. A simple run into another room to grab … END_OF_DOCUMENT_TOKEN_TO_BE_REPLACED Sanke vs. Corny Kegs - what are the differences? How do these kegs work? I answer these in the video above. Transcript: So the two main types of kegs are senki kegs and Cornelius or corny kegs. A good way to think about it Sanke is for commercial use corny kegs are for homebrew use. There are some people that use Sanke kegs for home brewing but it's pretty rare I do. I have to jump in here and click aside and say if you put a deposit down on a Sanke keg that doesn't mean you own it is considered theft don't do it okay acquire it legitimately legally. So corny kegs - these used to be … END_OF_DOCUMENT_TOKEN_TO_BE_REPLACED The last I checked my calendar it was only September. I am sure you were all thinking that when you saw the title, Homebrew Advent Calendar. It's okay, I totally understand. Let me explain. For those unfamiliar to the Advent Calendars. Wikipedia’s description is as follows: “Advent calendar is a special calendar used to count the days of Advent in anticipation of Christmas. Since the date of the First Sunday of Advent varies, falling between November 27 and December 3 inclusive, many Advent calendars, especially those that are reusable, often begin on December 1, … END_OF_DOCUMENT_TOKEN_TO_BE_REPLACED If you are looking for your next enjoyable hobby, homebrewing can be the right one for you. If you are beer fanatic, there is nothing better than making your beer at home and enroll in a tradition that has been around for centuries all over the planet.  One of the main things people worry about when it comes to making beer at home is the recipes and how much it cost to buy of each ingredient. Nowadays, it is not that hard to figure it all out with beer ingredient kits. Now, you don't have to feel stressed about using the right recipe online or buying all the different … END_OF_DOCUMENT_TOKEN_TO_BE_REPLACED 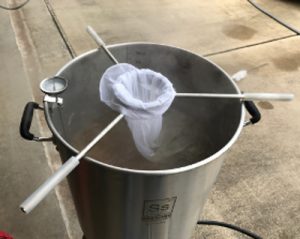 Beer, the third most preferred drink, after water and tea among people, is an excellent product after the brewing process. The brewing process involves several steps such as malting, mashing, lautering, boiling, fermenting, conditioning, filtering, and packaging. The hops are introduced in the process called boiling.  While boiling the ingredients of the beer, hops are introduced to add bitterness, flavour, and aroma to the beer. The hops are the flowers of the hop plant or hop vine Humulus Lupulus. These hops help in flavoring and preserving the ingredients in the beer.  There … END_OF_DOCUMENT_TOKEN_TO_BE_REPLACED Whether you are just starting to brew or looking to upgrade, the time eventually comes where you have to answer the question: “Which brew kettle do I even pick?” Once you go down that road, it seems like the questions keep on coming. Welded or Weldless? Two or Three Ports? What fits my budget? That’s usually when I go find another beer. In all serious, you can spend a long time researching the variety of options. Here at the Homebrew Academy, our BrewTeam have been hard at work collecting all of this information and putting it in one place. Grab a beer, sit back, and maybe you will … END_OF_DOCUMENT_TOKEN_TO_BE_REPLACED 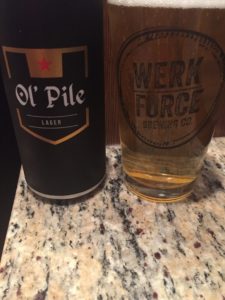 When American Light Lager is discussed in beer circles these days, the macro beer companies are front and center in our minds. Who can blame us? Mass marketing, low prices, and our own perceived dogmas of what beer was years ago play into our consciousness. Jeff Alworth from the popular beer blog, Beervana, posed an interesting poll question on social media a few weeks ago. “It’s much harder to make a pilsner than an IPA. Pilsners are so simple you can’t hide anything, but you can always just add more hops to an IPA. So let’s put ‘em to a poll.” Personally, I agree with the statement … END_OF_DOCUMENT_TOKEN_TO_BE_REPLACED