How Breweries and Food Trucks are Teaming Up 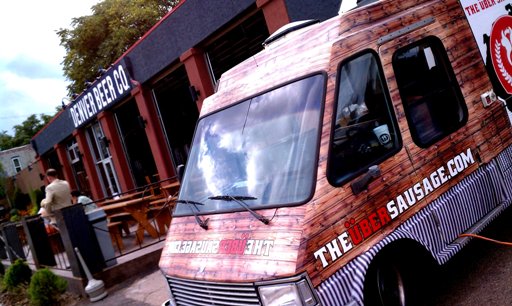 The oxpecker bird eats parasites from a zebra. The zebra stays healthy and the oxpecker gets a meal. Win-win.

Does mutualism exist in the beer world? I believe it does.

When possible, I’ve always preferred to drink a brewery’s beer at its tap room. The beer is at its freshest, you can talk to the people that made it, and drinking beer at its birthplace is just damn cool.

There’s one thing that’s missing from many of them though – food.

This is common in Colorado where many breweries do not have a brewpub. Denver in particuliar has seen an explosion of breweries recently and none of them offer food. You can’t really blame a brewery for wanting to focus on beer and not worry about forks and knives.

It’s not only the new breweries. Even established Denver breweries like Great Divide and Dry Dock are beer-only.

This might be a turnoff to customers, except that food trucks have driven in and filled the gap (and bellies). The brewery can offer food to its customers, and the food truck has a new market.

A New Breed of Food Trucks 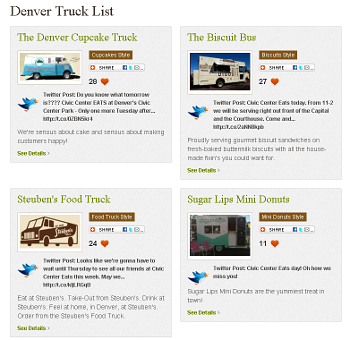 You name it, Denver's got it

I’m not talking about the shady taco truck on the corner. Yes, Denver does have tons of those, but there is another, more sophisticated group of food trucks proliferating in the mile high city.

We’re talking cuisine like wood-fired pizza, grass-fed beef, and even cupcakes. They travel all over town, parking wherever there’s a hungry crowd and using Twitter to announce their location. Hell, we even have Civic Center Eats twice per week where all of the food trucks show up in the same spot for lunch.

The Harvard Business Review wrote an article commenting on the national food truck trend. An excerpt:

“The truck and its staff of merry makers have become a sort of roving party, bringing people to neighborhoods they might not normally go to, and allowing for interactions with strangers they might not otherwise talk to.”
– LA Times

While the new breweries in Denver are taking advantage of the food truck phenomenon, Great Divide was one of, if not the first local brewery to feature them on a regular basis. I asked Great Divide’s Hanna Laney about their relationship with the food trucks.

“We were excited to be one of the first breweries in Denver that utilized food carts and we have built some relationships with some really delicious carts. Food carts are a great part of food and drink culture in Denver and we are happy to host them at our Tap Room. We see food trucks and breweries going hand in hand.

Our anniversary party was catered solely by food carts and I think that speaks to both the legitimacy and deliciousness of their cooking. After the party wound down, our staff was just hanging out and the boys from Basic Kneads stayed around, blasted music from their truck and cooked us up some delicious pizza.

We believe that good food (like good beer) is meant to be shared. These food trucks seem to have that same philosophy, too.”
– Hanna Laney, Great Divide Brewing Company

As a frequent Great Divide customer I can tell you that the partnership is a good fit. During events like the anniversary party Hanna mentioned your tickets are good for both food and beer (hurray for simplicity) plus both ends are good about announcing the food truck’s schedule via social media.

It will be interesting to see how much the food truck + brewery relationship evolves. Is it thriving in other cities? Let me know, I’m curious.

Here are some other things to think about:

Here is a final quote I want to leave you with from the Harvard article:

“Consumers are telling us that they prize drama over utility, scarcity over ubiquity, novelty over the guaranteed sameness of the national brand. They want brands that are porous to the world, that integrate with the world. They are prepared to embrace brands that take a little more effort, especially if that effort rewards them with something that is exciting and rare.”