Homebrewing is a great topic of discussion to bring up when you are out on that first date or getting to know someone that you fancy.  It sheds light into your inner complexities as a man who values quality libations and has more depth than the average person ordering “whatever’s on tap”.

Once you’ve brought up the topic of homebrew, you’re bound to get their taste-buds wondering what a home brewed beer could even taste like and if you’re any good at the craft.  This leads to a good chance of a second date and an opportunity to bring your homebrews along to woo her with your brew! 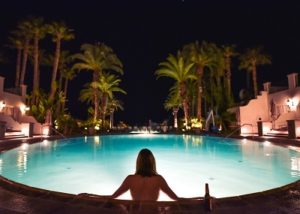 A Muse in the Brewery

When I first met my wife, my homebrewing hobby didn’t come up right away.  It was only after a couple of dates that I decided to surprise her with a Belgian Saison in a plain brown bottle and asked her to try it.  Not only did she love it, she had no idea that people could make such delicious beer on their own and she wanted try more of the beer styles I had brewed.

Realizing I had nothing to lose, I decided to brew a special beer just to impress her.  I found out she liked wheat beers, so I got to work on my next day off putting together a traditional Hefeweizen beer.  After the 2 weeks of fermenting, I decided I would jazz things up and before racking into a secondary, I blended up 5 pounds of fresh Hawaiian papaya to put into the bottom of the fermenter.

I had never had any experience with using fresh fruit in beer before and was afraid this could contaminate the beer or produce some off flavors.  Carefully overseeing the secondary fermentation, the process went off without a hitch.

After nearly a full two weeks of secondary and two weeks in the bottle, I did a taste test and was blown away!  You could taste the fresh sweetness of the papaya along with the crisp and creamy goodness of the Hefeweizen base.  I called it the Hawaiian Papayan.  It was a truly a treat to enjoy. 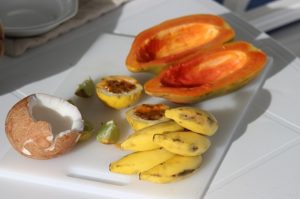 When I shared it with my girlfriend, not only was she impressed because she had never tasted a beer like that, but she was flattered that I went to all this trouble to make a beer that I could impress her with.  To this day, I still credit the Hawaiian Papayan as one of the foundations we built our marriage on!

In my Hawaiian Papayan example, the key to my success was simply racking onto a secondary full of fresh ripe fruit.  You can easily take it to the next level and add multiple layers of complexity, by adding other fruits, spices, herbs and other flavorful or exotic ingredients.  Fresh strawberries and orange peel to vanilla beans and cinnamon can really complement the other malty, hoppy flavors in your beer.

One would typically add these ingredients in two places during the brewing process: in the last five minutes of the boil, or to the secondary when you transfer the beer (as I did with my Hawaiian papayan).  Adding at the end of the boil gives you a softer, more mellow flavor.  The boiling wort sanitizes the ingredients which removes any worry of infection.  Ingredients added to the secondary gives a brighter, fresher, fuller flavor, but there is some risk of picking up an infection.

It’s important to wash and sanitize any fresh fruits or vegetables before chopping them and adding them.  You can also soak chopped fruit, whole spices, vanilla beans, and other ingredients in a little vodka or grain alcohol before adding them.

It’s the Thought that Counts

Whether you brew a super fruity Belgian Kriek Lambic or Framboise or a tasty vanilla bean chocolate coconut stout, the main goal of brewing a beer for the one you love is to show them how much you care.  By using your creativity to come up with a beer that will not only appeal to their particular taste buds you will also  inspire a whole new world of beer they never knew existed before.  It’s never too late to make your move, you have nothing to lose!

What brew do you use to woo?  Share your experiences, recipes and ingredients below.  We’d love to hear what worked for you! 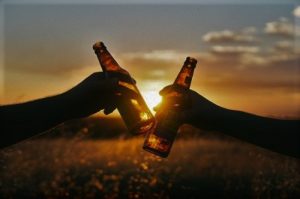