In early October I brewed a batch of beer with 100% brettanomyces that I got from Crooked Stave Brewery.

For the first week I would go downstairs and look on in disappointment as there was zero airlock activity. Did I do something wrong? Was it a bad pitch?

After 9 days I decided to pop the top on the bucket and see for myself what was going on. Sure enough, there was a thick white pellicle on top which you can see in the image above. It’s both disgusting and glorious. (I’m betting the bucket lid didn’t fully seal, which is common and explains the lack of activity)

The second picture was taken last night and you can see it’s gotten even nastier, with little puss bubbles forming. My girlfriend is disgusted that I plan on drinking this beer.

In talking to other brewers 9 days is a super fast time for a pellicle to form, leading me to confirm what I already suspected – Chad’s got the good stuff. 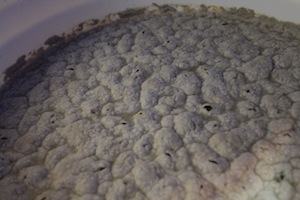 The plan was to add fruit. I found out my local homebrew store had a shipment of cabernet grapes coming in for their winemakers , so that sounded perfect. The store assured me they would have a few extra pounds, but it wasn’t meant to be. Greedy winemakers.

So now I’ve got a few options:

I’m patient so I’m just going to wait for now. I’ll probably do option #1 and split the batch – half fruited and half without.

What I do know is that this yeast has been a champion so far. The gravity reading last night was 1.004, although that was with a refractometer and the correction formula, which I don’t 100% trust. In tasting the sample, it has a distinctive barnyard aroma but the flavor doesn’t quite match it. There is still a strong pilsner malt flavor dominating.

What do you guys think? We also need to get Chris in here and see how his brett peach beer is coming, since he used the same crop of yeast.