The results are in. I took the BJCP tasting exam on March 2nd and my score was emailed on June 3rd.

That’s a relief. I was really hoping for at least an 80 because that is the score needed to qualify for National ranking.

Now I’ll tell you all about the exam in case I can help some BJCP hopefuls out there prepare. First, here is the exam feedback sheet I received with my score: 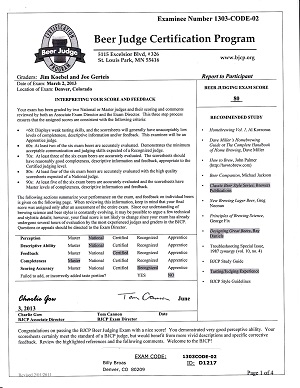 The different areas you are graded on are:

As you can see, completeness was my strongest area where I achieved a Master score. I was also pretty good at perception and descriptive ability where I got National. I was OK at feedback (Certified) and not so hot at scoring accuracy (Recognized).

I’m mad at myself for not doing better on feedback since homebrewing is my strong suit, and hell, I even teach how to home brew beer. If I were to take it again, I would pay closer attention to that area.

The scoring accuracy was my worst area. I felt confident after the exam that my scores were accurate but it turns out I was pretty far off from the scores of the three proctors who I was compared to.

We were given 90 minutes to judge six beers, so there was 15 minutes allotted per beer. For each one we had to fill out a scoresheet (pdf) and assign a score.

The beer styles could be any one of the subcategories in the 23 BJCP Beer Styles. We weren’t told ahead of time what they’d be and we couldn’t use the guidelines during the exam, so we had to memorize the them beforehand.

Here are the beers we judged and their consensus scores as given by the three proctors (National and Master judges) in the room:

For 4/5 beers my scores weren’t terrible, being within 5 points for three of them.

The Flanders Red was by far my worst and really hurt my score. The funny thing is that I was the most confident that I got this one right. I had heard that in the tasting exam there is usually one beer that has serious flaws and scores very low. When this beer was brought out and I smelled and tasted it, I was sure this was the loser in the bunch.

Anyone who knows me knows that I love sour beers, so it wasn’t a case of me just not liking this particular style. La Folie (a Flanders Brown) is one of my all-time favorite beers.

But this Flanders Red was completely undrinkable. I couldn’t take more than a sip because the sourness was so overwhelming. It was like straight vinegar. There were even people in the room coughing.

You’re not supposed to rate a beer lower than 13 because it’s somewhat insulting to the brewer. I gave it a 16 which put it in the “Fair” range and I felt that was somewhat generous.

Well it turns out the proctors actually loved it – they gave it a 42! Yep, I was 26 points off. Ouch!

Because I rated this beer so low I also got low scores on the other categories (I couldn’t perceive or describe anything other than awful vinegar). So that one hurt, but oh well.

My Advice On the Exam

Here’s what you should do if you want to score well on the exam:

Also just drink a lot of beer in general. I don’t think I had to tell you that though.

By scoring an 80 I qualified for National ranking by the skin of my teeth, so getting to that rank is the next goal. In addition to at least an 80 on the tasting exam you need at least 10 judging experience points to take the written exam. I only have one judging point and the exam I signed up for is in March of 2014, so it’s going to be really difficult to get nine more judging points by then. If I can’t make it, I’ll just take the exam at a later date.

Overall I’m really happy with my score. I need to work on my scoring accuracy but that comes with judging experience. Given that my perception scores were high (the “palate test” – the thing I was most worried about) and my accuracy was low, that tells me that I just need to calibrate my scores to those of more experienced judges.

Let me know if you have any questions about the exam. Here’s the full write up on how to become a beer judge.

It’s good to be finally be a judge!