Last week I ran a poll that asked this question: How do you feel about Big Beer buying craft breweries? 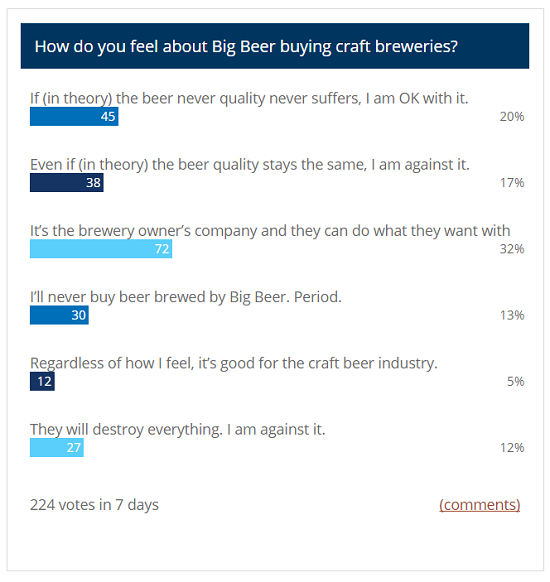 The first thing that jumps out at me is the response to this question: “It’s the brewery owner’s company and they can do what they want with it. I’m OK with it.”

Not how many voted “Yes” to that question, but how many did NOT vote “Yes” (note: you could choose more than one answer in this poll).

Really? In your mind, the brewery owner can’t do what they want with the company?

More on that idea in a minute, but I’m guessing my inclusion of the second sentence in that answer, “I’m OK with it”, may have skewed the results.

This is a little talked about divide among craft beer consumers. And it’s only going to get more and more apparent as craft breweries get swallowed up by the big boys.

How did I vote?

On the first answer, I’m in the camp that cares more about beer quality than who makes it. Craft breweries have been over-coddled in my opinion. To the point that many of them have gotten complacent and are pouring awful beer while relying on “the craft beer movement” to keep the cash register ringing.

Craft breweries should be held to a higher standard. Jeff Alworth put it brilliantly in his recent Beervana article:

…the beer industry should not depend on the kindness of customers to keep them afloat. They are not charities we need to support with our dollars. And indeed, to do so perverts the market and keeps weaker (and less scrupulous) players in the game.

I agree 100%. And because we vote with our wallets, I buy based on quality — regardless of who brews it.

As for #2, it drives me nuts when armchair critics see Big Beer buy out a little guy and shout “Sellout!”

Look, starting and operating a craft brewery is backbreaking work. Talk to a professional brewer sometime. Ask them if it’s really as glamorous as the commercials make it seem. I’m sure they could use a good laugh.

If you think someone starts a brewery because they think it’s the best way for them to “cash in” someday — you’re nuts.

So imagine a brewer has been at it for 5, 10, maybe 20 years…and they’ve sacrificed family life, vacations, relationships…then a big brewer comes along and say, “Hey, you’ve done a great job, but we’ll take it from here. You go relax, pursue another interest, or do whatever you want to do.”

…and the brewer gets a nice pay day. Good for them! Why shouldn’t they be rewarded? To become a target for Big Beer means they must have done something right.

If the people chastising the “sellout” brewery owners actually walked a mile in their shoes, I’m sure they would sing a different tune.

Did you know I have a crystal ball?

Because how else would I have known to publish that post just a few days before the AB Inbev and SABMiller deal? Assuming it goes through, and it probably will, things should get REALLY interesting with these topics we’ve been talking about.

I know some beer fans are absolutely freaking out about this deal. I’m not so worried about it.

But hey, even if the big boys really do destroy everything like some people who voted in that poll believe…you can always learn to homebrew.