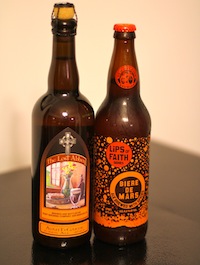 It’s getting pretty damn hot outside and you might be tempted to cool off by reaching for a summer beer staple – the Saison.

But slow your roll.

Take this opportunity to try a lesser known beer style that will remind you of a Saison but offer something a little different.

Biere de Garde is the French cousin of the Belgian Saison. They live just across the border from one another and are both known as farmhouse ales. I like to think they’re friends.

I’ll leave it to The Beer Hunter to fill you in on the rest:

“The name means “beer to keep,” implying that it was laid down as a provision to be drawn upon during the summer. The style belongs to northern France, and bieres de garde often appear in champagne bottles. Traditionally, they were top-fermenting, and some still are. They have a malt accent and an ale-like fruitiness, often with spicy notes, and are medium strong to strong in alcohol.”
– Michael Jackson

Saisons are huge in American craft beer with some breweries only brewing them and nothing else. Biere de Garde – not so much.

There is even a variation of Biere de Garde that is even less common, the Biere de Mars, a seasonal beer brewed in March.

I wanted to give Garde and Mars a shot and also compare them, so I sought out some bottles locally. Fortunately I was able to find an example of each with Lost Abbey’s Avant Garde and New Belgium’s Biere de Mars. 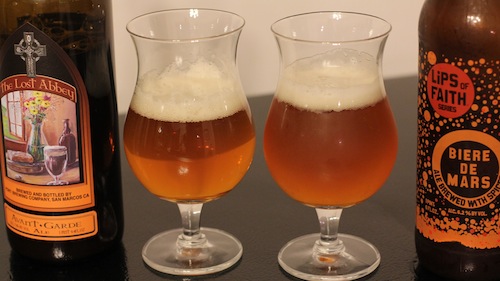 You can see in the picture that they look almost identical. The Mars had some chill haze but after it warmed up it was near impossible to tell them apart.

The aroma is where they parted ways. The Mars had a slightly chalky smell with hints of honey and fruity esters. There was also some funk from the Brett used at bottling. The Avant Garde on the other hand was much more musty. The BJCP describes it as “cellar-like”, which definitely came through. There was also more pilsner malt and tartness.

In the flavor I got more fruit, hay, and sweetness from the Mars. The Garde had a bitter orange peel flavor that stuck out, and well as some spicy flavors. I thought it would be more tilted towards the malt side than it was.

Overall these beers had much more in common than they did different. It’s obvious that they’re in the same family of styles. Hell, with the wide range of Saisons out there, you could even call these Saisons and get away with it.

Picking a winner wasn’t exactly the point, but I enjoyed the Biere de Mars a bit more. Try them both if you get a chance.

Here are some other ones to try:

Have you tried any examples of these styles? What did you think?