Did you know the name Berliner Weisse is a protected name in Germany and is only allowed to be used on Berliner Weisse beers from Berlin? I also found out was that the whole name thing is not really enforced, but I’m not taking any chances.

So this post is Part 1 of what I hope to be a 3 or 4 part post that will end with my the completion of my first Sour (and hopefully drinkable).

I have been homebrewing for quite a few years now, but it wasn’t until recently that I even thought about brewing a sour. Actually, it really has only been the last 4 or 5 years that I have found sours that I really enjoy drinking. My earliest memory of any type of sour was Samual Adams Cranberry Lambic. Although I would not say it’s at the top of my list, I still have some fond memories of this Fall staple.

Combined both (no boil) in the apple juice jar, swirled to mix and capped with airlock. Kept the starter at 70+ degrees. I tried to keep the starter as warm as could, by keeping it in a cooler wrapped in a few towels and a heating bag, that I would stick in the microwave every so often. I got the idea for the lacto starter from Matt Becker of Small Batch Brew and got some guidance from The Mad Fermentationist. Both are great resources for homebrewing.

Boiled the DME and water for 15 minutes and cooled in an ice bath until temp fell to about 70 degrees. Combined yeast and wort mixture in a growler and capped with a stanitized foil “cap”

Let me start by saying this was not a stellar brew day. Rushing around, not fully prepared and it seemed I was behind during the whole brew.  However, this brew day was a day for “firsts” for me.  Starting with my hopping.  All the hops for this batch went into the mash tun, no boil hops.  Secondly, this is my first true step mash.

I did have a couple dumb moves, and the first one;  I was not prepared to brew a 4-gallon batch.  Oh, I had enough supplies, but what I did not have was a way to measure 4 gallons of wort (plus boil off).  So I guessed…I mean “guesstimated”.

Since I was only doing a 15 minute boil, all I really needed was 4 1/2 gallons at the most.  Because of my lack of measurement devices and not wanting to run short, I pulled too much (hind sight).

I went with a 4 gallon batch because the only glass carboy I had available was a 5 gallon and I did not want to push the limits.

After the boil and cool down were completed, I proceeded to fill the carboy. Lucky for me, I had already marked the 4 gallon spot with a sharpie. After getting to the 4 gallon mark I looked in the kettle and had easily 1-1/2 gallons of wort still in it.  So at that point I made the decision to up the batch size to 4-1/2 gallons (may end up as another dumb move). That all being said my OG and TG based on the recipe could be way off, but the numbers came in pretty reasonable.

With an OG of 1.030 it means my mash efficiency was around 60%. It’s sounds bad, but with only a 15-minute boil the whole efficiency thing goes out the window.

Let’s check in on the fermentation. ..

When the brewing process was done, it was time to pitch the Lacto starter. The yeast starter would come 24 hours later. What happened next caught me totally of guard.

I was at work and got a call from my wife concerned about exactly “what my beer was doing“.  The air lock was bubbling away and the top of the carboy was getting filled with a crystal foam like substance. Knowing that I had not pitched the yeast I thought she might be over reacting a bit…..WRONG.

When I got home a found a most unique (at least for me) site in my carboy, as you can see in the picture. 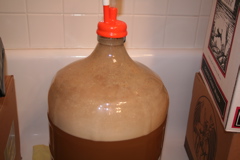 I decided the best approach would be to stick to the plan and pitch the yeast starter. After the pitching the yeast and shaking up the carboy I employed the use of a blow-off and not the air lock.

Fermentation was uneventful and the carboy sat for 3 months until I decided it was bottling time.

At  2.8% ABV this puts it on the bottom end of the BJCP 2008 Style Guidelines. The sample I tasted at bottling gave a light sourness, but the flavors balanced very nice. I’m not sure the sourness will build any more with time, but if not I’m still happy and when carbonated it should be a real nice summer beer. 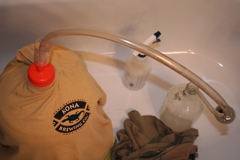 The entire batch was bottled and although I will let most of it sit a couple more months, I am going to submit the beer to the local Fair Competition. I’m not expecting much, but the feed back from the judges should be helpful in brewing my next batch.

Berliner Weisse results are in. I have to say that regardless of fact the beer missed a little on the style guidelines of not being tart enough, I just love this beer. Simple, clean and really a crowd favorite.

Now on the judging.  I submitted this beer to the 2011 Orange County Fair “Homemade Beer Competition”. The 3 judging scoresheets that were returned scored the beer 30/30/27.  All the judges had the same 2 general comments “Good Base Beer” & “Lacked Tartness/Sourness”. 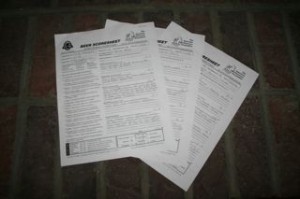 I’m very pleased that the judges liked the beer for overall quality. In addition, I would have to say I agree 100% with the comments that it lacked in tartness/sourness, because it did. Knowing that I have a solid base beer it really allows me to play with souring.  In fact, I just bottled the second version of this beer and I’m really happy with the level of souring on this batch.

Getting back to the judges comments that really hit home for me.

“No Off Flavors” “Refreshing” and my favorite “Great drinkable wheat, effervescent. Lacking in sharp sour character of a Berliner, but hits every other point. If this beer had a lactic character, it would be a 40+ points”

This was the first time I had ever entered my beer in this type of a competition, and I’m really glad I did.  I entered a total of 4 beers; American Wheat, IPA, American Brown (3rd place) and the Berliner.

Regardless of what you think your beers are, I would encourage all homebrewers to enter at least one competition. Why I waited so long…I don’t know, but I’m already working on ideas for upcoming events.