Sometimes limitations are good. Originally, I wanted to bring you the next in an on-going installment comparing saison yeasts.

But sometimes the homebrew gods have other plans…

I didn’t find what I wanted, but the yeasts I found inspired, what I think is a better idea. Today I am going to introduce many of you to the humble Belgian Pale Ale. It not a style that is easy to find in the US. It is not as distinctive as a saison.

The Belgian Pale Ale much like its American IPA counterpart is a tough style to master because it is subtle.

It is a balanced beer with some Belgian phenolic character (but not a lot) with lower alcohol than many popular Belgian styles.

I think brewing this style is a great test of a brewer. It takes some finesse. Making a drinkable, moderate to low alcohol beer with balance, is in my opinion, one of the most difficult brewing tasks.

I love almost all Belgian Styles. Most of them are very distinctive. The Belgian Pale Ale is distinctive in its ordinariness. It is a beer to drink on a Wednesday with dinner or when you want a few Belgian beers with friends without overdoing it.

Sure, saisons, dubbels, and triples are great beers, but unless you are brewing petite saisons (which you should by the way) they are mostly big beers. The humble Belgian Pale is a good beer for Summer. It is a beer you can serve to your homebrewer friends and American pale lager drinkers.

Let me start by saying, I am not a beer style expert. Maybe someday I will get my BJCP certification, but I haven’t yet. This overview is my evaluation of the style.

The first and best reason to brew a BPA is that commercial versions in the US craft brew scene are pretty rare. Like a lot of homebrewers, I started brewing because a lot beer styles were not commercially available.

The point of the BPA is to have an easy drinking, slightly malty, beer with some Belgian yeast character. The bitterness is fairly low concentrating on hops from the flowery, herbal spectrum.

For your first version, I would stay with noble hops and branch out from there.

I am using Super Styrian and Challenger for this beer. If you haven’t used either of them, I think they are great for Belgian styles and lagers.

For malt, like most Belgian beers pilsner malt dominates. Frankly, my recipe for saison, BPA and German Pilsner are not very different. I add some caramunich to increase the maltiness.  Caramunich makes up just over 7% of the grist. 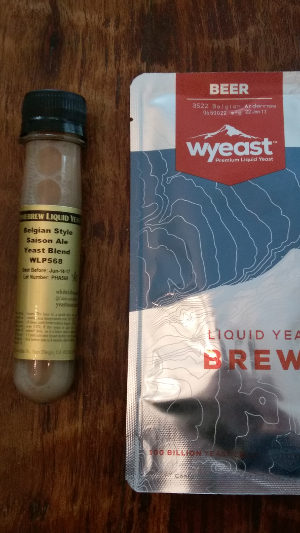 The yeast strains chosen for this experiment are the Belgian Ardennes – Wyeast 3522 and Belgian Style Saison Ale Yeast Blend – WLP568. I have never used either yeast strain. I rarely venture into liquid yeast these days.

The Belgian Ardennes is the more classic of the strains for making a BPA.  According to Wyeast it is more flocculent than most Belgian strains and will produce a brighter beer.

The WLP strain is a blend of saison strains.  In order to produce a good BPA, I am fermenting both beers at 64F to start and ramping to restrain the yeast character.

The efficiency on my split batches continues to be higher than I expect.  If I ever figure out why my efficiency is jumping 10-points for larger batches, I will write an article on it.

I adjusted my volume to level out the higher gravity and brought back in-line with a 1.055 starting gravity.  I cooled my wort to 64F and filled both fermenters.

I used both yeasts without a starter.  I hit both worts with 1.5 tsp yeast nutrient and 1-min of O2.

Both fermenters were held at 64F for the first two days.  A kruesen was present in both fermenters within 24-hours.  The Wyeast started more robustly.

After day 2, I ramped the temperature 1 degree F per day until I hit 73F for several days.  After checking my gravity, both beers terminated at a 1.010 FG.

I cold crashed both beers and added gelatin.  I then kegged and carbonated the split batch.

For the evaluation, I wanted to get more feedback. I have a decent palate for some things, but I wanted to validate my thoughts with other experienced brewers.  I recruited a BJCP judge and one in training to help with the evaluation.  This time around, the evaluation will be blind and scored like it is at competition. I snuck in a commercial version of the style as a control and comparison point.

I have to say that this was more fun than I imagined. It was a lot of fun listening to both judges puzzle through the beers while doing the blind judging.

This was a fun experiment. The tasters were blind to the nature of what they were tasting.  The difference between the split batch beers was pretty shocking.

The BPA is a great style. I definitely recommend giving it a try.