The Inside Scoop on the Beer Vending Machine 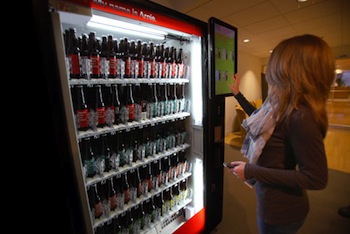 Have you heard about the tweeting, beer dispensing vending machine named Arnie?

If not, you can read about it here.

In short, it’s for the employees of the Arnold advertising agency in Boston. Talk about a pleasant work environment.

As a beer geek, I wanted to find out more about the brews this thing is popping out. Below is a Q&A with Greg Murphy, the self described Social Media Manager and Resident Brew Master at Arnold Worldwide.

Who brews the beer for the vending machine?
A team of 3-4 people, including myself, brew the beer at Barleycorn’s in Natick, Mass., which is a Brew on Premise (BOP) business.

How were the beer styles decided? Were there requests from Arnold or was it mainly up to the brewer?
The beer styles are based on level of expected popularity, seasonal styles and, now that the machine is in operation, ratings. The first run was up to the brewers and, going forward, we’ll take the preferences of the agency into account. For our first run, we brewed six styles of beer: a Pilsner, a German Alt (old style) ale, an IPA, an Oktoberfest (like Spaten), a Kölsch and a Scottish Ale.

Has the vending machine converted anybody to craft beer who previously wasn’t a fan?
I’ve heard of several folks who have tried new varieties because of the machine. People who usually “stick to Miller” have the opportunity to try some new styles. We’d like to think it will encourage others to check out other small breweries.

The machine has a “data visualization feature”. Do you know which beers are the most popular?
The data visualization allows users to see their beer consumption history. Our highest-rated beer since the launch on November 2 is our Kölsch

A few comments. The fact that these were made at a Brew on Premise was surprising – I figured they were made at a contract brewery. I’ve said before that I like the BOP idea and this is a benefit I hadn’t thought of. You could turn it into a sort of employee bonding experience (and then drink the fruits of your labor).

The range of beer styles is impressive. I was expecting a stout, pale, amber, and brown, but to see that they made an Alt and Scottish ale says something about the evolution of American beer culture.

Thanks to Greg for the responses.

This is one of those things you talk about with your buddy at the bar (“Dude, what if the vending machine at work served BEER!?!”) but never expect to actually happen. Very cool. 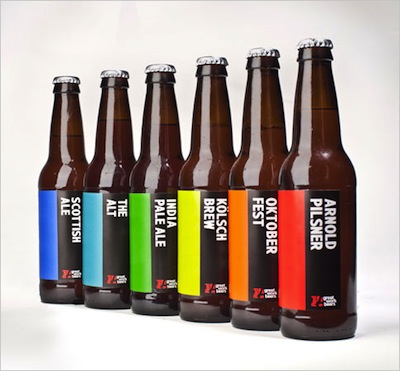